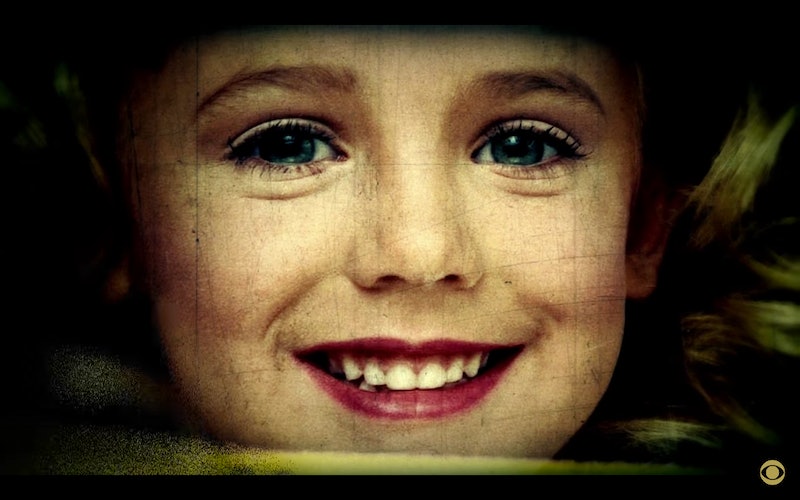 The murder of child beauty pageant star JonBenet Ramsey captured the nation’s attention in 1996, and the CBS docu-series The Case of: JonBenet Ramsey is reigniting interest in the unsolved case. Of the many still-unanswered mystery surrounding the death, one particularly grisly one looms large: What was the murder weapon in the JonBenet Ramsey case?

The reason this question is so hard — and perhaps not possible — to answer is that it’s still unclear precisely how Ramsey was killed. As long as that’s the case, it will be impossible to say with certainty what the literal murder weapon was. There are some theories, however.

When Ramsey’s father John discovered her body in the basement of the family home the day after Christmas, she had a garotte wrapped tightly around her neck. On one hand, this could suggest that strangulation was the cause of death. However, Ramsey also had a skull fracture, which conversely points to head trauma as the cause of death.

So, which was it? The coroner’s report isn’t very helpful — it lists her official cause of death as “asphyxia by strangulation associated with craniocerebral trauma,” essentially not taking a position on the matter. According to these reports, it seems as though it could have been either gruesome method.

Still, those following the case aren’t entirely in the dark here. If Ramsey was indeed strangled to death, the garotte around her neck was probably the murder weapon. And if she died due to head trauma, on the other hand, then whatever caused that trauma is the weapon. For this reason, many investigators have asked: what is the source of Ramsey’s skull fracture?

In The Case of: JonBenet Ramsey, forensic scientist Henry Lee casted doubt on the flashlight theory on the grounds that there was no hair or DNA on the flashlight in question. Spitz, however, argued that a flashlight could break a skull without breaking the skin or tearing out any hair.

It’s entirely possible that we’ll never know who killed Ramsey — and we may never know what killed her, either.