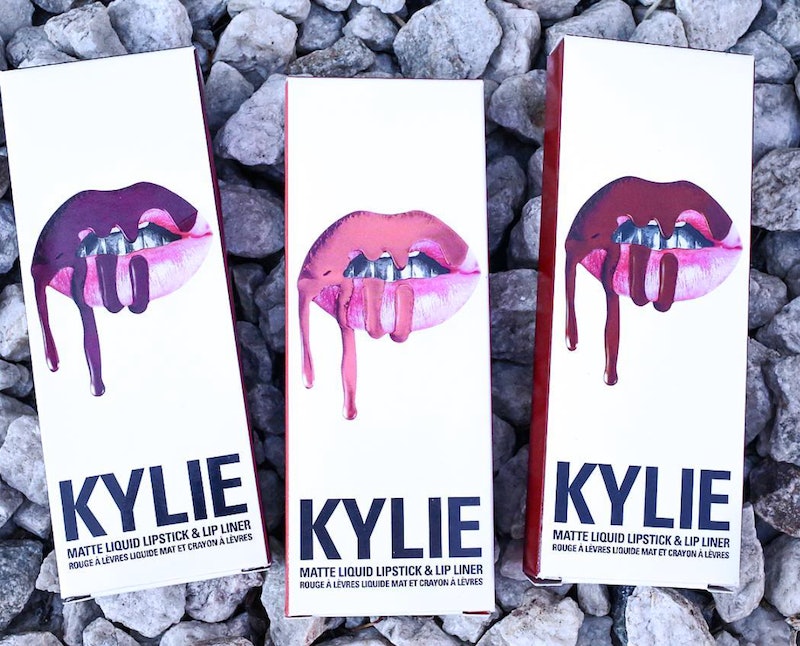 Kylie Jenner's full, velvety lip look remains incredibly popular. The matte Kylie Lip Kits are constantly selling out, even with increased stock, a wider variety of shades to choose from, and the fact that the liquid lippies and their matching liners are now sold as singles. For a while there, Candy K, which is one of the original three Lip Kit shades, was the brand's best-seller, since it's a universally wearable, warm x pinky nude. But its position atop the Lip Kit throne has just been usurped by a rather new color. Which Kylie Lip Kit is the most popular shade? It's actually one of her summer colors that now reigns supreme.

The strawberry red Kristen Lip Kit is the new best-selling shade, which the brand confirmed via its Instagram account. Kristen is officially described as a warm, red berry and was named after her mother, Kris Jenner.

For a while there, Jenner herself admitted to loving Candy K the most, before changing her mind and naming the nude Exposed her fave Lip Kit. But her fans and customers have spoken, scooping up the Kristen Lip Kit more often than any other shade in the range.

It's obvious that the Kristen Lip Kit is a hit.

If you've yet to purchase Kristen, how about some inspo?

Congrats to Kristen on becoming the most popular of the KLKs.

Kristen is one of the most unique Lip Kit hues. It's rich and red, but not in a traditional way.

This swatch of the matte liquid lippie and the liner is totally aces. Wouldn't it look divine slicked across your pucker?

Here is more Kristen for your life and your lips.

Kristen made her debut this summer alongside Ginger and Maliboo.

Kristen and her namesake are the Kweens!

This is what Kristen looks like on Kylie. Maybe this news will inspire you to grab a Kristen Kit.