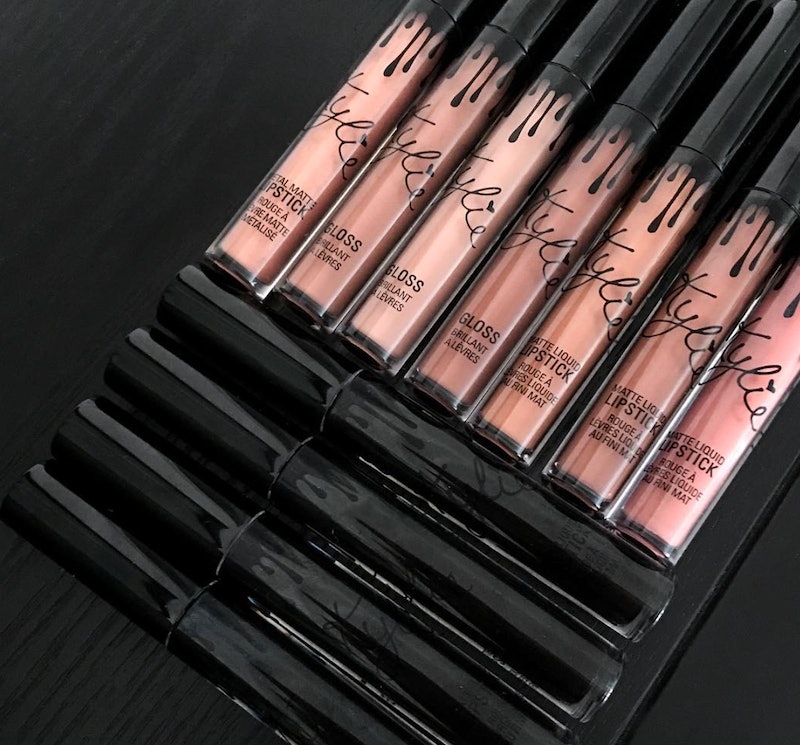 The Kylie Cosmetics empire has rapidly expanded in the past year. With the addition of Skylie and Freedom, her limited edition blue Kylie Lip Kit shades, which go on sale on Friday, June 24, there are 19 total products in the Kylie Cosmetics family so far. That doesn't include the Lip Kit liners, BTW. That number will increase to 22 when Jenner finally launches the three summer Lip Kit shades she has teased. Which Kylie Lip Kit shade is Kylie Jenner's favorite? I know. That's like asking the makeup mogul to choose her favorite child, since they are all her "babies." There well over a dozen shades in a variety of textures, ranging from the matte Lip Kits to the Glosses to the Metal Mattes, so it can't be an easy choice. But Jenner does indeed have a brand new favorite and it won't shock fans or KLK lovers, since it's once of her signatures.

Previously, Jenner confirmed Candy K as her favorite Lip Kit shade. That made sense, since she has so often rocked a rosy nude lip look. But Candy K has been supplanted by another shade in the same color family.

According to an Instagram post on the official Kylie Cosmetics feed, the cool-toned, true nude Exposed Lip Kit is Jenner's fave. I am not shocked.

Exposed is a super wearable nude. Jenner was rocking light contacts in this shot, so she looks extra different. Eyes aside, Exposed really does highlight and enhance her pouty pucker.

This is me rocking Exposed, which I love, earlier this week. It doesn't wash me out nor does it look muddy against my super light skin. I can also wear it with all sorts of eye looks, like a black cat eye or smoky and bronzed. It's one of my faves, along with Candy K and Koko K. It also doesn't budge. Like... at all.

This shot of the black Dead of Knight Lip Kit juxtaposed against the variety of nudes demonstrates the depth and breadth of the Kylie Cosmetics lip offerings.

The new "blues" exist at the other end of the color spectrum.

While Kylie Lip Kits started out with a variety of neutrals and goes-with-anything shades, she has truly expanded and experimented, as the limited edition blue hues indicate.