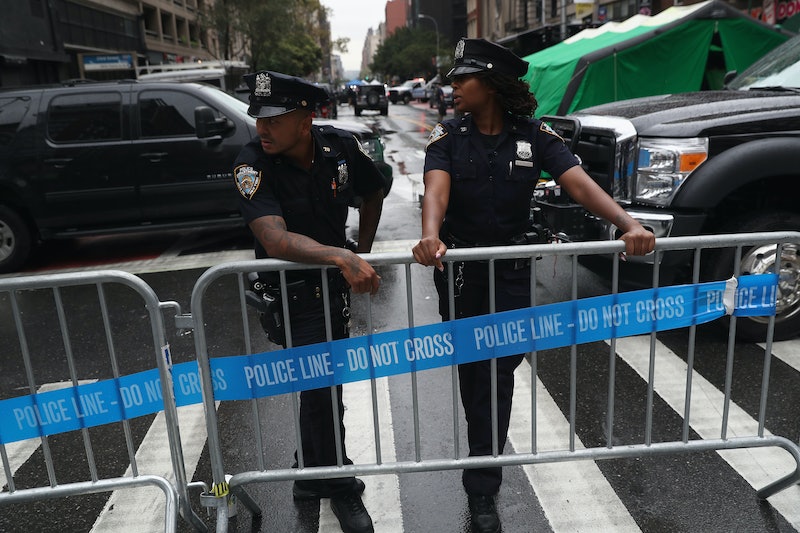 Over the past 24 hours, evidence related to the New York City and New Jersey bombings over the weekend — which injured 29 people in New York on Saturday night, and narrowly avoided hitting runners in a charity race in New Jersey on Saturday morning — has been uncovered which has led some to believe that the bombings were linked. Some evidence also seems to possibly show that all the attacks were were committed by a terror cell. Details are still murky, but the suspect linked to both attacks, Ahmad Khan Rahami, is now in police custody. Many Americans felt scared for their safety this weekend and continue to do so, which may lead us to wonder: when did bombs become part of the terrorist arsenal? And how long has the fear of a bombing attack been part of existing in our society?

Neither terrorism nor bombs are modern inventions. The bomb itself was developed in ancient China as a military weapon, though it didn't reach Europe until around the 1400s, when it was first used in France as a part of military actions.

Tracing the history of terrorism, meanwhile, depends on your definition of the word. The Guardian (UK) points out that the word originally meant "government by intimidation," and was first used in 1795 to describe the French "Reign of Terror," a period of the French Revolution in which revolutionaries seized control of the government and executed noblemen and others believed to be "enemies of the Revolution."

Today, "terrorism" means action against governments; as The Guardian notes, the UN and other governing groups define terrorism as "Premeditated, politically motivated violence perpetrated against noncombatant* targets by subnational groups or clandestine agents, usually intended to influence an audience." (The asterisk defines noncombatants as either civilians or military professionals off-duty.) But there's another strand, called "individual terror," that involves the targeted assassination of certain individuals for the promotion of a political movement or ideology.

But though "terrorism" is a fairly new word, the concept is anything but; the first terrorist organization in history, arguably, were an anti-Roman Jewish splinter group in the 1st century AD who assassinated key high-ranking members of society.

When it comes to the use of bombs as terrorist devices, though, we can trace the roots back only a relatively short way: the end of the 18th century.

1200s: The Chinese Invent The Bomb

We know that the Chinese were responsible for the development of the bomb as a military concept; they appear to have first used hollow bamboo as devices in which to store the explosives. But in 1207, historians note that the siege of the city of Xiangyang involved the use of "thunderclap" bombs, which had a cast iron shell and a long fuse, rather like the bombs you see in cartoons. The bombs spread across the region; when the Mongols invaded Japan in the 1280s, images from the time show them throwing thunderclap bombs at Japanese samurai, who understandably look alarmed by this turn of events.

One of the first organizations to use widespread terrorist tactics to strike fear into the heart of the populace and put forward a political agenda were the "Fenians" — Irish nationalists who demanded Irish independence from England. From 1881 to 1885, they mounted a sophisticated bombing campaign across England, including a series of bombs detonated on the London Underground. In Blood & Rage: A Cultural History Of Terrorism , Michael Burleigh describes one factory in which bombs were made — a paint and decorating business that gave the group a cover to purchase chemicals, and provided a strong smell to obscure the scent of bomb-making.

One of the most famous examples of individual terror in history, the assassination of Czar Alexander II, Emperor of Russia, in 1881 was the work of the Russian revolutionary terrorist organization Narodnaya Volya, which utilized acts of terroristic violence to promote its aims. Alexander II was the target of several of their bombing campaigns, but in 1881, he was killed as he traveled to a military event in St. Petersburg. The first bomb, thrown at his carriage, didn't kill him; but a second terrorist threw another bomb that wounded the Czar fatally as well as the terrorist himself.

In possibly the first use of bombing as a terrorist weapon on American soil, a bomb was thrown at the police during a labor demonstration in Chicago, causing the deaths of seven officers. The bomber was never caught, but seven anarchists (who ran or were involved with a newspaper discussing anarchist ideals) were charged with conspiracy, and four were hanged. The entire situation remains extremely complicated; many people viewed the prosecution of the anarchists — all of whom were German immigrants or of German descent — as a miscarriage of justice, and historians continue to argue whether the evidence actually implicates any of them enough for the guilty verdict.

1894: The "First Terrorist Of The Modern Age" Detonates A Bomb

In the 1890s, several bombs were set off in public places in France, again as an apparent attempt by anarchists to provoke political change and show their disgust at the bourgeois. The one most of interest to historians, though, is the 1894 Paris bombing by Emile Henry, who targeted not officials or prominent individuals but a cafe of innocent civilians. The BBC calls him "the first terrorist of the modern age," as he'd targeted civilians alone (it was apparently motivated by the desire for revenge regarding the execution of an anarchist colleague).

However, he was not the first to bomb a French cafe. An earlier French anarchist, Rachavol, had got himself into trouble in 1892 by talking at a cafe about his bombing exploits (he'd bombed the house of a judge who had previously put other anarchists on trial); in retribution, Rachavol's friends bombed the cafe, killing two. Randall D. Law, in Terrorism: A History, pointed out that Rachavol himself was more memorialized in France at the time that the civilians who were killed: people used the verb "ravacholiser" to mean "to bomb".

1906: A Bomb In A Bouquet Disrupts A Royal Wedding

Anarchy was also the reason behind bombing terror attacks in Spain in the early 1900s — though these attacks were of the individual terror kind. King Alfonso XIII and his new bride, Victoria Eugenia, narrowly escaped tragedy in 1906 when their bridal carriage was targeted by a bomb thrown from the crowd by the anarchist Mateu Morral, hidden in a bouquet of flowers. The bomb killed 15 people and injured over 50, according to Gerard Challand's History Of Terrorism , but the couple themselves somehow survived, while Morral killed himself during a struggle with police.

Can we call suffragettes "terrorists," even if we sympathize with their aims? It's an open question in history, but it's important not to gloss over the realities of the suffrage campaign in England: suffragettes planted bombs around England, from Kew Gardens to Westminster Abbey, and even in the houses of political opponents. They also committed arson attacks on prominent buildings (and the Kew Gardens tea house, for some reason). They caused no deaths, but contemporary opinion remains divided as to whether whether they deserve the term "terrorist".

1914: A Bomb Intended To Kill Rockefeller Goes Off Too Early

In 1914, a Italian anarchist, Luigi Galleani,and some followers plotted to assassinate John D. Rockefeller Jr in the name of "worker's rights." The three "Galleanists," as the followers were called, were killed when the bomb went off prematurely in one of their apartments in Harlem. Galleani was deported in 1919 after being linked to a wide range of bombing activities; but he's still widely believed to be indirectly responsible for the 1920 bombing of Wall Street that killed 38 people.

By this point in time, bombs had shifted from the outskirts of terrorist activity to the very center. From the 1910s onwards, bombs have dominated the terrorist arsenal, from the 1921 killing of 100 soldiers in Romania to the time bomb detonated on a Phillipines airline in 1949. The bombs themselves evolved, but the NYC and New Jersey bombings are part of a long legacy of terror, in which the bomb is used as a primary method of inflicting suffering and creating fear.

More like this
5 Ways To Stand In Solidarity With Women In America From The UK
By Sophie McEvoy
How To Fight For Reproductive Rights, Based On How Much Time You Have
By Courtney Young
Boris Johnson’s Leadership Is In Question – Again
By Bustle UK
Windrush Victims Are Still Waiting For Compensation
By Sam Ramsden
Get Even More From Bustle — Sign Up For The Newsletter