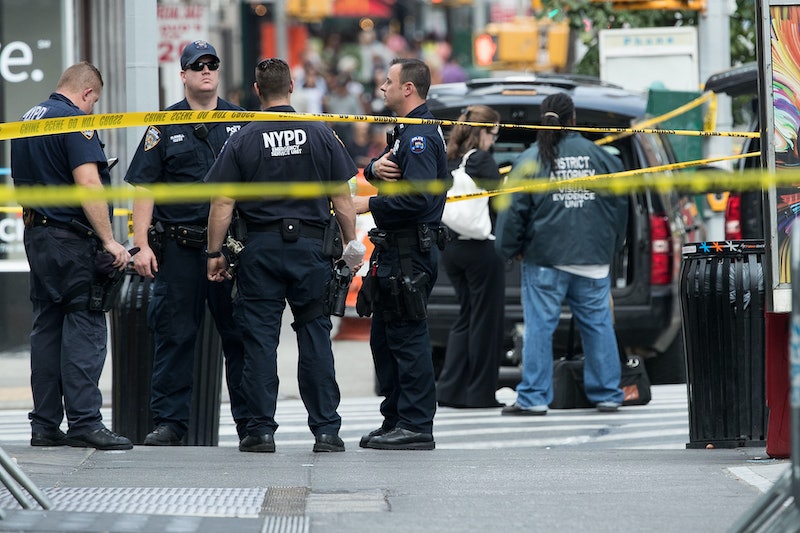 Following a weekend with bombings in New York and New Jersey, and the discovery of several more explosive devices late Sunday night in Elizabeth, authorities said that they suspect a possible terror cell may be operating in the two states. The news was first reported by NBC News reporter Tom Winter on Twitter, citing law enforcement officials. A later piece from several NBC journalists including Winter reported that several law enforcement officials fear an "active terrorism cell with multiple players could be at work in the New York-New Jersey area."

One of those "players" would theoretically be the suspect law enforcement identified Monday morning. Ahmad Khan Rahami, a 28-year-old whose last known address is in Elizabeth, is wanted for questioning and "should be considered armed and dangerous," according to the wanted poster that the FBI released. Mayor Bill de Blasio has urged the public to call 911 if they see him, noting again that he's potentially armed.

These developments came out the morning after more explosive devices were discovered, notably in Elizabeth, by two homeless men that were searching through a garbage can. They found a backpack, took it, but then left it on the street and went to tell police when they saw pipes and wires protruding from it. There were three pipe bombs and two smaller devices. One of them exploded as the FBI bomb squad tried to defuse it just after midnight. No one was injured.

Also of interest are five people who were stopped for questioning Sunday night but have not been charged. They were crossing the Verrazano Bridge from Staten Island into Brooklyn when they were pulled over. They all are thought to live in New Jersey and were headed to the airport; they are currently in custody.

Officially there's no word on whether the different attacks and explosive devices are connected. There are the two in Chelsea (one of which went off Saturday night injuring 29 people) and those that detonated along the route of a charity race in Seaside Park, New Jersey, Saturday morning. Plus, of course, those from Sunday night. Despite the lack of public confirmation, some law enforcement officials have told ABC News that they believe they are connected.

Also acknowledged for the first time was a possible foreign terrorism connection. De Blasio speaking on ABC's Good Morning America said, "It is certainly leaning more in the direction that this was a specific act of terror." That was seconded by New York Gov. Andrew Cuomo who told The New York Times, "I would not be surprised if we did have a foreign connection to the act." Both had tried to downplay that possibility on Sunday.