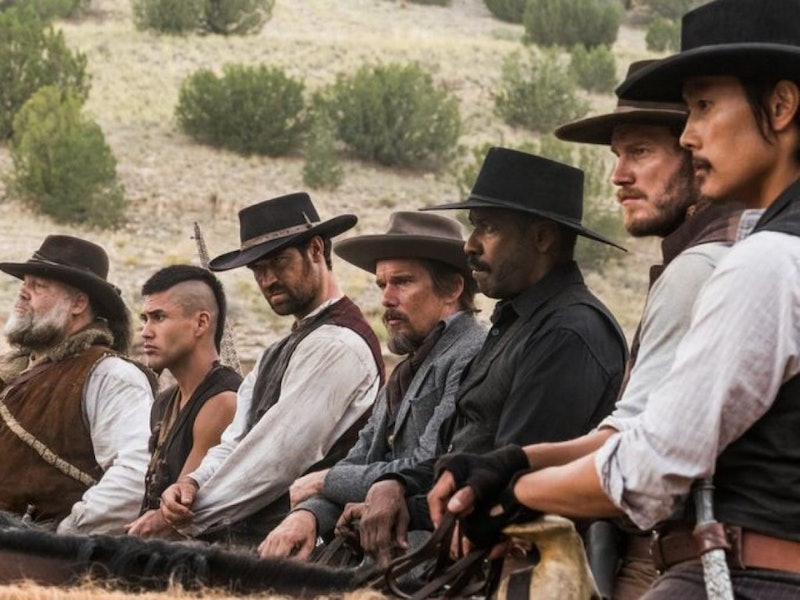 There's a lot of history behind Training Day director Antoine Fuqua's gunslingin' action-Western, due out Sep. 23. Starring Denzel Washington, Chris Pratt, and Ethan Hawke, The Magnificent Seven is a remake of not one but two movies. The 1960 film of the same name is a Western reimagining of The Seven Samurai, the 1954 film by legendary Japanese director Akira Kurosawa. Like both of its predecessors, the 2016 Magnificent Seven tells the story of a group of men who come together to defend a small town from villains promising to raid it. With a diverse cast of lone wolves and cowboys on the road to redemption plus stunning desert vistas and late composer James Horner's final score, this movie seems like the perfect transition from summer blockbusters to fall awards bait. Do you have to have seen the originals to enjoy The Magnificent Seven ?

It's been years since I've seen either the 1960 version or The Seven Samurai, and my hazy memory didn't mar my experience of this new movie in the slightest. The plot is easily adaptable because its core is simple and strong. There's no convolution in The Magnificent Seven. Its story is about as straightforward as it can be, and an unfamiliarity with the source material should not discourage anyone from going in cold. Of course, if you are a hardcore fan of either or both of the originals, you'll probably be tempted to make some comparisons.

Some of the major differences between these films are based in character and in the relationships between them. In this new Seven, the racial make-up of the crew is a definite factor. (Hawke plays a former Confederate soldier who has a friendship with Washington's black warrant officer, for example.) After a Venice Film Festival screening of the movie, Fuqua told The Hollywood Reporter that he focused on making sure the major themes of assistance and bravery in the movies that came before would still come across in this 21st century adaptation. He said:

I think Kurosawa’s Seven Samurai still resonates today, which is the story of tyranny and terrorism, whatever you want to call it. It’s the same thing, people taking advantage of other people. So we needed strong people to come and serve, which is what samurai means, "to serve." I think that makes it contemporary because that idea should never go away.

In another interview with The Hollywood Reporter, Fuqua expressed his approach to remaking a classic. (Two classics, in this case.) "My big lesson so far is that when you do that you have to respect the film's DNA and you have to respect certain elements of the film," he said, "because when you respect that, you're respecting the people that love the film." As a one of those people who grew up dazzled by the 1960 Magnificent Seven, the director knew what base elements he had to honor for his own younger self. "I kept reminding myself of when I was a 12‑year‑old boy, when I was a kid watching it with my grandmother, what was the feeling I had? How much fun was it? How cool were they?"

Though the film's director hopes that his movie shares the same "DNA" as the original The Magnificent Seven and The Seven Samurai, the 2016 version is intended to stand fully on its own.