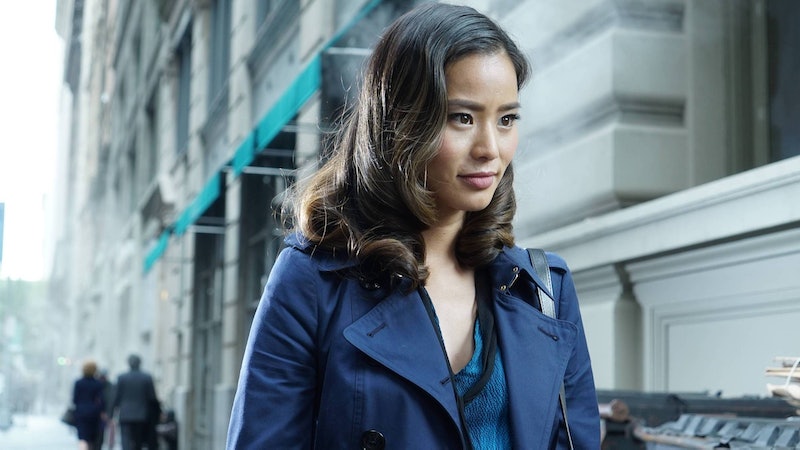 A new season of Gotham is beginning, and you know what that means, friends: More characters from the pages of DC Comics making the leap to the small screen. Season 2 of Gotham introduced the villain Hugo Strange, and saw the transformation of Edward Nygma into the Riddler. Now, Season 3 will be bringing a more true-to-the-comics version of Poison Ivy, among other new characters. So, who is Valerie Vale and how does she tie into the comic books?

Well, if the last name of Vale sounds familiar to you, you've probably heard of Vicki Vale, a DC Comics character who is a reporter in Gotham City and has been particularly tied to Batman. The character was also adapted to the big screen in Tim Burton's 1989 Batman, played by Kim Basinger, so if you've seen the movie you've definitely heard the name. Although Vicki doesn't have any superpowers — other than a keen journalistic sense, of course — many of her storylines from the comics deal with her attempting to prove that Bruce Wayne is Batman, even though the two are often romantically linked. However, Valerie isn't simply a version of Vicki Vale with a different first name — Valerie Vale is Vicki Vale's aunt, as reported by TVLine.

So what does that mean for her character on Gotham? Well, rather than being tied to Bruce Wayne in the show, it seems Valerie will be working with Jim Gordon, who fans might remember is no longer a member of the Gotham City police department, but is still working to track down the experiments from Hugo Strange's laboratories that were let loose at the end of Season 2. In fact, according to Jim Gordon actor Ben McKenzie in an interview with TVLine, the pair will team up when Valerie makes a proposition: She'll help Jim track down Fish Mooney if he'll take her along with him.

Additionally, Valerie is being set up as Jim's new love interest in Season 3. Of that particular relationship, McKenzie told TVLine:

Jim likes that she’s so aggressive, that she’s so unapologetic. She almost literally slaps him back into taking stock of his life, and that’s something that a guy in his position can appreciate.

So, it stands to reason that Valerie will be a pretty loose adaptation of Vicki's character on Gotham. Valerie will be a journalist just like her well-known niece, but rather than searching for the truth about Batman's identity, Valerie will be looking into the truth of Gotham — and all its now super-powered villains. Personally, I can't wait to see how her relationship with Jim unfolds and, more importantly, how she helps him track down Fish Mooney through the power of journalism.

More like this
Yes, Joseph Quinn Is Actually Playing The Guitar In This Epic 'Stranger Things' Scene
By Alyssa Lapid
At 14, Jenny Han Wrote Rom-Coms About Her Friends & Fan Mail To Leo DiCaprio
By Alyssa Lapid
Florence Pugh & Zoe Kazan Have Teamed Up For A Major New Netflix Series
By Rachel Mantock
'Stranger Things' Star David Harbour Has This Actor In Mind For A Hopper Spinoff
By Alyssa Lapid
Get Even More From Bustle — Sign Up For The Newsletter