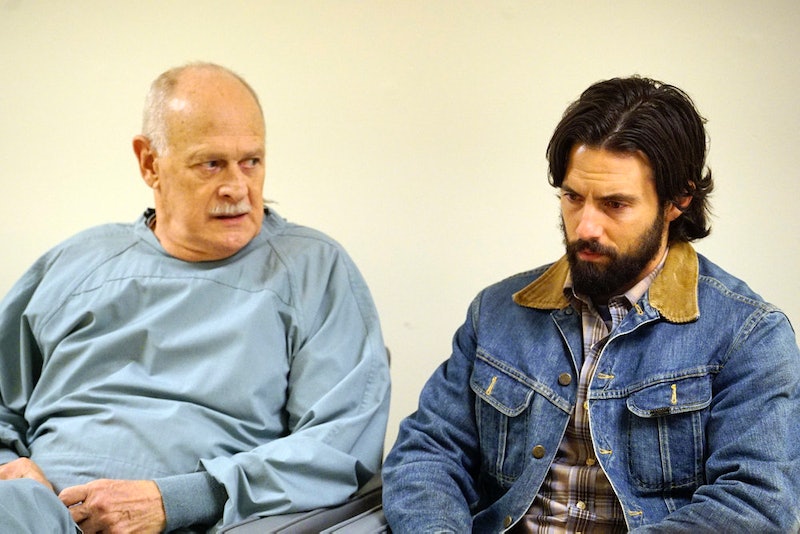 NBC’s newest show, This Is Us, has been billed as the next family drama to make you cry your eyes out, a la Parenthood or even Friday Night Lights. While I do love a good tearjerker, I’m mostly in it for Jack (Milo Ventimiglia) and Rebecca (Mandy Moore), who comprise just one of the storylines in the interwoven narrative of the show. Like many stories that jump between disconnected characters, This Is Us has a big twist that is revealed at the very end of the pilot, which premiered on Tuesday, Sept. 10. Spoilers ahead for the pilot of This Is Us.

This Is Us was created by Dan Fogelman, and since he is the writer/director/producer behind Crazy, Stupid, Love, you should've known to look out for a twist of some kind. The NBC series follows Jack and Rebecca as she goes into labor with triplets; Kate (Chrissy Metz) and Kevin (Justin Hartley), a twin sister and brother struggling for different reasons and finding support in each other; and Randall (Sterling K. Brown), a man who just found the birth father that abandoned him at a fire station shortly after he was born.

As you watch the pilot, you think that all of these stories are separate and happening at the same time, but that’s the twist — you’re wrong! We were all wrong! It turns out that Rebecca and Jack are the parents of Kate, Kevin, and Randall, meaning that the couple's storyline is happening a few decades in the past (which is revealed in a very clever hospital scene). It turns out that one of Jack and Rebecca's triplets died at birth, and they adopted Randall as soon as they found out that he had been abandoned. The Big Three, as Rebecca and Jack called their children, were all brought home and raised by the loving pair.

I like the way the show is playing with different timelines and it will be interesting to see how the actions of Jack and Rebecca shape their kids, since we already have an idea of what they're like as adults. The three siblings mention their parents a few times in the pilot, and I can't wait to see how the timelines intersect over the course of the series.

I also want to see how the three siblings — Randall, Kate, and Kevin — get along and interact, because the pilot only showed Kate and Kevin's relationship. We know that they're all in each other's lives, as Randall's daughter has a poster of Kevin's TV show show on her wall that says it's from "Uncle Kevin," so seeing this big family come together and reflect on Jack and Rebecca's impact should make for a sweet moment. So far, This Is Us is shaping up to be like Lost and Parenthood put together, and I can't wait to see where both timelines go next.