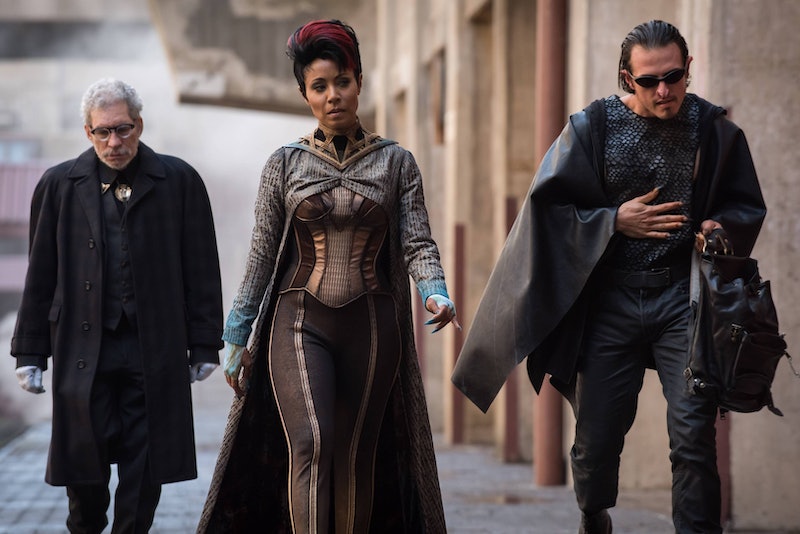 At the end of Gotham Season 2, it seemed like Hugo Strange's Indian Hill experiments all escaped and went their separate ways. But as the Gotham Season 3 premiere reveals, no one is allowed to know the truth about what happened and the "experiments" were even willing to let Ivy Pepper die to protect their secrets — if she's actually dead, that is. When Selina's young friend tracked them down at their hideout and threatened to expose their secret location, a few of Fish's henchman chased Ivy onto a high ledge, then laughed as she seemingly fell to her death. Selina was devastated, and might already regret teaming up with these supervillains. But Fish Mooney and her gang's secret plan is less about world domination and more about survival. After being experimented on, and, in Fish's case, brought back from the dead, using their powers weakens and even hurts them because their DNA is rejecting the mutation. And they're not going to let anything threaten their chance to keep their powers, which is why they're going after Hugo Strange to fix them.

That was something of a theme this episode, as different factions all became determined to get what they want, no matter the cost. Bruce is trying to find out who betrayed him, and Jim Gordon is acting as a bounty hunter, bringing the mutated villains to the police rather than rejoining the force, since he's still broken up over Lee Tompkins leaving him and finding happiness with a new man. Lucius Fox seems to be the new Nygma, since he's popping up to drop scientific jargon about what the "creatures" want and explain that they need an immune system-suppressing drug. Valerie Vale, a new reporter, is particularly insistent about uncovering the truth behind Fish's gang's quest.

Ivy appeared to be a casualty of that quest — since she fell pretty far into that open pipe — but characters don't usually stay dead for long on Gotham. It's far more likely that she'll wind up reappearing, possibly with new powers at her disposal to aid in her revenge. And it looks like the series has more plans for the character, since a few months ago TVLine reported that Clare Foley, who has played Ivy since the pilot, is being replaced by an older actor for Season 3. More recently, TV Guide's TV Insider confirmed that Maggie Geha will take over the role, and you can get a glimpse of this older Ivy in the photo below.

Executive producer John Stephens told TV Insider that this rapid aging will come at the hands of an Indian Hill escapee, so whenever Ivy recovers from her fall, I have a feeling she'll want revenge on Fish Mooney's gang. Gotham has only been back for one episode and already Fish and the other mutated villains are wreaking havoc on the city.