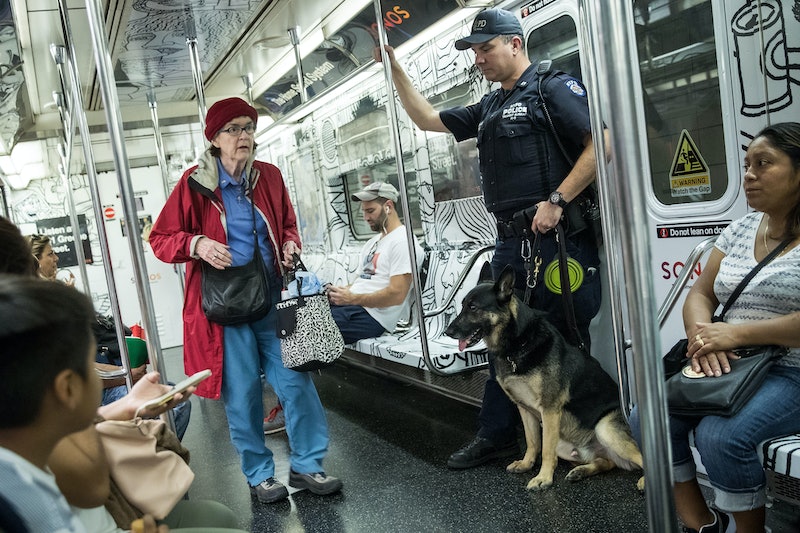 When I heard about the explosion that took place a few blocks from my office in New York City late Saturday night, I had just gotten back to where I was staying after a party in a beach town in Maine. I was visiting my partner's relatives, and we'd been dancing all night with a bunch of middle-aged lesbians at a 30th-anniversary party. I hadn't had as much fun in weeks as I did that night, walking through the tree-lined streets by their house in total darkness. "What if a bear attacks us?" my friend joked as we used our iPhones as flashlights. "'Two Vegans Mauled By Bears.' The internet would love that headline," I replied. Having worked five years now as a web editor, it is my immediate reflex to turn any potential tragedy into an irresistible click.

But when I heard the news of the explosion in Chelsea late that night, I reacted with two immediate emotions: dread and fear. Dread over what impact the event would have on my commute and on the culture in New York City, and fear that it is inevitable for New York City to once again become an epicenter for terror. When I woke up in the New England countryside on Sunday morning, to the sound of actual birds chirping, and saw that a second, undetonated bomb had been found on the same block as my office, I felt a third emotion: anger. Anger that I might be in more danger in my final months here before I make the move to California in November, and anger that I would have to return to the city to begin with, even if only for a few more weeks.

Because the truth was, I felt safer on that pitch-black street than I do in New York City these days, which is just one of the many reasons that after a decade here, my partner and I have decided to move home to California. One of the many ways I knew it was right to do this is that I feel relieved almost any time I leave New York City these days. Relieved to breathe fresh air, relieved not to commute on a packed train where there seems to be nothing but sad faces every morning, relieved to be somewhere I don't have to be on guard while simply walking to the grocery store. Relieved not to have to pretend to be tougher than I actually am.

After September 11th, a tragedy I was not here for, New Yorkers were praised for their ability to "get right back to work" and restore normalcy. The trains were up and running, and the best defense in the face of terrorism, they continue to tell us, is to not let yourself be intimidated by it. On Sunday, both the New York City mayor and the governor's office reported that West 27th street, where Bustle's offices are, was open and safe, and that all New Yorkers should return to work and that all businesses should remain open. "Whatever the cause, whatever the intentions here, New Yorkers will not be intimidated," New York City Mayor Bill de Blasio said. These words echo the "fear lets the terrorists win" rhetoric that abounded after September 11th, or more recently, President Obama's comments after the Paris attacks. “We do not succumb to fear,” he said. "The most powerful tool we have to fight ISIL is to say that we’re not afraid, to not elevate them, to somehow buy into their fantasy that they’re doing something important."

If that sounds familiar, President Obama himself has acknowledged that his language following each mass shooting or terrorist attack has become predictable. "Somehow this has become routine. The reporting has become routine. My response here, from this podium, has become routine," Obama said last October, following the shooting at an Oregon community college. Most of us probably don't even remember which one that was; they all begin to blend together, rapidly normalized, reported, and repeated, along with lines about how we can't let fear govern our lives.

I understand why politicians and office managers alike want to keep the city running as if everything is normal this Monday. After all, there were no deaths in this explosion, and if everyone went into panic mode, the city's economy would be negatively impacted. But after five years spent writing horrific headlines, finally having a story hit close enough to home — on my very office block — to make me feel actual fear has made me question whether a "return to normalcy" is really the most patriotic or appropriate response to terror. When a third undetonated IED was found in New Jersey on Sunday, I sent an email to my supervisor: I would not be coming into the office because I was afraid. I think of myself as a relatively tough and cynical New Yorker, and I was as surprised as anyone by just how shaken I felt.

Perhaps it's time we questioned whether failing to acknowledge the fear that terrorism and violence brings actually creates more fear and violence in the long term. When violence becomes the new normal, perhaps a return to normalcy the day after an attack is not actually the only "patriotic" or brave answer.

My surprisingly strong reaction to the events this weekend makes me reflect on my first year working as an editor in New York City, five years ago. My first day managing the homepage at The Daily Beast coincided with the Sikh temple shooting, which was quickly followed by Aurora, and then a mass shooting nearly every week after that. Like clockwork that entire year, there seemed to be some sort of shooting or act of mass terror every Friday (it was always a Friday, for some reason). I quickly learned to numb myself to the horror, to gather facts as quickly as possible, to recycle tweets and statements, to assign follow-ups. Eventually, by the time the Sandy Hook Elementary School Shooting happened, I had ceased to feel much of anything. Usually, my main emotional response was a cynical sense of the inevitability of such attacks, a guilty amazement that it doesn't happen every day. We'd write the stories, rinse, and repeat. The attacks became normal, and when it wasn't a shooting, it was a terrorist attack, usually in Europe, that became the new standard news-makers.

In 2014, I observed my developing cynicism and transitioned from covering breaking news to features, which allowed me to maintain distance from some of the more gruesome details of these events — details that I'd become inured to — and instead focus on the larger stories they told or questions they raised. Transitioning out of that cycle is part of what allowed me to gain some of my humanity back, to feel things again when horrible news broke. It is also part of what allowed me to feel my own emotions enough to know it's time to leave this city, to sense that things may be about to become much scarier, as they have in Europe. No place is immune to violence, but at least I can choose not to live in a city that, more and more, makes me feel afraid and exhausted.

Much has been made about New Yorkers' predictably unruffled response to these attacks, and the sense that in order to be a "True New Yorker" you need to act as though these kinds of events don't bother you. New Yorkers aren't supposed to scare so easily; we're supposed to be tougher than that. But perhaps it's time we questioned whether failing to acknowledge the fear that terrorism and violence brings actually creates more fear and violence in the long term. When violence becomes the new normal, perhaps a return to normalcy the day after an attack is not actually the only "patriotic" or brave answer.

Perhaps taking a day to take care of yourself, to tell your loved ones you're safe, and to reflect on what you can do to make your city and life less fear-based should be considered a valid, strong option — not a weak and cowering response. Because when terror strikes, some of us feel triggered, terrorized, scared. And we should have the right and space for that. We should be allowed to own that feeling, and in my opinion, commerce and "business as usual" should be affected. Terror should not be allowed to become the new normal, and we shouldn't have to pretend that everything is OK when everything from our election to our Facebook news feed shows it clearly is not.

So I'll admit it: I am oddly weepy, on edge, and afraid today, in the face of even the most small-scale terror. There shouldn't have to be deaths to know that what happened this weekend may very well usher in a new era of fear and small-scale copycat terrorism and/or a police state in New York City. I hope I am wrong, but my instincts and experience make me fear otherwise. But that's not all I'm afraid of. I am also afraid of leaving New York amid a sea of even more police harassing people of color and suspicious train delays. I am afraid that the city I have loved for a decade will continue down the road of more and more income inequality, unaffordable housing, overcrowding, xenophobia, and normalized societal depression. I fear we'll all be so busy acting tough that we will forget to feel, forget to process our fear and our grief.

Not getting on the train on Monday was an act of self-care, and it took more bravery than it should have. Logically, I knew that nothing would likely happen if I went into the office, but I didn't need to spend over an hour underground each way, claustrophobic and wondering. I refuse to let this be my life's new normal, and I own my fear today, because suppressing our emotions is what breeds violence in the first place.

More like this
The Most Powerful Photos From The Weekend’s Abortion Rights Protests
By Melanie Mignucci
5 Ways To Stand In Solidarity With Women In America From The UK
By Sophie McEvoy
How To Fight For Reproductive Rights, Based On How Much Time You Have
By Courtney Young
For These Abortion Clinic Volunteers, Going TikTok Viral Is A Risk Worth Taking
By Audra Heinrichs
Get Even More From Bustle — Sign Up For The Newsletter