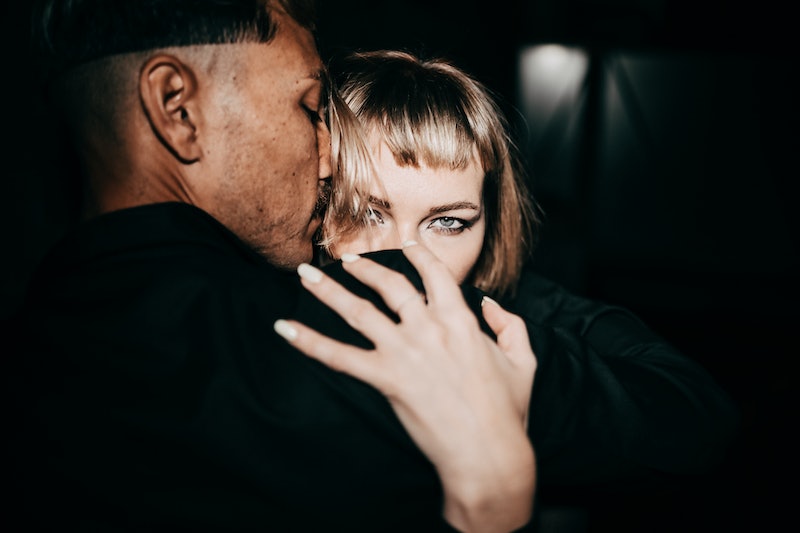 We're becoming more aware of emotional abuse as a culture, but the concepts of it in popular media tend to be pretty extreme: gas lighting, denial of access to funds or children, aggressive verbal abuse, and other overt examples of subjugation and manipulation. As a survivor of a severely emotionally abusive relationship, I can tell you that these are rarely universal, and in that in many damaging situations they may not even be present. An emotionally abusive relationship is one in which a partner "undercuts a person’s foundational self-confidence and love of self and replaces them with confusion about self-worth, value, justice, mercy, and love," according to an excellent definition by Psychology Today. The arsenal through which a romantic partner can do this is, unfortunately, a vast one, from outright insults to infantilization, passive aggression, withholding, and subtle isolation. It can be, from the outside, completely invisible, which is one of its most powerful traits.

Recognizing the signs of emotional abuse isn't necessarily the first clear step towards exiting an emotionally abusive situation. Even though I was pretty clear, through secret research, that my partner was a narcissist who was treating me appallingly, his control and the damage to my self-esteem were so extensive that the discovery was not sufficient to help me leave. (It was luck, in the end, that extricated me.)

So don't email this list to a friend whose relationship strikes you as alarming and expect them to immediately storm out the door. It can help, but more support is necessary to help a friend leave an emotionally abusive situation than just providing the information. And if you detect these signals in your own relationship, reach out for help immediately, from understanding friends, family, a therapist, or a counseling network.

1. They React To Your Dreams With Contempt

A little bit of disagreement between partners about future life plans is acceptable; if you want to throw in your well-paying job and run off to become a freelance comic book artist, it's reasonable that a partner might have some concerns. But the distinguishing factor of an emotionally abusive partner is the form in which a lack of support manifests itself.

Psychotherapist Abby Rodman, writing for the Huffington Post, explains that "snorts and snide remarks" in response to your ideas about your career or future should be an immediate warning sign. If they react to your dreams with contempt rather than kind consideration, it's abuse. Opposition because the idea would place you outside their realm of control (i.e. traveling a lot, not contactable) is also a notable red flag. It also may not be constant; some emotionally abusive partners will actively celebrate some of your decisions, for reasons to do with ego and the "pedestal" (which I'll discuss shortly).

2. They Withhold Affection Or Attention

While many of us associate emotional abuse with overt treatment, the lack of a response can be indicative of abuse too. Enforced silence — what the therapy organziation Talkspace calls "withholding" — can be a seriously emotionally abusive tactic designed to punish you for transgressions. If partners refuse to respond, won't talk to you for days, and won't give you affection or attention, even if you respond by frantic attempts to regain their love, they're prime candidates for abuse. This treatment may not even be in response to some kind of crime on your part; it may simply happen for no apparent reason, pushing you into overdrive to find out "what's wrong" and turn your life upside down searching for how to make them happy.

3. They Are Perpetual Victims

Dr. Steven Stosny, at Psychology Today, gives an interesting insight into the psychology of the emotional abuser, one that provides a more subtle sign of abuse. Abusers, he points out, are often deeply anxious individuals with deep feelings of inadequacy who view others as likely to confirm their fears, and so they're prone to making themselves the victims in situations. This will manifest in a relationship in patterns of blame: whatever goes wrong, it'll likely be your fault, even if it wasn't.

4. They Openly Minimize Your Wants & Needs

The Counseling Directory explains that one of the more subtle techniques of emotional abuse is the practice of "minimization." They don't just mean being made to feel small, though that's definitely part of it. Minimization, in psychological terms, is the downplaying of something, rendering it insignificant, and in an emotionally abusive relationship the minimized material will always be yours: your emotions, feelings, problems and views. The emotional abuser makes their partner feel as if they're exaggerating their concerns, looking for attention, incapable of solving obvious problems, or just making stuff up. Even if the minimization looks benevolent ("don't worry your little head about such a small thing!", "you're fussing over nothing, I'll do it all for you!"), it isn't.

5. They Hold You To Standards You Can't Possibly Achieve

We associate emotional abuse with tearing down, but there can be aspects that relate to building you up. Certain kinds of emotional abuse center on expectation: the abusive partner puts his/her other half on a pedestal, full of unrealistically high expectations, and then shows continual disappointment and punishment when they inevitably disappoint him/her. Out Of The Fog connects this particular trait to perfectionism, calling it "the maladaptive practice of holding oneself or others to an unrealistic, unattainable or unsustainable standard of organization, order, or accomplishment in one particular area of living," and it can stretch to anything: they want constant high standards in your career, how clean you keep the house, how you look, or something else. And when you inevitably slip up, they lash out.

6. They Humilate You In Front Of Others — And Tell You You're Oversensitive If You Get Upset

Partners are allowed to be funny, but making cruel jokes or playing ridiculous games in the presence of your friends or family takes things a step further. Even if they're meant to be charming or harmless ribbing, it's worth taking note of signals that they demonstrate broader contempt rather than light humor. The Office Of Women's Health notes that if you feel humiliated or ashamed by their behavior and they keep doing it, it's a fairly classic signal that they lack respect for your boundaries and personal feelings, and will likely respond to your complaints with minimizing tactics.

7. You Arrange Your Decisions Around Not Upsetting Them

We can be superficially sure that our partners provide security and love, and yet unconsciously acting around the possibility of their abuse. This tends to be called "walking on eggshells," and generally refers to the tendency for "the victim of emotional abuse [to judge] everything according to how the abuser will react to it", according to Everyday Health. If you fear compromise or asserting your will, or prepare for it in the knowledge that it will be difficult and likely involve some hurt, it's not likely that the situation is a safe or supportive one.

If you feel like you need help getting out of this relationship or figuring out what to do next, call the National Domestic Violence Hotline at 1−800−799−7233. You're not alone.