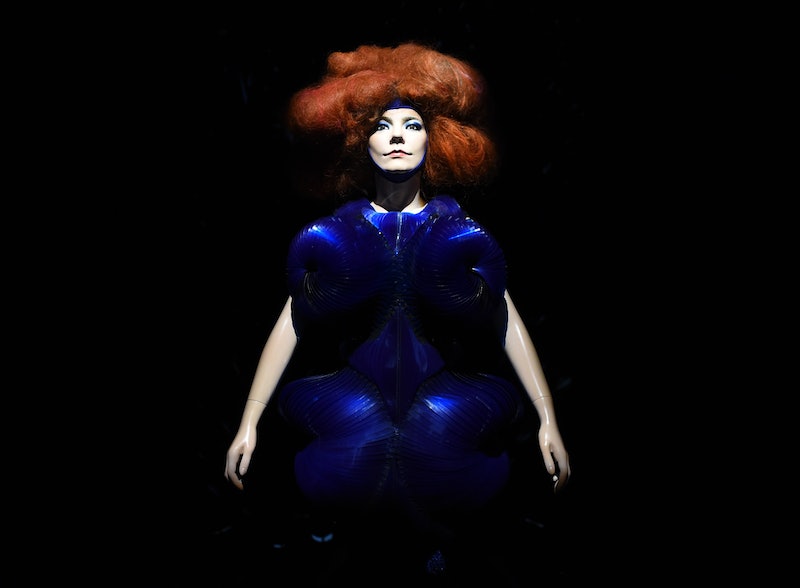 I am very, very lucky to know some spectacular artists who are female. One just won the Forward Prize, another is putting on a performance piece to break open rape culture, and yes, I will brag about them from here to oblivion, because they are awesome. But the reality of supporting woman-made art is more nuanced than just following the talent. Every time you buy a book by a woman, a painting, a ticket to a show, an LP, a piece from a gallery opening, a zine, you're participating in an extremely long discourse about women's artistic talent, biology, and the quest for artistic greatness. And if you believe in good art, there are a lot of very good reasons to celebrate the sh*t out of the excellent stuff currently and historically made by women.

Should we be focusing on the gender of artists? Shouldn't it just be all about the aaaaht, darling? This question tends to crop up in a lot of discussions of feminism and women generally, but the answer is the same for artists as it is for CEOs, sportspeople, and politicians: while one day equality will create the conditions that let us put gender out of the picture, it's still a factor, deeply structurally embedded in our society, and one that tends to leave women behind. For that reason, looking at art through the lens of the gender of its creator matters, particularly because there's been a lot of historical nonsense about whether women are "able" to make good art, or if their hands are just too weak to hold brushes properly. (No, seriously.)

Here's why you should consider spending your spare dollars on some woman-made art today!

Narratives of female artistic talent have, throughout Western history, been dogged by allegations that we're just somehow innately less talented, that our brains and bodies just don't make us that way. Even though Roman writer Pliny the Elder mentioned the legend of the first representation of the human form as being done by a woman (a girl called Kora who traced a silhouette on a cave wall), her drawing was secondary to another achievement: her father Butades allegedly modelled the silhouette in clay, the first ever sculpture. And that's not even scraping the surface. Aristotle himself declared that creativity was innately male, and that women, possessing "deformed" or inferior bodies to men, simply weren't capable of making art.

It's a view that's held sway for a surprisingly long time, and never moved far from its origins in Aristotle's perception of women as weaker, or just somehow "different." Condemnations of women's artistic talent have been paternalistic as hell: in the 1700s arguments raged about whether female anatomy prevented effective artistic technique because of their slender fingers and untuned brains. Societal ideas about women's capabilities fed into their perceptions of the worth of female art, if they were even able to create it.

It Fights The "No Great Women Artists" Problem

Sexist art historians, cultural commentators, and average everyday schmoes have been known to condemn women's artistic talent with one damning sentence: "Well, why are there so few awesome female artists in history?" The answer, as anybody with half a brain will tell you, isn't to do with female incapability or lack of artistic feeling. It's embedded in cultural ideas of female roles, power, time, access to resources, and thinking. As feminist art historian Linda Nochlin wrote in the definitive last word on the subject, "Why Have There Been No Great Women Artists?," "things as they are and as they have been, in the arts as in a hundred other areas, are stultifying, oppressive, and discouraging to all those, women among them, who did not have the good fortune to be born white, preferably middle class and, above all, male. The fault lies not in our stars, our hormones, our menstrual cycles, or our empty internal spaces, but in our institutions and our education- education understood to include everything that happens to us from the moment we enter this world of meaningful symbols, signs, and signals."

The dearth of female artists who've achieved the big time, in sales, reputation, academic attention or general acclaim, isn't down to innate incapability or divergence of talent (or, as modern German artist Georg Baselitz would have it, the idea that "women don't paint very well"). It's been a progressive, structural issue. Giving money to good female-made art gives it legitimacy, and creates the basis for structures to change.

It Chips Away At Sexism In The Art World

There's been some pushback against the international art world's latest tendency to create female-focused exhibition spaces, gallery exhibits and solo shows; but, rather than creating an unnecessary gender focus, proponents argue that they're actually "curatorial correctives," as the head of the Sackler Center for Feminist Art told the New York Times. Barbara Kruger, one of the most prominent modern female artists, referred to it as "playing catch-up after centuries of women’s marginality and invisibility." And this reflects something big about the art world in general: it's not just that women historically haven't been allowed to make art, it's that the people in charge of promoting, showing and selling that art are often not interested in women's productions.

This isn't a little problem. The National Museum Of Women In The Arts has a few radical statistics that are actually pretty upsetting: despite women earning 50 percent of all MFAs in the US, only 25 percent of solo gallery shows in NYC, one of the hotbeds of the art world, focus on female artists, and women only have 24 percent of prominent art director positions.

As Ben Davis theorises on ArtNet, the art world, while it appears superficially extremely liberal, is actually dictated by interests that are overwhelmingly male. "The commercial art industry [is] about servicing the appetites of the wealthy. Given the not-at-all equal distribution of wealth in society, this reality ultimately meant that it was about servicing the appetites of men.... when you examined how artists achieved gallery representation, [it is] through relatively invisible personal networks... a 'boy’s club.'" Davis also notes that cultural expectations of women mean that female artists often promote themselves less aggressively, and that results in less representation and less overall exposure. These imbalances create a genuine problem: lower prices for female artists, even the top ones, less recognition, less likelihood of entering "the canon" or winning prestigious prizes, and all the other markers that determine art-world success. Greatness isn't just in the work; it's made.

It Legitimizes The Female Perspective

The habitual dismissing of the "feminine perspective" as innately domestic, small-scale, and personal rather than political (if that divide is even real) has been persistent for centuries. Real art from women suffers from the debilitating condition of being created by a woman, and is therefore often seen not only as less "good" but less worthy of serious attention. This problem spreads across the art world, into different genres and media; we're all now familiar with the publishing world sting that submitted the same manuscript under female and male names, and received a far more interested response to the male one.

How women look at the world matters. It's always mattered, from the times when our perceptions were forcefully limited to the sphere of family and domesticity to the modern age, where our possibilities are significantly expanded. Women haven't just become worth listening to because we've established some control over our existences; we've just become more capable of seizing the megaphone. (Anybody who thinks highly societally circumscribed women can't make great art needs to read some Emily Dickinson and sit down.) If anything, that past cloistering gives the necessity to patronize female art more urgency. Go see a female punk show; buy the new female poet's prize-winning novel; nab a print, a canvas, a piece of sculpture, that was produced through female ingenuity and genius.

Don't know how to get started? Check out the Woman Made gallery, a female-oriented museum near you, Etsy for artisanal products, and Pajiba's 52 Films By Women series to give you some ideas.