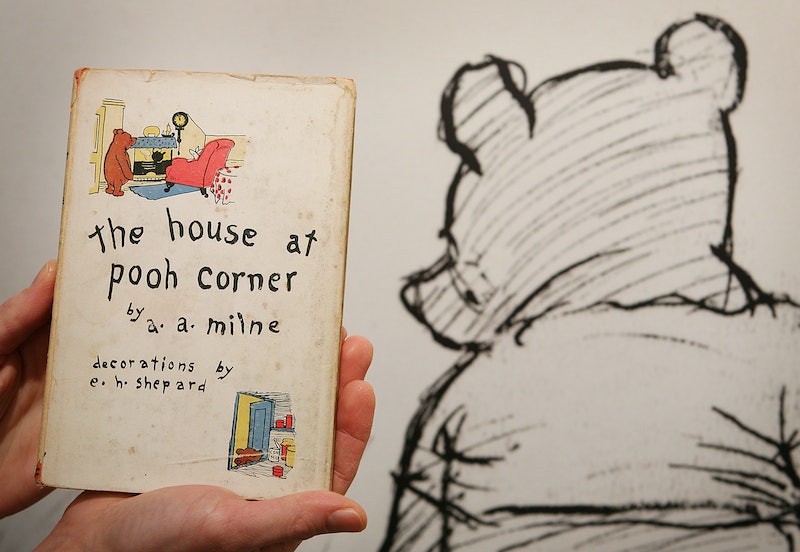 The Hundred Acre Wood has been home to a very eclectic collection of animal friends since Winnie-the-Pooh first debuted in 1926, including a tiger and a pair of kangaroos — and now you can add penguin to the list. That's right, Winnie-the-Pooh has a new penguin friend. Because now that the bear of very little brain is turning ninety, it was time for a new anima to join to lovable cast of characters.

Winnie-the-Pooh was created by A. A. Milne, and the characters — including Pooh himself — were inspired by the toys of Milne's son, Christopher Robin Milne. Hence the strange collection of species found in the books. So where did the penguin come from? Well it turns out that Christopher Robin did have a stuffed penguin. And after one of the authors currently working on more Winnie-the Pooh stories, Brian Sibley, saw a copy of it, he was inspired to create a new friend for everyone's favorite bear.

"The thought of Pooh encountering a penguin seemed no more outlandish than his meeting a kangaroo and a tiger in a Sussex wood," Sibley said in a press release, "so I started thinking about what might have happened if, on a rather snowy day, Penguin had found his way to Pooh Corner.”

The origins of the penguin in the photo are unclear, but it was likely bought by Christopher Robin's mother, Daphne, from the department store Harrod's. We don't know what the Milnes might have called the toy — but since many of the animals in the Hundred Acre Wood are simply named for their species, the character is called simply Penguin.

The new story collection is entitled The Best Bear in All the World, and will feature stories from Brian Sibley, Paul Bright, Kate Saunders, and Jeanne Willis. It is the first authorized sequel since A. A. Milne published House on Pooh Corner in 1928.

“The humorous stories in Winnie-the-Pooh and The House at Pooh Corner have captivated generations of children and adults alike, with their skillful characterisation, exquisite use of language, enchanted forest setting, and E.H. Shepard’s charming illustrations," said Nicole Pearson, publisher with Children's Books at Egmont Publishing, in a press release. "It has been an absolute pleasure to work with these four talented authors who have shown such great affection for Milne’s work and drawn from their memories of the world he invented in order to create the new stories in The Best Bear in All the World, celebrating 90 years since Winnie-the-Pooh was first published.”

The book will be released on October 6.

So welcome, Penguin, to the Hundred Acre Wood!