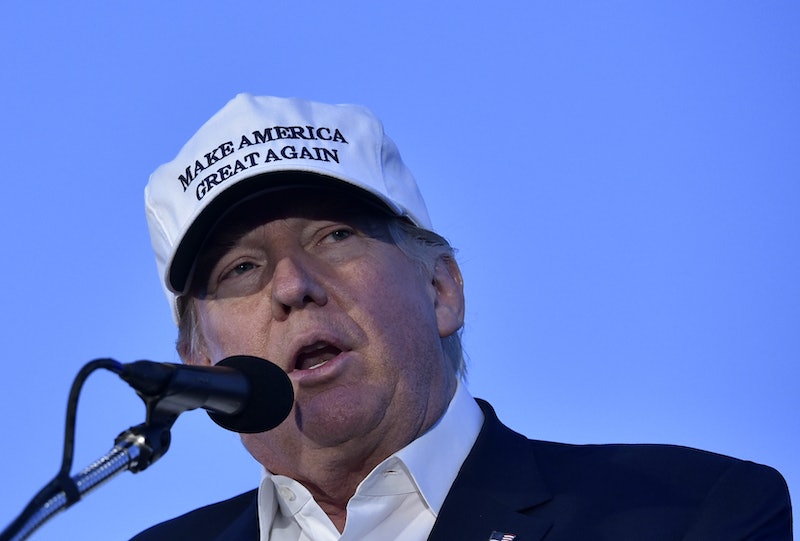 During his presidential campaign, Donald Trump has had quite a few things to say about the media. Whether he and his campaign are blacklisting journalists from covering his events because he thinks they're unfair to him, biased against him, or taking what he says out of context and exaggerating it, Trump has made it clear that he doesn't trust the majority of news outlets. However, Trump took things to a new level Monday when he went on Fox & Friends to defend a statement he made after an explosion in Manhattan on Saturday. Trump had quickly tweeted that it was a bombing.

At the time, news outlets were hesitant to call the explosion a bombing, considering how not much information had been released so far. So some criticized Trump for jumping to call it a bombing before it was confirmed. After it was confirmed that the explosion was indeed a bomb, Trump took to Fox & Friends to do a disturbing self-congratulation on being right first. He said, "I heard — I didn't see it — but I heard I was criticized for calling it correctly. But what I said was exactly correct. I should be a newscaster, because I call it before the news."

Let's unpack this notion for a minute. By saying that he called it before the news, Trump is asserting that being first is the most important thing about reporting. Regardless of the fact that he ended up being correct about the bomb, he had no actual proof at the time of his claim. Is Trump saying that newscasters should start making assumptions before they hear the facts of an event? Unfortunately, journalists don't predict the news; they report it.

Of course, sometimes someone can be right about something before the official confirmation, but that doesn't mean they should present the information as fact just because they feel that it's right. That's a dangerous road to go down, and our media would be a complete disaster if it followed that thinking.

It's irresponsible for journalists to report hearsay or opinions as fact, and most know this and take it to heart when they do their jobs. Journalists — including newscasters, like Trump apparently wants to be — have an ethical responsibility to present to the American people what they can prove as facts, not say what they think is true and then gloat afterward that they were right. Trump's complete misunderstanding of the media and how journalism is supposed to work (as a watchdog for politics, hence the nickname of the Fourth Estate) is very scary, considering he is running for president.