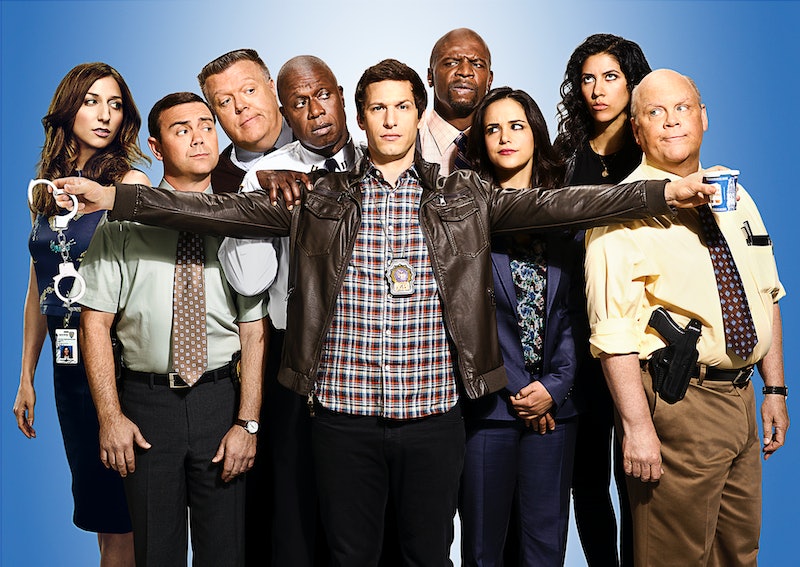 The Fall television season has officially begun! While I am in the process of making a schedule for all the TV premieres that I need to watch, there's one important aspect of this time of year that we can't forget: Last season recaps. Listen, the summer was long and full of terrors and I won't blame you if you can't exactly remember where every single show left off. That's where I come in for the assist. So, I've put together a recap of Brooklyn Nine-Nine Season 3 for any fans who may be confused as to why Holt and Jake are in Florida when Season 4 kicks off.

For the most part, Season 3 of Brooklyn Nine-Nine was filled with entertaining and hilarious antics that have no real impact on the overarching plot of the series (but were still fun to watch, of course). However, there are a couple things fans should refresh themselves on before heading into the Season 4 premiere. There's a major relationship that finally — finally — happened in Season 3, not to mention that whole undercover mission the Nine-Nine took on in the last few episodes. So, if you're feeling even the slightest bit confused about where everyone stood at the end of Season 3, here's your Brooklyn Nine-Nine refresher.

The big relationship development that came out of Brooklyn Nine-Nine Season 3 is, of course, Jake and Amy finally got together! Cut to me cheering while jumping up and down, still. OK, here's a brief rundown of these two: At the beginning of the season, Jake and Amy confronted the feelings they revealed for each other at the end of Season 2. While they began exploring their relationship, they kept it secret from the rest of the precinct (which meant plenty of almost-getting-caught hijinks), but they eventually decided to tell their friends — Charles was overwhelmed with joy.

Later on in the season, the pair went on a cruise that turned out to be more work than vacation, but they did admit that they love each other. The couple was pretty solid for the rest of Season 3, even offering to housesit for Holt so that their captain could visit his husband in France. But, although Jake and Amy made plans to move in together in the Season 3 finale, their step forward was hindered by the big case their precinct handled in the last few episodes. Which brings me to...

The Return of Adrian Pimento

Now, viewers hadn't met Adrian Pimento prior to Season 3, but he returned to the precinct after 12 years spent undercover with a mobster named Jimmy "The Butcher" Figgis. Although it seemed like Pimento was simply going to be a fun guest star for a few episodes, he formed a relationship with Rosa Diaz, and it was pretty adorable — in its own way. Plus, Pimento's case concerning Figgis became a much bigger deal once the Nine-Nine realized the mob boss was trying to kill the recently returned detective.

As a result, the final episodes of Brooklyn Nine-Nine Season 3 largely focused on the squad investigating Figgis' operation (which included Amy going undercover in a Texas prison) and trying to find the mob's mole within the FBI. They do, of course, after breaking into FBI headquarters — but the mole turned out to be Holt's old friend Bob Annderson. Although the Nine-Nine manage to get the evidence they needed to take down Figgis' operation from Bob, the mob boss himself avoided capture. The Season 3 finale concluded with Holt and Jake living in Florida, seemingly under Witness Protection to avoid being found and killed by Figgis.

So, the end of Brooklyn Nine-Nine Season 3 was a bit of a wild ride, but Season 4 may be even crazier with Holt and Jake still in Florida while the rest of the Nine-Nine is back in Brooklyn. Now that you're all refreshed, bring on Season 4!

More like this
Everything You Need To Remember Before Westworld Season 4
By Brad Witter
What’s New On Netflix: Lana Condor’s Ghostly Comedy & A Sexy Reality Series
By Arya Roshanian
Yes, Joseph Quinn Is Actually Playing The Guitar In This Epic 'Stranger Things' Scene
By Alyssa Lapid
Vecna Officially Has A Fan In 'Stranger Things' Star Jamie Campbell Bower
By Alyssa Lapid
Get Even More From Bustle — Sign Up For The Newsletter