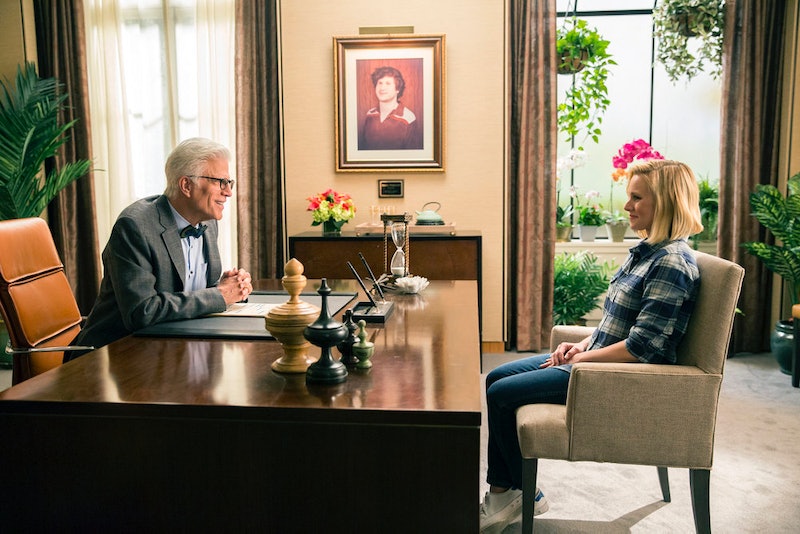 Imagine a world where cutesy neighborhood shops provide your every need free of charge, your soulmate is introduced to you immediately upon arrival, and there's never any shortage of frozen yogurt. If that sounds like heaven to you, well, you're kind of right, and kind of wrong. That's the world of NBC's new comedy The Good Place, but there's a reason why the show is called The Good Place and not Hanging Out In Heaven. That's because The Good Place doesn't take place in heaven, as the pilot revealed, and even though the place seems pretty perfect at first, it has some flaws.

When Eleanor (Kristen Bell) arrives in the Good Place after a particularly unfortunate incident with an erectile dysfunction billboard truck, she asks architect Michael what's up — is she actually in heaven? According to Michael, the Good Place isn't exactly heaven, at least not as its been interpreted by different religions. Instead, Michael explains, each religion was about five percent right about what the Good Place would consist of — except for one stoner dude in the '70s, who was 92 percent right about everything. Now, Eleanor is destined to live her life out in her personalized clown cottage, with her newly discovered soulmate. The after life should be sweet — except Eleanor definitely didn't earn her place in this version of heaven.

Though it's not technically heaven, the Good Place is filled with good people. That's especially obvious to Eleanor, who, upon arrival in the Good Place, immediately realizes that she shouldn't be there because she's not one of them. She got slated into the Good Place when she was mistaken for a pro bono lawyer who helped get innocent inmates off of death row. That wasn't Eleanor's life. Instead, she sold fake vitamins (actually chalk) to the elderly. Eleanor was a pretty crappy person (even though she insists she's a "medium person"), but being a little bit better apparently wouldn't have earned her a spot in the Good Place. According to Michael, only the cream of the crop gets a slot in the Good Place — everyone else, from the average to the awful, gets sent to the terrible, torturous Bad Place.

That's the biggest difference between the rules of Good Place presented by the show and many religions' ideas about heaven — the Good Place seems more discriminatory. Eleanor certainly doesn't belong, and the series premiere made me wonder if anyone really would.