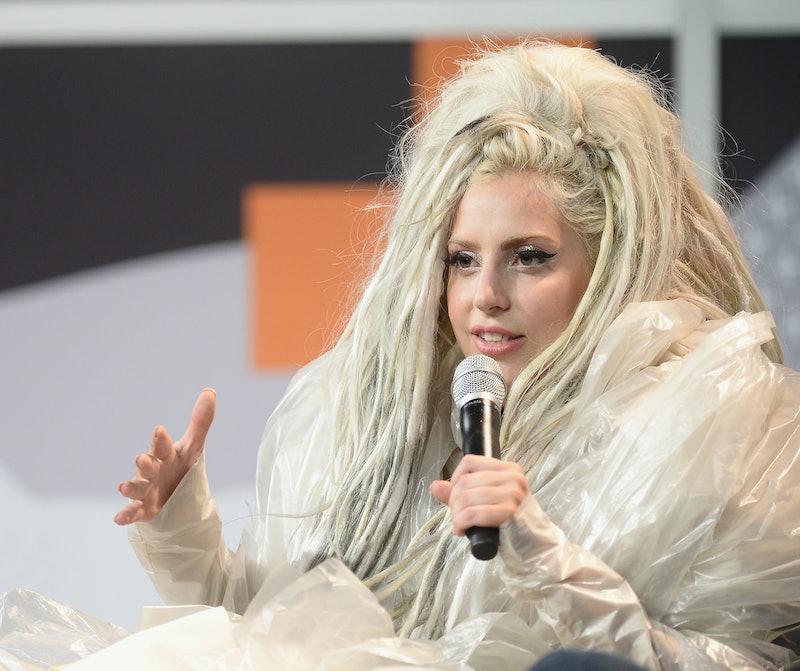 South By Southwest may be over, but the controversy surrounding Lady Gaga's gag-inducing set at the annual festival last week is still lingering. While the ARTPOP performer was seated onstage, she allowed artist Millie Brown to vomit colors all over her. As a result of soy milk, food coloring and fasting for two days, Brown claims that her demonstrations do not involve harming herself and rejected claims by Demi Lovato that they glorify bulimia.

In a statement to MTV News, Brown said:

I can understand why people would make that association, but my performance really is not a statement about eating disorders themselves. It's like using my body to express myself. I think a lot of people understand that I'm not trying to punish myself and my body in that way.

It may have been extremely gross to witness, but Brown's stance holds some weight. To say it glorified bulimia seems like a bit of a stretch. Consider the fact that Gaga is super focused on her fans, constantly pushing them to embrace self-expression, which contradicts her willingness to promote something she believes would encourage an eating disorder. As puzzling as some of her choices may be, it's obvious that they always contain a pro-humanity message, something of which her fans are fully aware. And in Lovato's statement, she mentioned how some things are misinterpreted. The fact that her opinion was formed by her personal battle with eating disorders, just goes to show that art can be translated in various ways, some of which have no relation to one another or to the creator's intended message. To Lovato's point, yes people are definitely influenced by what they see. But everyone views the situation through different lenses. While Miller claims that some people with eating disorders feel her performances are "liberating," Lovato isn't biting and is honorably looking out for influential eyes who mimic each celebrity movement with precision. In the end, ensuring that the right message comes across to the audience will always be an unenviable task.

More like this
Demi Lovato's New Song "29" Hints At Their Age Gap From Ex-Boyfriend Wilmer Valderrama
By Jake Viswanath
How Lady Gaga & Adele Are Closer To The EGOT All Of A Sudden
By Jake Viswanath
Lady Gaga Will Star In 'Joker: Folie À Deux' With Joaquin Phoenix
By Jake Viswanath
Everything To Know About The Musical 'Joker' Sequel – & Lady Gaga’s Role
By El Hunt and Sam Ramsden
Get Even More From Bustle — Sign Up For The Newsletter