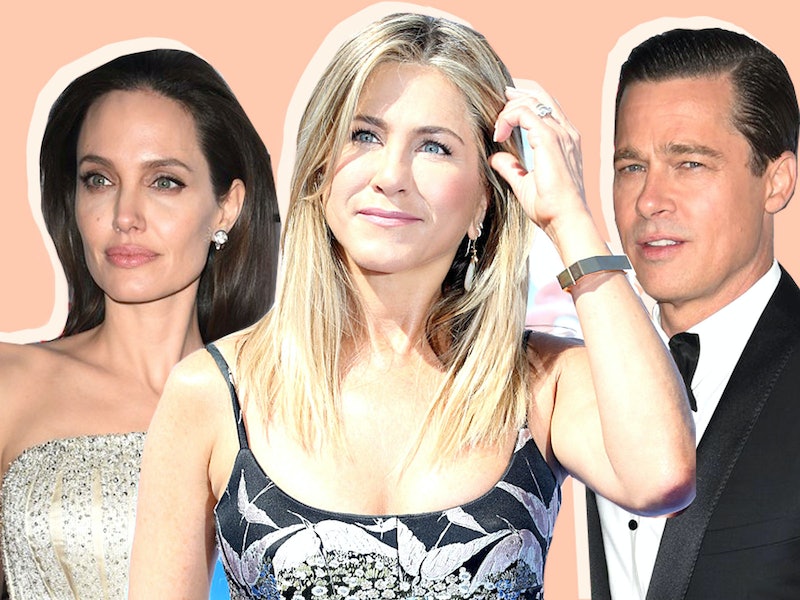 By now, you've probably heard the news that Brad Pitt and Angelina Jolie are divorcing. For fans of the duo, the split comes as a huge shock, and understandably, many people are having trouble processing their emotions over one of Hollywood's most beloved couples breaking up. Yet while it's natural to question what could have caused the demise, too many people are choosing to focus on something that has no relation to the news: Pitt's ex-wife. Bringing Jennifer Aniston into Brangelina's break-up is not only unnecessary, but problematic, considering that the star has made it clear she doesn't have, nor does she want, any connection to her ex's new relationship.

Ever since it was first announced in 2005 that Pitt was leaving Aniston and beginning to date Jolie, people have pitted the two women against each other. They labeled Jolie as a homewrecker and Aniston as a victim, while Pitt got away mostly scot-free. Even after both parties moved on, with Pitt adopting Jolie's children and Aniston entering relationships with men like Vince Vaughn and John Mayer, many people still couldn't get over the idea that Aniston was horribly wronged, deserving of our pity. Every time she went through a breakup or exited yet another month without having kids, fans and tabloids alike sent their condolences, acting as if Aniston was a constantly-heartbroken person who'd never find happiness or true love.

This, despite the fact that Aniston rarely talked about the break-up, and when she did, she made it clear that she didn't feel wronged or victimized. She was simply a woman who went through a divorce and moved on with her life, and wasn't looking for anyone's sympathy. Even when she married Justin Theroux, now her husband of over a year, reactions tended to be less "aw, that's great!" and more "thank god, she's finally found someone else." No matter what Aniston said or did, no matter how many years passed since her '05 break-up with Pitt, many found it impossible to separate her from her break-up with Pitt and her supposed victimhood.

And now, with the announcement of Pitt and Jolie's split, she's being brought back in the conversation once more. Immediately after the news was announced, countless fans tweeted about what Aniston must be feeling, assuming that she'd be gloating over the split. Aniston, of course, hasn't said anything about the break-up, and it's highly unlikely she will; she's made it perfectly clear that she does not want her life to be continually connected to Pitt's, so many years after their marriage ended. Yet fans can't help but add her into the mix, because they simply refuse to let the "Aniston was wronged and so we should pity her" narrative die.

But focusing on Aniston, even if it's out of love for the star, is the wrong reaction to have here. She has no desire to be part of the conversation, and by all accounts, she's perfectly happy with her current life and relationship status. Despite what many people seem to think, she wasn't sitting around waiting for Pitt and Jolie's marriage to fall apart, or sobbing each night over the failure of her relationship. Sure, as a woman once married to the man whose break-up is making headlines, it's probably that she has a few thoughts on the matter, but it's highly doubtful that she's feeling the kind of schadenfreude people so eagerly want her to believe. So let's leave her out of the Brangelina conversation, and simply let her live her life.

More like this
Harry Styles Just Split His Pants In Jennifer Aniston’s Face
By Sam Ramsden
Channing Tatum Calls Walking Away From Relationship With Jenna Dewan “Terrifying”
By Radhika Menon
Jennifer Coolidge Slid Into Ariana Grande’s DMs In The Most Iconic Way
By El Hunt
Jennifer Coolidge Recites “Jenny From The Block” Beside J.Lo In Her First TikTok
By Jake Viswanath
Get Even More From Bustle — Sign Up For The Newsletter
From hair trends to relationship advice, our daily newsletter has everything you need to sound like a person who’s on TikTok, even if you aren’t.