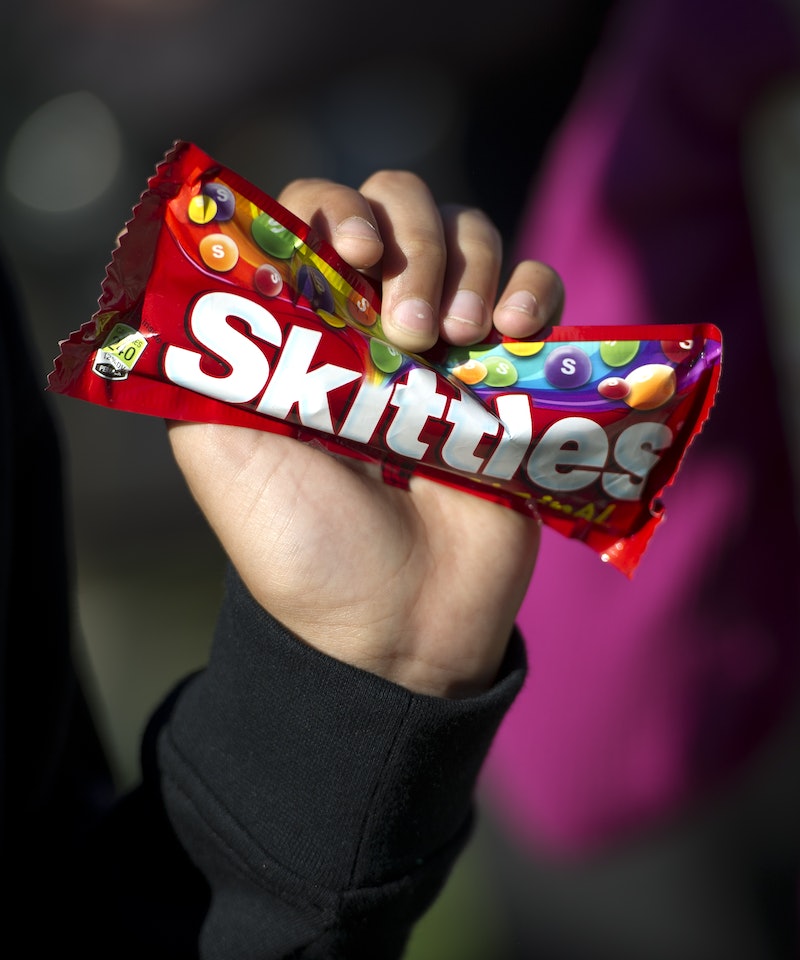 It's not surprising that in the wake of the Sept. 17 bomb explosions in New York and New Jersey, Donald Trump put the blame on the one thing he loves to hate: immigration. He also took up the opportunity to further castigate Democratic nominee Hillary Clinton for making everything worse, condemning her proposal to accept Syrian refugees. Donald Trump Jr., it looks like, agrees with his father, but came up with his own solution to solving the entire Syrian refugee crisis.

What is his nuanced, theoretically-sound, well-researched solution? Skittles. Taking to Twitter on on Monday, Trump Jr. tweeted a photo that effectively compared the nearly 4.8 million Syrian refugees fleeing war and persecution to a handful of candy. Social media went up in throes, saluting a SkittleGate of sorts with a #SkittlesWelcome hashtag to deal out some facts to Trump Jr.

The image is adorned with a Trump-Pence logo and a bowl of skittles and a tagline of: "If I had a bowl of Skittles and I told you just three would kill you. Would you take a handful? That's our Syrian refugee problem." (The grammatical error of a misplaced period is not a fault of any Syrian refugee, but most likely of the Trump campaign.)

He captioned the it with: "This image says it all. Let's end the politically correct agenda that doesn't put America first. #trump2016"

Clearly, the image does not say it all. Moving past the grammar mistakes, the math is all kinds of wrong. Mashable explains that there are 54 Skittles in a 2-ounce bag and assuming we can fill out a bowl in the image with three bags, that totals to 162 Skittles. Counting the three that apparently aim to kill, there is a 1.9 percent chance of death by Skittle (or as Trump Jr. thinks, a Syrian refugee terrorist). This is not just a harmful statistic to perpetuate but a mathematically ill-founded one. Think tank CATO Institute points out that "the chance of an American being murdered in a terrorist attack caused by a refugee is 1 in 3.64 billion per year." That, using math, means the chance of being killed in a terrorist attack is 0.000000027 percent.

It's important to recognize just how illogical this comparison is but beyond that, it's severely dehumanizing and completely oversimplified. It's this kind of messaging and rhetoric that works for Trump though and so of course, both sides of the political spectrum are using the #SkittlesWelcome to weigh in. Some, in Trump spirit, have adopted it to attack the Clinton campaign, but the majority are using it to start a more informed and compassionate dialogue. Here are some of the reactions:

Wrigley Americas contributed to the discussion, too, with a thoughtful response:

And Barack Obama's former speechwriter Jon Favreau did not hold back:

And many used the #SkittlesWelcome hashtag to emphasize their anti-Trump stance:

In an interesting twist of both karma and irony, BBC News reported that the man who took the photo of the Skittles in the tweet is a former refugee himself. David Kittos, 48, took the photo in 2010 and had posted it on Flickr. He told BBC News that he would never support any message that harms refugees, as he was a refugee from the Turkish occupation of Cyprus. Now living in the U.K., Kittos also added, "This was not done with my permission, I don't support his politics and I would never take his money to use it."

I think that's probably the best kind of #SkittlesWelcome response yet.