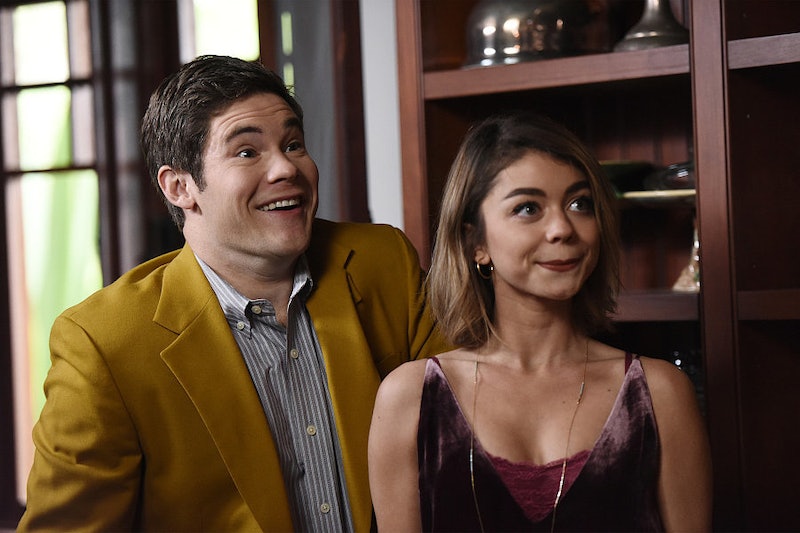 It’s the most magical time of the year — there’s a crisp fall nip in the air, the leaves are changing, and my favorite TV shows are returning after leaving fans heartbroken with suspenseful cliffhangers last spring. Though Modern Family didn’t leave viewers in a life or death white-knuckler, fans did take the Andy exit pretty hard. But, is Andy really gone? And what else can we expect from the Modern Family Season 8 premiere? In an interview with Bustle, Ty Burrell, who plays Phil Dunphy, hints at what fans will see this season, starting with what Andy and Haley 'shippers can expect for their OTP. “Well, it’s a little bit of a mystery," he teases. "If you were asking my opinion, I would say I would expect that we will see something happen there at some point. I don’t know if it will be this season or not. But, that doesn’t seem like a closed book to me."

So, maybe Haley and Andy aren’t getting together tomorrow, or next week, but viewers can feel a little better knowing that Phil Dunphy has our back. While Burrell couldn’t say too much about the Andy and Haley 'ship, he could share where the Season 8 premiere picks up for the Dunphy family. "We start the season where we left off, which is in New York City … The kids and the parents both tell each other that they’re going home separately and then decide to stay in the city and not tell the other group because they want a little bit of alone time," he says. "And, I won’t spoil that story. But, it’s very, very funny and we ended up going to New York for a couple of days to shoot some of that episode. So, there’s some really fun [New York City] scenes in the premiere."

So, the Dunphys take Manhattan! I can’t wait to see how it all unfolds in the Season 8 premiere Wednesday, Sept. 21 on ABC.

More like this
Helena Bonham Carter Doesn't Think 'The Crown' “Should Carry On"
By Sam Ramsden
You Might Want To Rewatch This Key 'On My Block' Scene To Understand 'Freeridge'
By Grace Wehniainen
The 'Freeridge' Cast Shared Their Hopes For A Potential Season 2
By Grace Wehniainen
A 'Terminal List' Sequel & Spinoff Are Reportedly In The Works
By Kadin Burnett and Grace Wehniainen
Get Even More From Bustle — Sign Up For The Newsletter
From hair trends to relationship advice, our daily newsletter has everything you need to sound like a person who’s on TikTok, even if you aren’t.