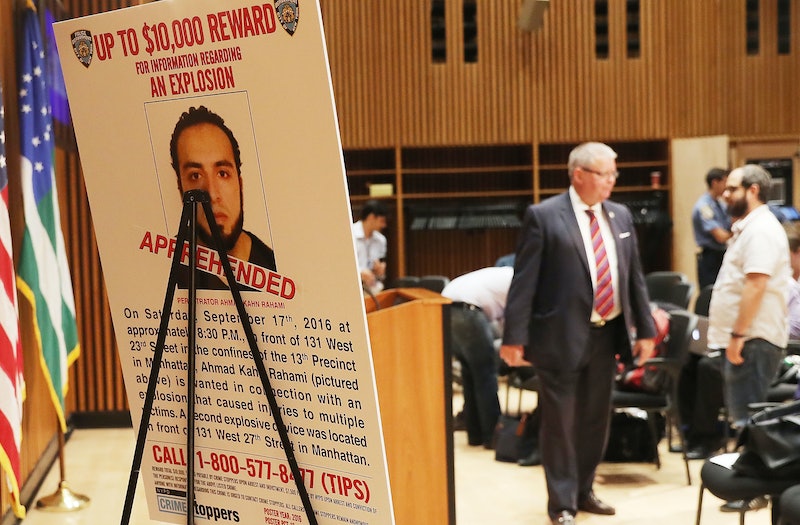 In the aftermath of the bombings in New York and New Jersey on Saturday, Sept. 17, authorities are questioning the suspect of the crime, Ahmad Khan Rahami. And in an interview with The New York Times, Ahmad's father said he reported his son's suspicious behavior to authorities in 2014, after an altercation with his other son. So how did this terrorism threat skirt past the FBI?

Mohammad told The New York Times: "Two years ago, I go to the FBI because my son was doing really bad, OK? But they check almost two months, they say, 'He's OK, he's clean, he's not a terrorist.' I say 'OK.' Now they say he is a terrorist. I say 'OK.'"

In a statement, the FBI confirmed that they conducted a preliminary investigation, saying "In August 2014, the FBI initiated an assessment of Ahmad Rahami based upon comments made by his father after a domestic dispute that were subsequently reported to authorities. The FBI conducted internal database reviews, interagency checks, and multiple interviews, none of which revealed ties to terrorism." However, when asked about the claim, officials said that Mohammad later told them he had made the comment out of anger and recanted it. According to The Guardian, he claimed what he had meant to say was that his son was hanging out with the wrong crowd, possibly gangs.

As for the domestic dispute, Ahmad was arrested for stabbing and possession of a firearm, but was not indicted by a grand jury, even though the arresting official said he was a harm to others. So how did this man, whose father labeled him as a terrorist, pass by FBI officials for two years?

It's easy to jump to assumptions — that the FBI didn't question Ahmad enough, or that they let him get away, but since we don't actually know what the investigation involved, we should presume that the authorities did all that they could and that at that time, he was not considered a terrorist. What we do know is that Ahmad Rahami is the only suspect in the bombings, and that five others were questioned and discharged. We also know that Ahmad is a naturalized citizen who came to America in 1995. He was directly linked to the devices found in New York and New Jersey.

It's interesting to note that The New York Times points out that Ahmad was in possession of a notebook with sympathetic opinions of jihadist causes when he was arrested by police. Even if he had been cleared of suspicion in 2014, something in the last few years may have changed that prompted his alleged actions.

It's scary to think that Ahmad's father might have had legitimate fears about his son's behavior and that something could have been done to prevent the attacks, but we don't know that that was the case. Authorities may not have been able to gather enough evidence to take action, so for now we have to trust that procedures were followed, and that those procedures do work, and that this series of events was an unfortunate outlier. But it's certainly worth a discussion on how terrorism threats are handled by authorities and how it can be improved in the future.