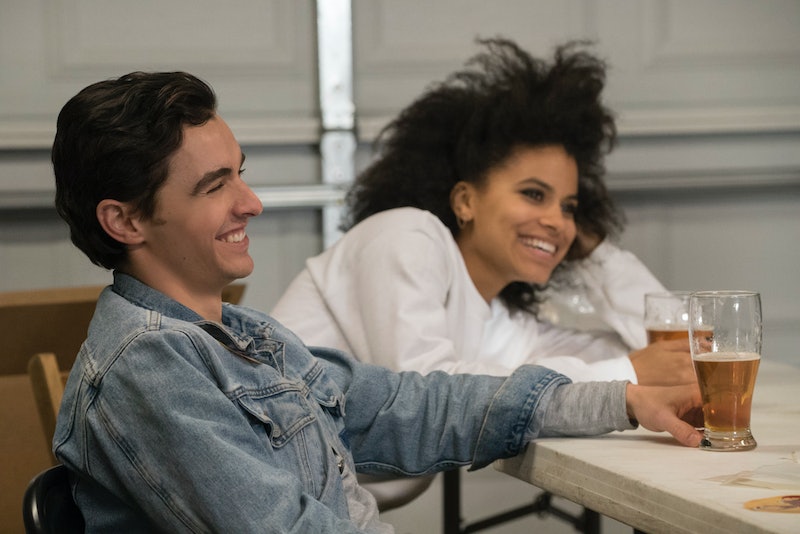 There's no shortage of TV shows that depict dating and relationships — but Netflix's new anthology series Easy provides an honest, refreshing look at what it's like to navigate relationships. Each episode is set in Chicago, but other than that, a diverse array of relationships are depicted on Easy and they are neither sugarcoated nor pessimistic. In short, they strike a realistic chord that's surprisingly hard to find on a TV series. For example, look at the episode starring Dave Franco and how it portrays the relationship between a young married couple who have a baby boy on the way. Episode 3 spoilers ahead.

It's clear that Matt (Evan Jonigkeit) is thrilled to become a father with Sherri (Aya Cash) — he proudly and eagerly shows the ultrasound photos to his brother, Jeff (Franco). But, the show doesn't gloss over the reality that parenthood is a frightening prospect for him. Matt is unhappy and dissatisfied at his current job, but he's already worried about saving for his unborn child's college education. Admittedly, I was skeptical about the depiction of his relationship with Sherri towards the beginning of the episode. He kept a significant secret from her by running an illegal brewery with Jeff out of the latter's garage, but that was purely his mistake, and it was later addressed in the perfect manner. My own nagging concern was that she'd end up being the woman who struggled to be "cool girl" while secretly resenting the fact that Matt skipped a planned visit to the hardware store to look at paint samples because he was sleeping off a hangover.

When Jeff and his partner, Noelle, urge Matt to immediately tell Sherri about the brewery, they comment that they love her but she's not exactly "chill." Although they were obviously encouraging him to do the right thing, the adjective "chill" struck me as a somewhat sexist brushoff — especially because it was used to compare Sherri to a more free-spirited woman, which seemed to perpetuate the trope of "cool girls" versus "not cool girls." But when Matt finally comes clean with Sherri, it's a breakthrough moment for all four members of the family because it improves all their relationships with one another, both romantic and otherwise.

Sherri's initial reaction is totally understandable — she storms to the garage brewery to tell Matt, Jeff, and Noelle that it was unacceptable to hide this from her and to remind them all that she and her husband have a lot at stake with a baby on the way. And, of course, there's the obligatory night on the couch for Matt. The two reconcile fairly quickly, but it's what happens in between that's even more important. Jeff urges Matt to be more assertive at work and to pursue a job that may be more satisfying — and it's exactly the tough love he needs to hear.

Meanwhile, Sherri meets with Noelle to apologize for losing her temper with everyone. She chalks it up to hormones and says she's embarrassed that she involved the couple at all when the issue was really between her and her husband. Noelle provides the perfect response — women should never invalidate their emotions by chalking them up to hormones. Sherri admits that she always worried Noelle must have viewed her as so "basic and boring" due to her Type A tendencies. She seems to envy Noelle's free spiritedness a bit, but the grass is always greener — Noelle openly admits that she often feels as though she doesn't know what she's doing and she admires Sherri's clear organization and sense of purpose each day.

After Matt and Sherri open up to Jeff and Noelle, they're in a far better place to communicate with one another. That's certainly not to say that they wouldn't have worked this out on their own — but it's refreshing to see both men and women be open about the vulnerabilities and insecurities they experience about themselves and their relationships. It helps dispel the mindset that we need to present our relationships as picture-perfect rather than talking out issues with someone we trust.

And, in the end, all four of them bond together during a fun night at the brewery — because Sherri is definitely not the uptight, boring person she believes herself to be. And, no matter how solid our relationships are, it's key to have other people in our lives to provide much-needed perspective at times. Romance isn't all roses, and it's important that TV reflects the realness of love — and Easy does that perfectly.