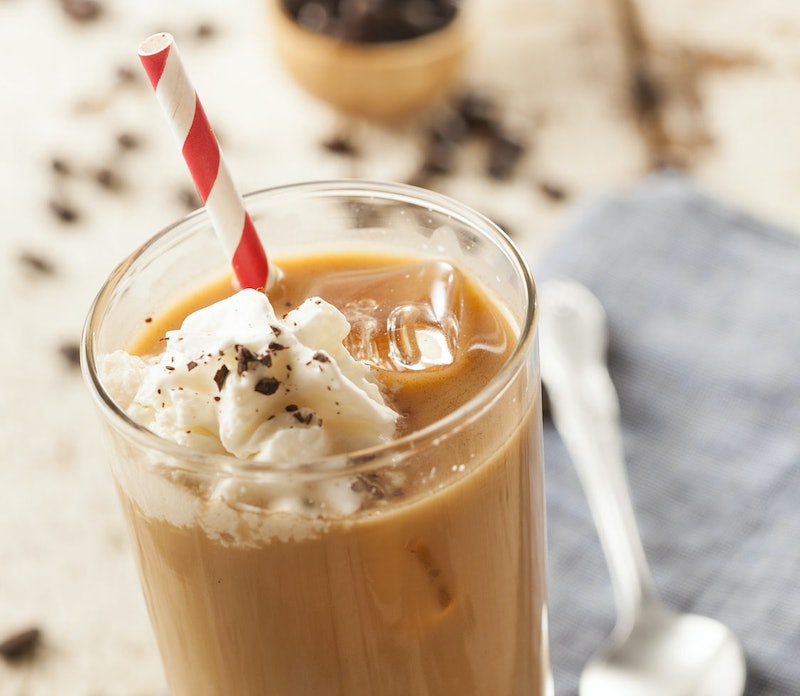 It’s common knowledge that coffee is the closest thing to hard evidence that God does, indeed, exist. But while waking up to a hot cup of freshly-brewed coffee is wonderful in winter, with spring's official onset, it's iced coffee season. But where did iced coffee come from? And why is it often more expensive than regular coffee? We've got the refreshing answers.

How did it start?

There are a lot of myths and legends surrounding the discovery of coffee, but the most charming is probably the tale of the 9th-Century Ethiopian goatherd who realized that his goats, after eating berries from a certain tree, were noticeably more giddy and excitable. He reported this to the abbot at his local monastery (as you do) and the monks soon discovered that, by roasting and then boiling the bean, they could stay alert all night for prayer. And thus was born the coffee break, probably.

But the origins of iced coffee are even more mysterious. One story traces it back to 17th century Vienna, where citizens experimented with new brewing methods after a departing Turkish army left behind a massive surplus in coffee beans.

Another tale suggests that iced coffee evolved from a French beverage known as Mazagran that consisted of espresso, lemon, and ice. It was apparently considered something of a risqué beverage, because if anything screams “risqué,” it’s coffee and lemons.

Fun fact: In the mid-90s, Starbucks and Pepsi partnered up and released a carbonated bottled version of the drink. It was a complete failure, but Starbucks CEO Howard Schultz credits it with paving the way for the bottled Frappuccino.

How Did it Become POPULAR?

As a consumer beverage, iced coffee still lags behind every other consumer soft drink; including iced tea, hot coffee, bottled water, and even energy drinks. Only 10 percent of iced coffee consumption occurs in the U.S.; most of the rest (86 percent) happens in Asian countries, which have a longer tradition of chilling the beverage. Only 20 percent of Americans drink iced coffee, compared with 83 percent who consume hot coffee.

However, its popularity in the states has grown over the last couple of years. In 2009, iced coffee accounted for 19 percent of coffee-based menu items; by the beginning of 2013, its share had risen to 24 percent. Young people, in particular, flock to the drink: 38 percent of people between the ages of 18 and 24 drink iced coffee, far higher than the national average and any other demographic.

It’s unclear what exactly precipitated this boom. After all, Toddy started selling the first mass-produced home cold brew system all the way back in 1965, and Dunkin’ Donuts — which claims to sell one-third of all iced coffee in the U.S. — introduced the drink more than 25 years ago. Starbucks started selling Frappuccinos in 1995.

One theory, propagated by global drinks analyst Jonny Forsyth, is that young people, having been raised on iced-cold and sugary sodas, want to integrate this into their coffee-drinking experience.

The recent rise of energy drinks may also have to do something with it: As an ice-cold beverage with a serious pick-me-up that can be served in a can, iced coffee offers most of the same benefits as a Red Bull — with the added bonus of not tasting like carbonated cough syrup.

There’s also the argument that Nancy Botwin in Weeds single-handedly made Americans aware of how wonderful iced coffee is.

You’ve surely noticed that a cup of coffee costs more cold than hot. But why?

You also need ice for iced coffee, which in turn requires an ice machine, which is a rather costly investment (around 12 bucks a day to rent one). Cold brewing coffee also requires more time, and time is money. Not to mention, the Japanese method of brewing requires more coffee, so that the ice doesn't dilute it.

VARIATIONS AROUND THE WORLD

There are several ways of making iced coffee. In Europe, and some places in the Middle East, an iced coffee is more like a Frappuccino — a sugary, milkshake-esque treat, complete with whipped cream, chocolate syrup, crushed ice, and a bit of coffee thrown in there somewhere. They’re essentially Frappucinnos if Frappucinnos were lovingly homemade and a thousand times more delicious and special.

The “Japanese method,” on the other hand, involves brewing hot coffee and immediately pouring it over ice. This immediately cools the coffee, preserving the brew’s acidity, and accentuates the coffee’s fruity, floral tastes. This is the easiest method, and produces a lighter, sweeter flavor. For those who like the acid taste of a French roast, this is the way to go.

Another option is to cold brew it. This method consists of mixing together coffee grounds and water and letting it sit in the fridge for at least 12 hours. Contrary to what some high-priced coffee machine vendors might lead you to believe, this doesn’t require any special machinery — just a pitcher, some coffee, some water and a filter. The result is a cup with a nutty, chocolatey, and notably less acidic flavor.

Cold brewed coffee is also way more caffeinated, because the grounds are absorbing caffeine for many hours before being filtered out. If you’re the type who can’t sleep when you drink coffee after 3, cold brew might not be your cup of ... err, coffee. If, on the other hand, you drink so much coffee that caffeine serves primarily to stave off headaches (not that I’d know anything about that), a cold brew might be right up your alley.