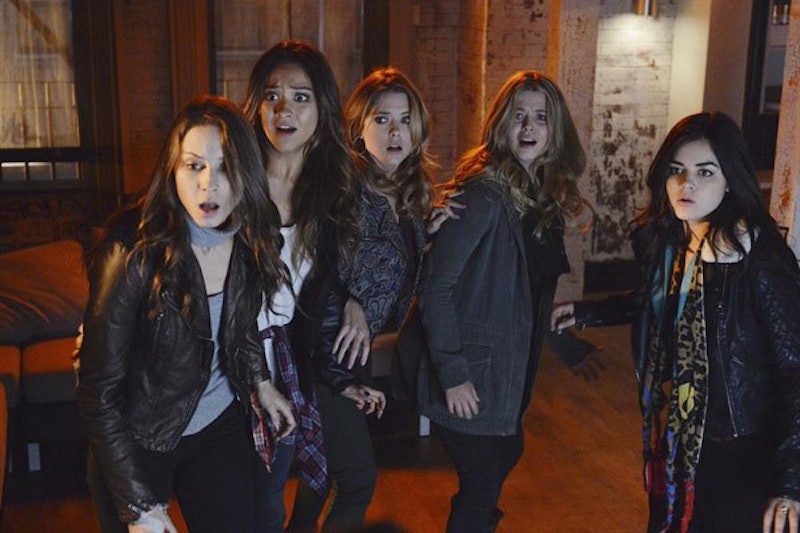 By golly, was the Pretty Little Liars finale something else! During the final episode of Season 4, Ali told the Liars EVERYTHING she knows about the night she went missing/why she ran away. We viewers have been waiting a lifetime for a moment like this. Even so, it was a lot of info to process (you bet I'm still digesting all of it), and I admire the Liars for not having multiple panic attacks. I'd be like, "Hey, Ali! One truth bomb at a time. I'm not cut out for this. Oh! But if you are going to pick only one piece of info, may I recommend telling us about the time YOUR OWN MOTHER BURIED YOU ALIVE? Because that might be one of the crazier things to happen on this show."

Story Time with Ali wasn't the only major event. "Really?" you ask. "Gosh, this sounds like quite an intense ep. What else went down?"

I repeat: “A” shot Ezra. With a gun. The season ended with the Liars and Ali almost unmasking "A," and Ezra bleeding on a rooftop. The latter was due to a wound. A wound inflicted by a bullet. A bullet that came from a gun. A gun that belonged to "A."

This must mean Ezra isn’t “A”/a part of the “A-Team,” right? Because why would this hoodied individual fire away at someone on his/her team? It looks like Ezra isn't actually EzrA after all. Ezra's just a pervy guy who wants to write a book.

What if when “A” shot at Ezra (and "A" missed), Ezra’s ducking was all a part of some scheme? You know, a choreographed "A" routine? An EzrA routine?

Or what if the "A" who shot Ezra isn't a part of the "A-Team" at all? What if Ezra hired whoever was in the hoodie to pretend to be “A” to throw the Liars off of his scent? ("A" and Ezra's rooftop entrances were spaced out fairly perfectly. A little too perfectly???)

What if the gunshot wound was not real? What if it was a WWE-style, special effects makeup'd "injury"? What if Ezra broke a fake blood capsule under his shirt to create the illusion of a gunshot wound?

What if when Hanna pointed the gun at "A," Ezra threw a super secret nonverbal signal his/her way that meant: "Don't worry, she isn't going to pull the trigger. But I'll give you an extra two hundo for the trouble anyway. Cool?"

What if when "A" did that sweet parkour move from one rooftop to another, Ezra threw another super secret nonverbal signal his/her way that meant: "Sick move!"

Oh my god. What is wrong with me? A character was shot, and I'm trying to figure out a way he could still be linked to "A"? The show has liquified my mind. I think I've been watching it for too long. (HAHA! No such thing.) I can't help but be skeptical of any rational/simple explantations, because, like, PLL is basically the anti-Occam's razor.