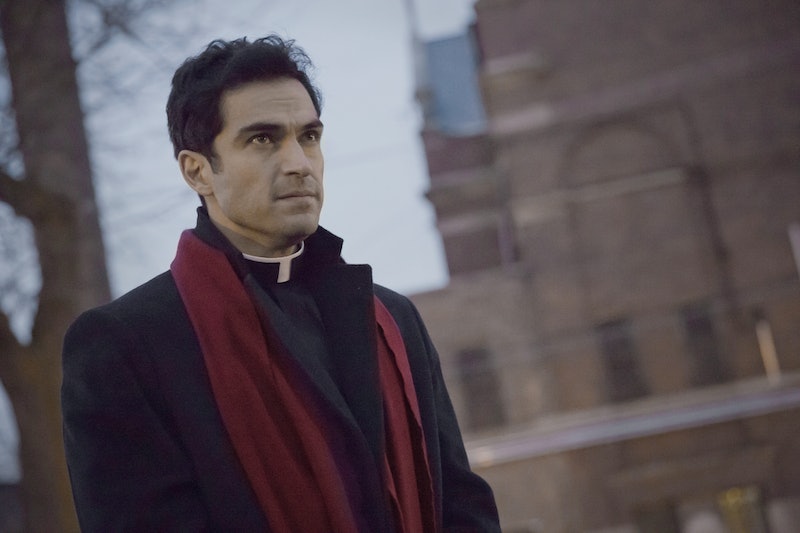 The Fall TV season officially began this week, and you know what fall means: pumpkins, leaves, candy corn… and Halloween! As the spookiest Halloween of the year approaches, the television landscape is reflecting the change in season with the premieres of shows like American Horror Story, Scream Queens, and FOX's adaptation of The Exorcist , premiering this Friday. As you have probably already guessed, this new series is an adaptation of the 1973 horror classic of the same name, which featured a head-turning performance from young actress Linda Blair. But how is the Exorcist TV show different from the movie?

Actually, it's going to be quite different from the Exorcist that people know and love, since it's not a direct remake or faithful adaptation of the story that originated in William Peter Blatty's terrifying novel. So is this tale of possession simply inspired by the original novel and film, or is it some sort of updated sequel? The answer lies somewhere in between.

At the show's Television Critics Association panel last month, creator Jeremy Slater made it known that he wanted to avoid the problems that plagued the original film's less successful sequels. "The problem with all the sequels is that they were trying to duplicate the beats of the original film,” he said, as reported by Deadline. “We’re conscious of that: We can’t retell the same story. We can only make a show that you haven’t seen before with new characters."

Indeed, this version of The Exorcist does sport original characters that audiences will be unfamiliar with. Gone is possessed little Regan MacNeil and her mother Chris and the priests who helped save them. In their stead, viewers will be introduced to a new matriarch, Angela Rance, played by Academy Award-winning actress Geena Davis, along with her family and new priests played by Sense8's Alfonso Herrera and House Of Cards' Ben Daniels. And gone is the recognizable Georgetown setting of the film, replaced by the streets of Chicago.

But FOX's take on the terrifying tale doesn't stand completely separate from the franchise that spawned it. "It was important to let everyone know that this is a continuation of an existing story," Slater said at the TCA panel according to Variety. That publication's report on the panel then indicated that, "Those acknowledgements are in the first episode, and they're there in part to indicate that decades have passed, and audience members should not expect Fathers Karras and Merrin to 'show up' at the home of the Rance family."

(Of course, audience members shouldn't have been expecting Karras and Merrin to show up anyway seeing as how spoiler alert! they both kicked the bucket during the events of the 1973 film.)

So the small screen version of The Exorcist straddles a tricky line between being its own separate thing but also being a continuation of the same story. That blurred distinction between reboot and sequel is exemplified by the plot of the first season, which contains elements both foreign and familiar to fans of the original. Once again there are two priests: one an older man who is experienced in exorcisms, and one a younger man with a more modern take on religion and the devil. And once again they join forces to help a mother in need… except this time it's not a single mother and her only child, but rather a family of four: a panicked mother, a father, and two teenage daughters.

That brings us to perhaps the single biggest difference between this new generation of the Exorcist franchise and its source material. While the original was relatively straightforward — we all knew Regan was possessed from the beginning — the TV show will add a dash of mystery to the proceedings. "The pilot presents the possession as a mystery," Entertainment Weekly wrote in its review of the series. "You know someone as a demon in them, but who?" Is it the father, who has recently suffered a debilitating brain injury? The eldest daughter who has become a shut-in? The younger daughter who is hearing voices in the wall? Or perhaps even the panic-stricken mother herself?

That element of mystery speaks to the larger scope of the show as a whole which — as an extended series rather than one novel or one two-hour movie — has to sustain a story over (ideally) several years. "Even in the scripting phase, we were very conscious of the fact that you can't tell an ongoing series where every season, every year, it's just another American family undergoing a possession," Slater told the audience at TCA, according to IGN. "You would burn out the audience really fast. I don't know how to write that show. I wouldn't want to watch that show. So it was important to start laying in bread crumbs right from the beginning, start introducing … our bad guys who are out there."

A version of The Exorcist where humans are just as evil as the devil himself? Now that's a scary concept.