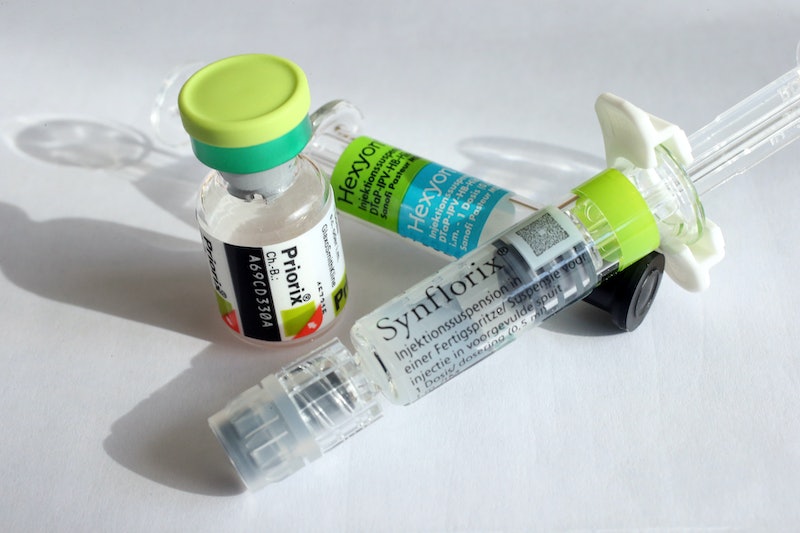 Whether it's aliens, JFK's assassination, or reptilian politicians, everybody loves a good conspiracy theory. Nearly half of Americans believe in at least one health 'conspiracy,' a new study indicates. Do you think Big Pharma deliberately discredits 'natural' cures so they can turn a greater profit? Well, if you do, you're... not alone, at least.

Researchers at the University of Chicago asked more than 1,300 Americans about their level of agreement with six health conspiracy theories, which dealt with topics like vaccines and cancer-causing cell phones. The study found 49 percent of participants agreed with at least one of the theories, while 18 percent agreed with three or more.

Here are the study's six theories that apparently have many, many Americans looking over their shoulders...

1. The FDA is deliberately preventing access to "natural" cures because of drug companies

The greatest number of respondents in the study (37 percent) agreed with the theory that the Food and Drug Administration is "deliberately preventing the public from getting natural cures for cancer and other diseases because of pressure from drug companies."

These people believe that there's a "hidden cure" for ailments and diseases, but health bigwigs are denying Americans access because pharmaceutical companies don't find it profitable. One big feature of the conspiracy theory is that the cure for cancer has already been discovered, but drug companies, doctors, the FDA, and the media have suppressed it to keep generating money from cancer patients.

2. Health Officials Know Cell Phones Cause Cancer But Are Doing Nothing To Stop It

20 percent of Americans believe that the government has full knowledge that cell phones can cause cancer, but they're not taking action because large corporations won't let them. A common theme with these theories is that it's all about the money, it seems.

There's been widespread debate over whether or not your trusty smartphone causes brain cancer, with some research indicating there's no proof and others claiming radiation is spurring tumor growth.

Some Americans believe the CIA purposefully spread HIV in African American communities "under the guise of a hepatitis inoculation program." While only 12 percent of the study's participants agreed with this theory, such speculation has been making the rounds for years.

Past studies have surveyed African Americans specifically, and found a good amount of the demographic felt HIV was created by government scientists to wipe out or control their population. Even post-apartheid South African President Thabo Mbeki once accused the U.S. government of manufacturing the disease in military labs. Similar theories say gay men were deliberately injected with the virus during hepatitis B experiments.

4. The Rising Popularity of Genetically Modified Foods Is Part of a secret Program to Shrink the Population

12 percent of people from the study believe the "global dissemination of genetically modified foods" is part of a secret program called Agenda 21. The theory states that the Rockefeller and Ford foundations created the program to control the world's population.

Agenda 21 really does exist — as a nonbinding "action plan" filled with suggestions by the United Nations, created during an international summit in Rio de Janeiro. It outlined resolutions on sustainable growth and encouraged nations to conserve their resources, and ultimately launched a platform for naysayers to claim it was a way to eliminate private property rights and basically take over the world.

5. Doctors and the Government Know Vaccines Cause Autism, but Do It Anyway

This one's been at the forefront of contention lately, with celebrities like Jenny McCarthy and Kristin Cavallari speaking out against vaccinating their kids. Some people support the belief that vaccinations cause autism and other psychological disorders — and say that doctors know this too. Still, conspiracy theorists believe that the government and medical experts push vaccines on kids anyway.

20 percent of respondents in the study agreed with the theory. Previous studies have shown that people who generally believe in conspiracy theories also tend to ignore scientists' opinions about vaccines — in short, rejecting science. Way to go.

6. Public Water Fluoridation Is A Way For Chemical Companies to Dump Their Toxins

12 percent of Americans believe that public water fluoridation is "really just a secret way for chemical companies to dump the dangerous byproducts of phosphate mines into the environment."

Here's some background: fluoridation in public water was implemented in the 1940s. The chemical addition was said to help with dental health by reducing cavities and tooth decay. Conspiracy theorists insist its essentially toxic waste that's being pumped into our pipes, taken from chemical companies looking to get rid of their byproducts.

So, is it just paranoia that has nearly half of Americans thinking the government is out to make the public unhealthy (or, um, push us towards an early death?) Not necessarily, says study researcher Eric Oliver. He tells LiveScience that in cases of uncertainty and complexity, people tend to go with the belief that more hostile powers are at work.

"These narratives seem like very compelling explanations for complicated situations," Oliver says. "... If you hear a noise in the bush, it's much more adaptive to believe that there's a predator there than not."

The results also indicate that conspiracist beliefs are related to people's health behaviors: Those who agree with more theories have a greater tendency to pursue alternative medicines, buy organic or farm foods, and use herbal supplements. So-called "high conspiracists" are also less likely to get annual checkups, use sunscreen, or get vaccinated.