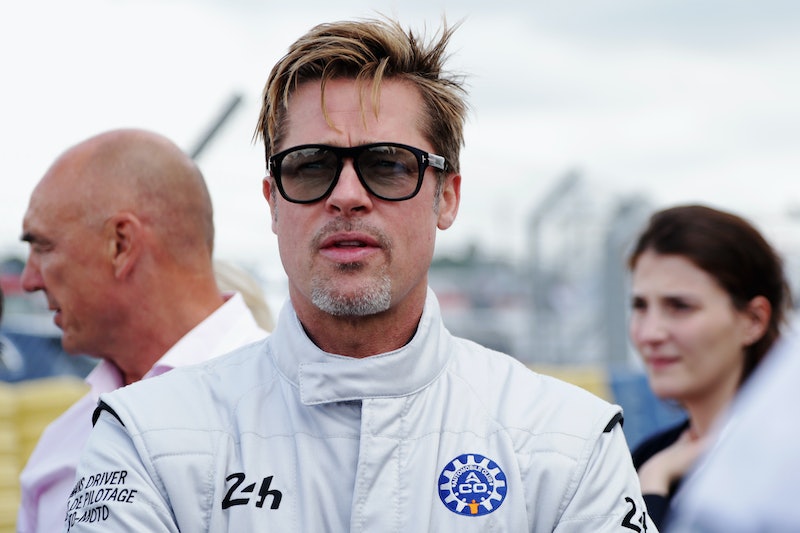 The current media flurry surrounding the sudden news that Brad Pitt and Angelina Jolie are divorcing has been rife with as many lies as it has truths and half-truths. One of the many allegations going around as to the cause of the divorce is a claim of Pitt's alleged substance abuse being the last straw for Jolie. While it seems both premature and unfair to cite that as a legitimate cause for the demise of one of pop culture's most beloved couples, there is a single half-truth in the rumor: Pitt has a history of using alcohol and drugs to self-medicate. The actor has openly spoken about his past use of marijuana and his use of alcohol, many times over the last decade. The fact that he has been so open with fans and the public about it makes it all the more disappointing that people would use it as a reason to tear him down now.

There have been many, many claims over the years about Pitt's continued and problematic substance abuse over the years. While there haven't been as many genuine interviews from the actor as there have been rumors put out by the tabloids, the fact that these interviews do exist should be all the motivation that fans need to go straight to the source. Instead of drawing our own conclusions about his present and future, a simple look through his past would reveal that Pitt has always been honest about the effect drugs and alcohol have had on his life.

When talking about his stoner character Floyd from the film 1993 True Romance with Rolling Stone, Pitt mentioned that it was his idea for his character to be a stoner in the first place:

"For that one, I did a lot of studying. Ev­eryone's met a Floyd. Or been a Floyd. It's either the roommate you were trying to get rid of, or you were that roommate... I called up [the director] Tony Scott a couple of days before, because I couldn't figure out why the character talked so much and gave everyone up. I said, 'Can he never get off the couch?' 'OK.' 'Can he be a stoner?' 'Yeah.' And that was it."

Pitt also mentioned in the same interview that, though the idea didn't come to him when he himself was high, stoners are "very creative."

If you've ever been wondering how the actor got involved with the project Inglourious Basterds, Pitt said in an interview with the Guardian that Quentin Tarantino pitched the film to him in the summer of 2008 in France — and that they may have been drunk or high or both while they discussed it:

"All I know is we talked about backstory and we talked about movies into the wee hours. I got up the next morning and I saw five empty bottles of wine on the floor. Five. And something that resembled smoking apparatus, I don't know what that was."

Tarantino would later confirm this in an August 2009 interview with Jimmy Kimmel, identifying the smoking apparatus as a "soda can bong."

During a visit to the Howard Stern show in order to promote, Tarantino confirms that he and Pitt talked over drinks — about "five bottles of Rosé" — and that the actor "[pulled] out a brick of hash" and offered him some of it. He also mentioned this conversation, which went on until 3 a.m., happened after Pitt had spent all day in hospital with Angelina Jolie, who was there recovering from the birth of Vivienne and Knox.

Pitt himself appeared on Real Time With Bill Maher, where he again opened up about his weed usage. The world got the pleasure of learning that the actor is an "artist," who can roll "perfect joints," but he reaffirmed that he has given up drugs now that he has his children to think about. "I'm a dad now," he said. "You want to be alert, and my eyes used to glaze over when I did that."

In an interview with PARADE , Pitt admitted that the '90s were a rough time for him and that he dealt with it through the use of marijuana,

"I spent the ‘90s trying to hide out, trying to duck the full celebrity cacophony. I started to get sick of myself sitting on a couch, holding a joint, hiding out. It started feeling pathetic. It became very clear to me that I was intent on trying to find a movie about an interesting life, but I wasn’t living an interesting life myself."

In a cover story with The Hollywood Reporter, Pitt again opened up about his drug use in the '90s, saying, "I got really sick of myself at the end of the 1990s: I was hiding out from the celebrity thing; I was smoking way too much dope; I was sitting on the couch and just turning into a doughnut; and I really got irritated with myself." Later, after a trip to Casablanca that opened his eyes to "poverty to an extreme [he] had never witnessed before," he decided to get clean. "I just quit. I stopped grass then — I mean, pretty much — and decided to get off the couch."

During a Los Angeles screening of The House We Live In , a documentary that looks into the United States' drug epidemic, Pitt joked to the audience, "I'm Brad Pitt and I'm a drug addict," before going on to say, "No, my drug days have long since past." He then spoke out about the efforts to eradicate the illegal drug trade in the country, calling the drug war a "charade" due to the complete lack of progress and the "flawed" system.

In an interview with Esquire in the June/July issue, Pitt is described as a man who "used to smoke a lot of weed," and admits that he was worried about how much of a problem his drug use been in his life before:

"For a long time, I thought I did too much damage — drug damage. I was a bit of a drifter. A guy who felt he grew up in something of a vacuum and wanted to see things, wanted to be inspired. I followed that other thing. I spent years f*cking off. But then I got burnt out and felt that I was wasting my opportunity. It was a conscious change. This was about a decade ago. It was an epiphany — a decision not to squander my opportunities... Because otherwise, what's the point?"

As shown in the interviews above, being forthright about his past struggles with drugs is all the actor has ever done, so the fact that rumors would start up now in the absence of any explanation from him about the cause of his divorce is really disappointing. When a celebrity's honesty with the public is used as a reason to tear them down later, we can only look to ourselves as the reason for why more and more celebrities are electing to keep their private lives as private as humanly possible.