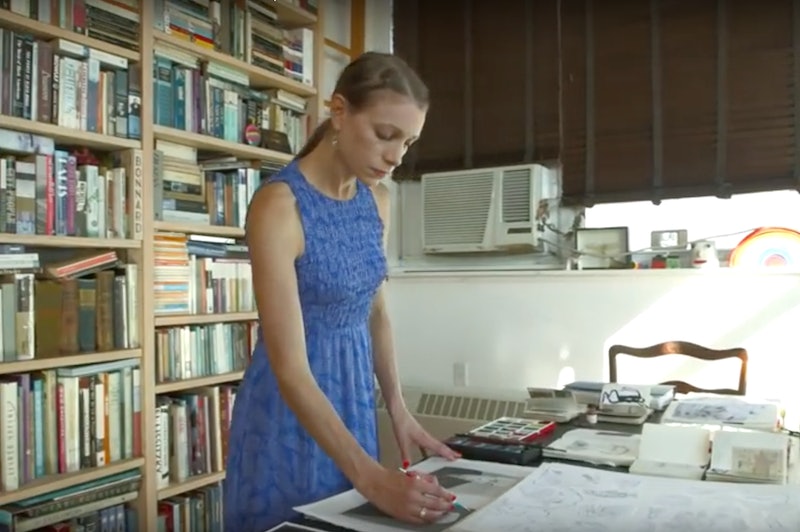 On Thursday, the MacArthur Foundation announced who would receive their prestigious "Genius" Grant — and one of the names on that list was the writer and artist Lauren Redniss. You may never have heard of Redniss, but I guarantee she's about to become one of your favorite new writers. Redniss's MacArthur Fellowship will give her a generous amount of money to pursue her dreams — but until the LA Times pointed it out, she hadn't even considered that she could get rid of her foldable Murphy bed and get a real studio.

One of the coolest things about Redniss's work is the way she combines art with written text to create what she described to the MacArthur Foundation as a "blend of fact and feeling." Redniss's first book, Century Girl , is about Doris Eaton Travis, a dancing star of the Ziegfield Follies theater group, who was 99 years old at the time Redniss began writing the book. Redniss says she "wanted to create books where every page was a surprise," and she certainly achieved this goal: Century Girl is a startling and beautiful combination of drawings, photos, newspaper clippings, and Redniss's own writing. Put together, the book brings 20th century America to glorious life on each page.

Next, Redniss went on to create Radioactive, a visual biography of Marie and Pierre Curie which delves into their love story as well as their work in the sciences. Interspersed throughout, Redniss has scattered reminders of the gruesome repercussions of their discoveries — such as Hiroshima and Chernobyl. But my favorite part? The book's front cover is glow-in-the-dark.

In 2015, Redniss published her third book, Thunder and Lightning , which has a fabulously unique premise. This book is about weather — and the impact it has had on humans throughout time. It may not be something we often think about, but the weather has affected our politics, our wars, our religions, and even our treatment of each other. It was thanks to a storm that the English defeated the Spanish armada; it was most likely a tsunami that led people to think God was flooding the world; it was cold weather, and the crop failure that ensued, that was blamed on women in Salem and led them to be hung as witches.

These ideas are already fantastically original, but upon receiving the MacArthur Fellowship, Redniss hinted that there might be even bigger and better to come. "I have a drawer full of ideas that I write down and file away, usually because they seem too far fetched to pursue," Redniss explained in a video produced by the MacArthur Foundation. "Because of the MacArthur, I think I'm going to open that drawer and look back at those ideas with a different sense of what might be possible."