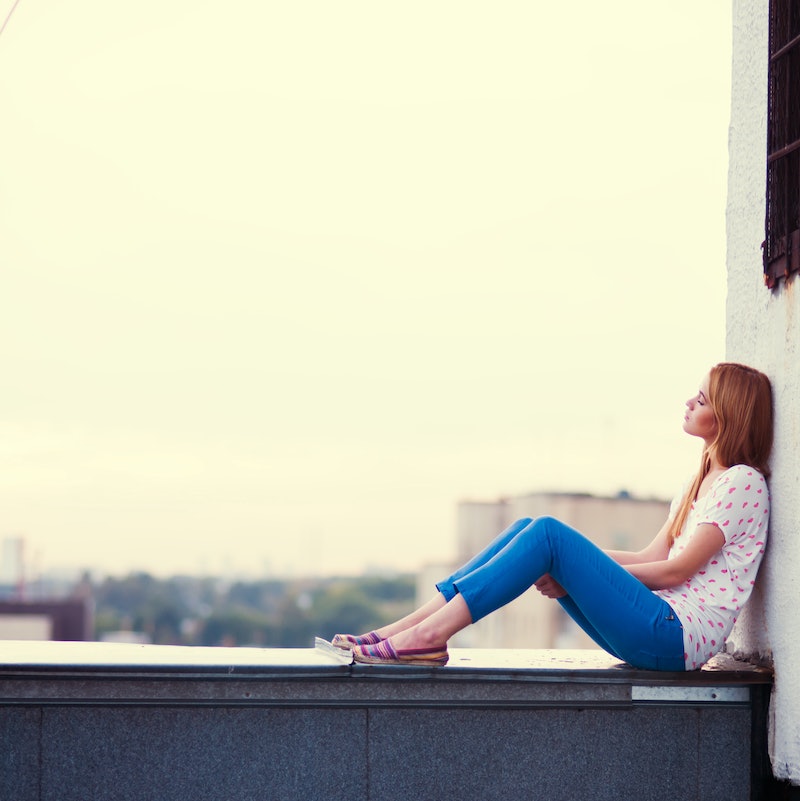 With everything going on in the world, it’s easy to see why we Millennials are an anxious bunch. From ISIS to the possibility that President Donald J. Trump could actually be a thing, there's a lot on our minds right now. So you might be surprised to find out that Millennials actually fear a different kind of monster — loneliness. A recent VICE study posed the following question to 2,500 Millennials in the UK: “What are you most scared of?” According to the results, which were compiled into the VICELAND UK Census, a majority 31 of percent of people said their worst fear is never finding love. In fact, that beat being homeless, losing a job, and being in the middle of a terrorist attack.

When you split the results by relationship status, 42 percent of singles said never finding love was the number one thing they feared the most. Married folks and those already in relationships were more likely to put being homeless at the top of their fear list.

So what are we afraid of by not finding love? Ultimately, it comes down to loneliness. Dealing with feelings of loneliness can seem like a huge struggle, and studies have found loneliness can have the ability to make you physically sick. Feeling lonely is such a personal experience that it’s really hard to explain to others who don’t get it, but if anything, just know, you have it in you to overcome it. It's important to note that being alone and loneliness are two separate things. There are plenty of singles who live fulfilled lives and plenty of lonely people in relationships.

If you're single, looking, and feeling lonely, here are ways to overcome that feeling, according to experts:

1. Remember That Being Single Is Not A Death Sentence

“It can actually be a time to learn more about oneself and experience the greatest self-growth,” psychotherapist Mary Beth Somich, MA, EdM, LPCA tells Bustle. “Feeling lonely as a result of being single can actually inspire individuals to have new experiences that they would not have put themselves out there for otherwise.”

According to Somich, you can do anything and everything from joining a fitness club to getting a dog. In fact, having a pet is a great idea since interaction with pets is known to release serotonin and oxytocin in the brain, which stimulate feelings of connection and happiness.

2. Figure Out Where Your Feelings Of Loneliness Come From

“If you feel it to be the latter, it may be important for you to delve into those feelings further in order to understand why you, alone, are not enough for yourself,” Somich says.

Single and lonely, guess what? There are probably some married people out there who may be even lonelier than you. “Culturally, there is a lot of emphasis placed on coupling, marrying, and finding a significant other. This pressure can be overwhelming. I have witnessed many women stay in relationships out of fear of becoming single and lonely, when it could be debated that the life they are living now may actually be a more isolating one,” Somich says. “While we often associate being single with being lonely, or alone, the two are not one in the same. Often times, loneliness can be actively avoided, and having a strong support network as a single person can provide a wealth of connection.”

4. Take Some Time To Really Know Yourself

"What we often translate as loneliness — a deep ache that we often feel needs to be completed by someone outside of ourselves—is really loneliness from not allowing ourselves to truly know who we are at a deep Soul level,” spiritual author and guide Heather Kristian Strang tells Bustle.

According to Strang, the best medicine in this case is to allow for some “daily nourishing time” with yourself by taking time away from distractions to actually “hear the deeper call of your Soul.” It’s really not that complicated. It’s actually as easy as being out in the nature, walking, or meditating. It can also include just sitting quietly and journaling.

5. Get Out There And Do Something About It

"Be courageous, be adventurous, and sign up for something new and out of your comfort zone,” Didi Wong, Integrative Wellness and Life Coach tells Bustle.

Wong suggests taking salsa lessons, traveling, and checking out art exhibits. You can even volunteer, take a language class, or even join a dating site. If you are uncomfortable going solo, then ask a friend to join you. The more you communicate with others, the more likely you are to be invited to places. But above all else, “In order for things to change (and in a positive way), you have to think in a positive way. It can be really intimidating at first, but you will never know until you try,” Wong says. “Be fearless, and put yourself out there – you are worth it for someone to meet!”

Most importantly, know that you don't have to feel like this. “Loneliness is a feeling that can be erased,” Wong tells Bustle. “We live in a world full of wonders, and there is so much that is yet to be discovered."