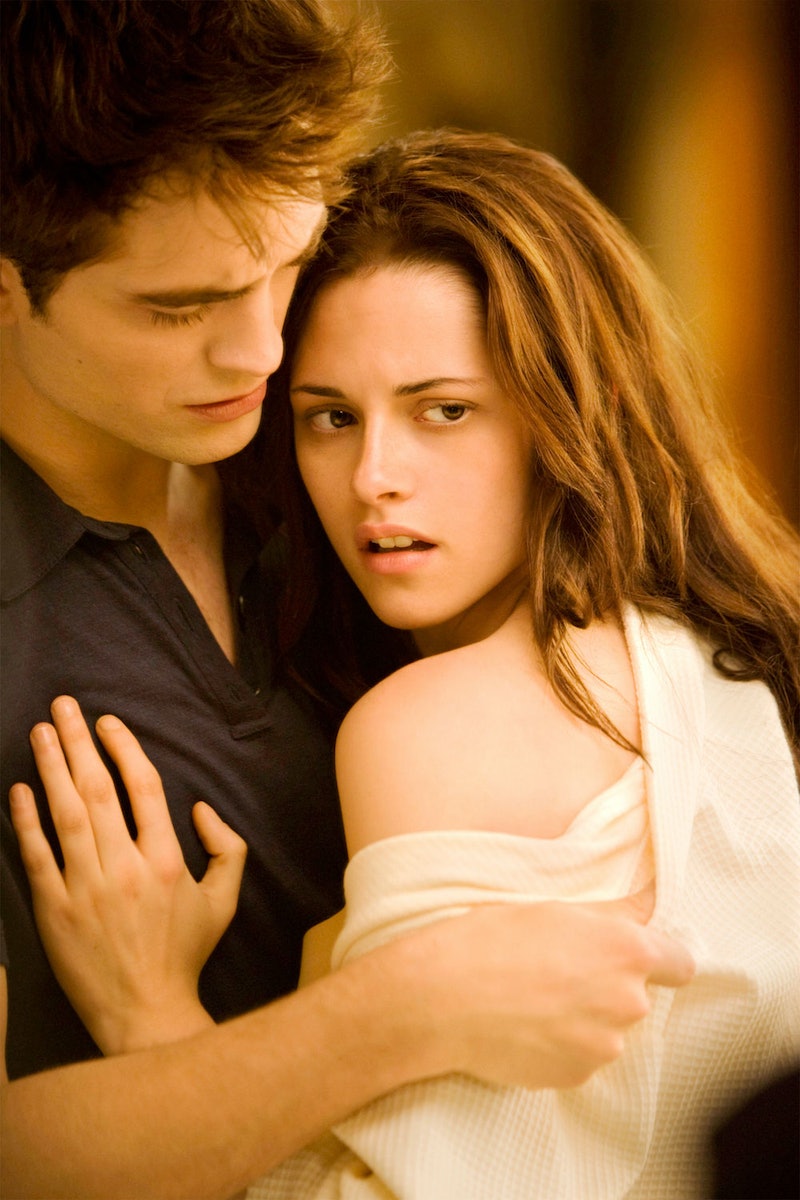 Get ready for a “Do you feel old yet?” moment folks, because The Twilight Saga turned 11 years old this year. Yep, the story about a 104-year-old vampire's obsession with a teenage girl is as old as a middle schooler! Back in the aughts, during what originally started as my attempt to read the books “ironically,” I became hooked on the story of clumsy Bella and frigid Edward's forbidden romance. Every time I heard someone claim that Vampire Edward and Werewolf Jacob were “textbook abusive,” I rolled my eyes so far back into my skull that it gave me headaches. So, what happened when I reread Twilight as an adult feminist? Well, I was able to view the text from a much different standpoint — and I didn't like everything I saw.

First of all, I just want to say that Stephenie Meyer's young adult series was groundbreaking for so many excellent reasons. Young adult literature as we know it didn't exist in such a public way when these novels were first released, and I believe Meyer had something to do with that. She inspired countless authors to write, and she motivated many young people to read. All good things. But that doesn't mean we should ignore some of the more controversial moments in The Twilight Saga.

First, let's take a look at what I'd argue is the main point of Twilight: the characters. Namely, the love interests. Are Bella Swan's two paramours — Edward Cullen and Jacob Black — abusive?

Now people will argue that if you were to take away the danger of vampires and werewolves, this wouldn't even be an argument, because Bella is only afraid of Edward because he sucks blood and Jacob is only volatile because he is a werewolf. But their abuse of Bella is more about their attitude towards her: They assume her life would be worse without them to protect her, and they protect her even when she doesn't ask for it and even when it involves exposing her to other harms.

But there are more blatant examples of abuse, too: Jacob forces a kiss on Bella, and it has nothing to do with his werewolf rage; Edward has to throw Bella through a glass table, but only because he surrounded her with hungry vampires. You can't excuse their behavior with the argument: “Well, it's a fantasy novel."

Here's the thing: Just because something technically makes sense within its own universe doesn't make it any less offensive. Take for example Meyer's treatment of the Quileute people. Yes, it's awesome that the trilogy featured Natives. Yes, it's incredible that Bella had a Native love interest. Yes, it's cool that many of these characters were played by actual Native actors in the movies. No, it's not cool that Meyer re-wrote the history of the Quileute people, turning them into angry beast-like beings that cannot control their anger without physically turning into a pack of dogs. This is not a fictional tribe; these stereotypes and stories and legends will likely follow this very tribe of Native Americans for as long as Twilight remains popular.

Many of the Quileute people weren't happy with the portrayal, and many resented the fact that their homes had been turned into tourist traps by twihards who wanted to see the 'real' werewolf tribe lands of La Push. However others have welcomed the spotlight, as it finally gave them a voice to dispell any myths about the tribe.

When I first read Twilight, I loved it because it was a fun mix of macabre and romantic. I loved how unapologetically melodramatic it was. But after revisiting the movie and the book, I believe that my initial feelings about the trilogy were wrong. I downplayed legitimate critiques of abuse, of misogyny, of racism. Many people have called Twilight "poorly written," and I do believe that those attacks are somewhat rooted in literary snobbery. The real issue here isn't the debate over whether or not this is well-written; the issue here is whether or not these books normalize abusive relationships and stereotypes of Natives. I think they do, and I hope that future authors take into account the good parts about Twilight and take the bad parts into thoughtful consideration when writing their own young adult fantasies. Because here's the thing: young adults are impressionable, and they're desperately looking for something that will both excite them and help them understand the dark sides of their personalities, just like Twilight did. But this information can come in the form of healthy relationships — or unhealthy relationships that are explained as such.

After re-reading Twilight, I understood that there were multiple reasons why I didn't have a problem with the story as a teenager: first, I didn't understand what feminism meant, but secondly, I had no real frame of reference for what true love really meant. So how was I supposed to know the difference between healthy, passionate love and abusive, passionate love if Twilight was my first time reading about either?

More like this
Meghan Trainor & Daryl Sabara Are Expecting Their Second Baby
By Jake Viswanath
Jessica Simpson On The Time She Was Pursued By A Backstreet Boy & An *NSYNC Member
By The Editors
Netflix Shut Down 'Bridgerton' S3 Rumours About A “Very Dark” Storyline
By Bustle
We’ve Entered The Hot Boy Reader Era
By Samantha Leach
Get Even More From Bustle — Sign Up For The Newsletter
From hair trends to relationship advice, our daily newsletter has everything you need to sound like a person who’s on TikTok, even if you aren’t.