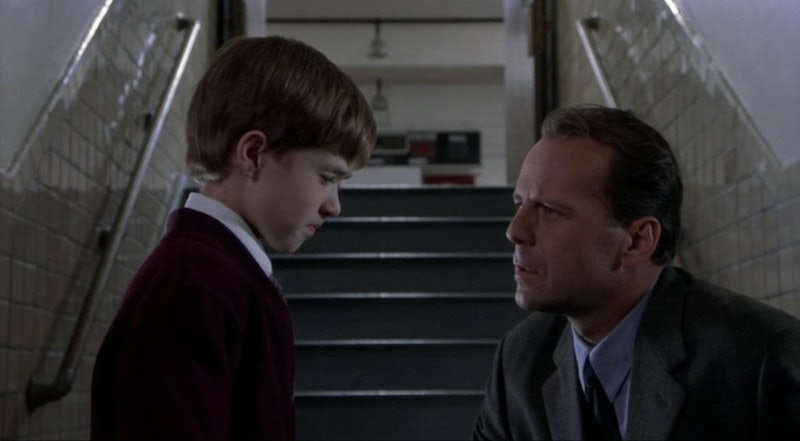 As an ovary-haver in her late 20s who occasionally navigates the choppy waters of modern dating, I know that Halloween can be tricky. Maybe you've always been interested in having children, or maybe the thought of having a child scares you almost as much as student loans. Either way, in honor of the holiday and the children you may or may not ever have, it's about time you celebrate by lining up a horror film marathon: a marathon of the best horror movies with creepy kids. If your biological clock is ticking, this is sure to make it stop for the length of time it takes you to get over finding children chilling and repellant. If your biological clock isn't ticking, well, these are probably your favorite movies already.

Luckily for us this Halloween, there is no shortage of seriously creepy children in the horror movie landscape. Arguably, this is because creepy children are so much creepier than creepy adults and thus contribute more powerfully to the audience's crushing sense of unease than your garden-variety adult-sized psychopath. Presumably, it could also be because studios get to pay child actors less? It's just cost-effective, OK? Anyway, make sure you line films featuring these singularly awful kids up, so you'll never want children ever — probably.

1. Cole Sear From The Sixth Sense

This kid seems all sweet and nice and everything. But then he tells the protagonist-psychiatrist that he can see dead people and everything starts getting pretty weird. It just goes to show: you should never trust a child, no matter how nice they seem.

2. The Kids With The Weird Eyes From Village Of The Damned

When all the women of child-bearing age get pregnant simultaneously overnight in an English town, you have a hunch that their offspring might be, well... a little off. You'd be right: the women give birth to these platinum-mopped emotionless kids who can read minds and make adults do whatever they want them to do. It just goes to show that next time you want to conceive a child? Don't.

3. The Grady Twins From The Shining

Because when poor Danny (a non-creepy, or OK, not that creepy child) encounters the Grady twins in the corridor and they ask him if he wants to play "forever," my heart stops for a second.

4. Damien In The Omen

Damien is the worst. Not only is the way he comes into the Thorn family totally objectionable (the mother Katharine gives birth to a baby that she doesn't realize has died, and the hospital chaplain persuades Robert Thorn to take Damien instead and pass him off as Katharine's biological son, which is so not OK), but he's always doing creepy-ass stuff.

When Damien's nanny leaps to her own death, shouting joyfully "Look at me Damien! It's all for you!" we know something seriously dark is up. You, too, might get pregnant, and then the father of your child thinks it's funny to do a little switcheroo, and the next thing you know you're looking after the spawn of Satan. It happens all the time.

5. Rhoda Penmark From The Bad Seed

If the creepy living-doll appearance wasn't a red flag enough, let me spell this out for you: adorable 8-year-old Rhoda Penmark doesn't forgive easily. When a classmate of hers beats her at penmanship, the next thing we know, he's drowned in a lake. So, even if you have a kid who's a total overachiever and really focused at school, they could end up being a sociopath. Because horror movies.

6. Isaac Chroner From Children Of The Corn

Chroner's a pretty chill guy. He just has one rule: no over 18s. Which is to say that he's plotting a mass-slaughter of all the adults in his town along with his fellow kids. IMO, this is a singularly excellent creepy child example, because it takes that defining aspect of being a child (having no sense of time, feeling like you'll be a kid forever) and makes it Chroner's dominant characteristic.

7. Samara From The Ring

What would a list of creepy horror movie kids be without Samara? The long haired, long dead ghoul who clambers out of TV screens to murder whoever has just watched her video tape is so much scarier because she's a little girl.

8. Regan MacNeil From The Exorcist

When 12-year-old Regan MacNeil gets possessed by the devil, she's not just creepy, she's so unruly. This isn't just a spine-chilling tale, but could also be perceived as a metaphor for parenting a kid going through the throes of puberty (the cussing seems about right). This could be you in 12 years.

When Creed's dad decides to bury the corpse of his son in a creepy pet cemetery that seems to have magical powers, Creed comes back to life. But he's not exactly the son his father remembered; instead, he's a murderous scalpel wielding psychopath. Just. Don't. Have. Kids.

Spoiler: she's a vampire. She's a freakin' child vampire who uses her cute to get adults to stop and help her and then she sucks them dry of blood. A fun reminder that you shouldn't talk to strangers, not even pre-pubescent ones.

11. Barto From The Unborn

OK, so this film about dybbuks and hallucinations is pretty B-movie silly, but the demonic children in it are freaking terrifying. For reals.

Like a 2008, British version of The Children Of The Corn, after a mysterious infection, the kids in this movie go from seemingly normal and obedient to murderous over the course of the film.

Played by adorable Drew Barrymore as a child, you'll start the film guffawing at the prospect of finding McGee creepy. But, yeah, she has the power of pyrokinesis and that makes parenting "challenging."

A reminder that, even if you have a nice kid, they could still have that most horror movie kid-esque of qualities: acting as a human magnet for all kinds of creepy supernatural stuff around you. So it is with poor Freeling, who communicates with demons through the TV.

15. Nora Carveth's Kids In The Brood

When Dr. Raglan uses his bold new method of psychic pain to create physical effect (psychoplasmics) on the already pretty messed-up Nora Carveth, she conceives a brood of tiny childlike things who go on to murder her grandmother.

While it turns out that the ultra creepy Alice isn't the homicidal maniac everyone thinks she is, she's still incredibly sinister — let's be real, you wouldn't even suspect she was capable of murdering her sister unless she gave off some pretty weird vibes. Which she does.

If you're a stronger human than I, then here's to enjoying some Halloween couple time filled with menacing horror movie vibes, but blissfully free of the menace of your lady clock. Or maybe these all just make you want kids even more. I don't know your life, but I respect your choices.

More like this
These 25 International Horror Movies On Netflix Prove Fear Is A Universal Language
By Bustle Editors
12 ’90s Movie References You Missed In 'Do Revenge'
By Radhika Menon
What’s New On Netflix: Ana De Armas’ 'Blonde' & A Nick Kroll Special
By Arya Roshanian
What Reporting On The UK’s Most Prolific Cyber Stalker Taught Me
By Sirin Kale
Get Even More From Bustle — Sign Up For The Newsletter