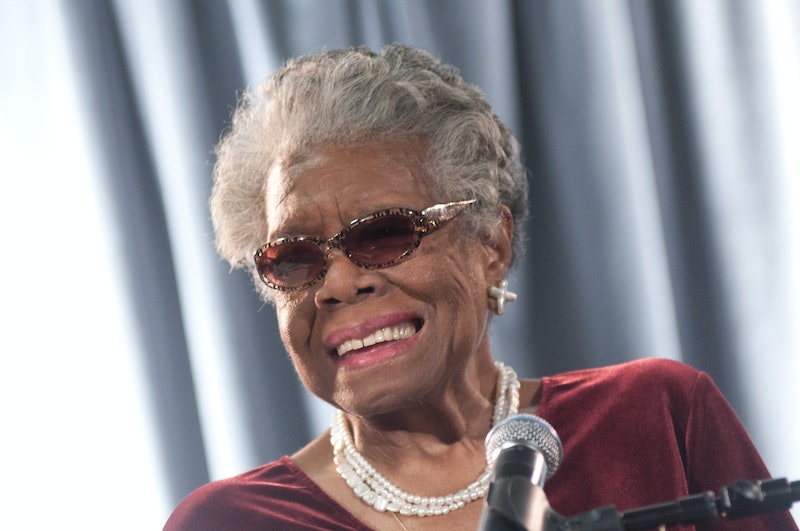 Stock up on tissues now, folks. The Maya Angelou documentary trailer is finally here! This short preview of the new film will give you all the feels, even though it's less than three minutes long.

We're still several weeks away from the theatrical release of Maya Angelou: And Still I Rise, but, if the trailer is any indication, it's sure to be a powerful experience. The Maya Angelou documentary was largely created by the poet's friends and associates, and features interviews from those who knew her, including Oprah Winfrey, Bill and Hillary Clinton, Cecily Tyson, Common, and Angelou's son, Guy Johnson. Maya Angelou: And Still I Rise also includes archival footage of the I Know Why the Caged Bird Sings author.

Check out the Maya Angelou documentary trailer above and share your thoughts with me on Twitter! You can see Maya Angelou: And Still I Rise in theaters on Oct. 14.

More like this
Romance Authors Are Mobilizing For Reproductive Rights
By Natalia Perez-Gonzalez
Alan Rickman's Diary Reveals Why He Considered Leaving 'Harry Potter'
By Darshita Goyal
'Firefly Lane' Season 2 Will Be The Show's Last — But There's A Twist
By K.W. Colyard and Grace Wehniainen
Watch The Thrilling Teaser Trailer Of 'Shadow And Bone' Season 2
By Gretchen Smail, Jack Irvin and Sophie McEvoy
Get Even More From Bustle — Sign Up For The Newsletter