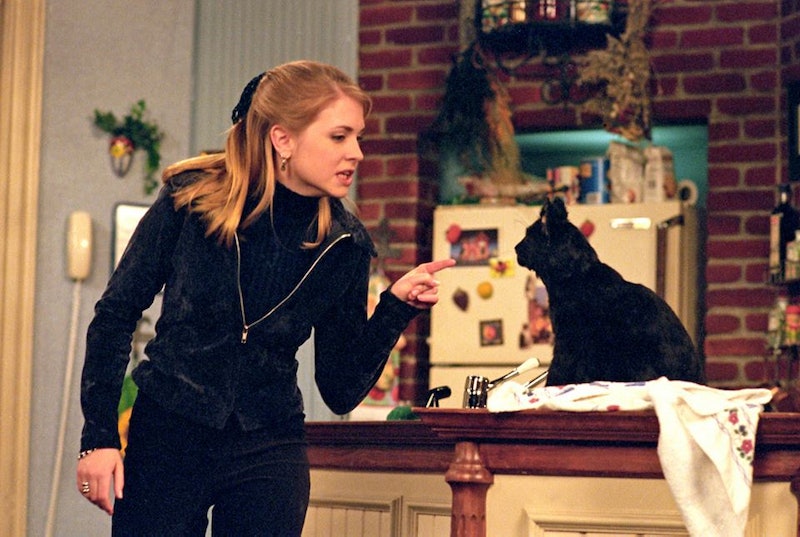 On Buffy The Vampire Slayer, Anya was the greatest demon, thanks to her blunt (and often humorous) honesty, her love for Xander, and her quirky fear of bunnies. If you recall, she even sang about her aversion to the fluffy ones during the musical episode. But it's another '90s show, Sabrina The Teenage Witch, that may explain the origins of Anya's fear of bunnies on Buffy. On the surface these shows may not seem to have much in common, but they have similar supernatural history of bunnies.

In the first episode, Aunt Hilda mentions to Sabrina, "For two months, a bunny ruled all of England causing the Witches Council to turn back time." And as Hilda and Zelda explained, the Witches Council only turn back time in the most extreme of cases, so that bunny must have wrecked havoc on merry old England. Of course, Sabrina never knew this, but Hilda and Zelda most likely lived it — remember that the witches/aunts have been alive for hundreds of years, just like Anya. Perhaps the Buffy demon-turned-human has full-on leporiphobia (fear of bunnies) due to those years of rabbit-reigning terror in the UK.

While most people are enamored with the cute little balls of fur, Anya thinks they are super scary. She dresses up as a fuzzy bunny for Halloween, thinking it'll scare everyone — instead of being totally cute. During the musical episode "Once More, With Feeling," she even dedicates a song to the creatures she despises.

Here are her feelings about bunnies in her own words, in the lyrics to the song "I've Got A Theory."

They've got them hoppy legs and twitchy little noses.

And what's with all the carrots?

What do they need such good eyesight for anyway?

Bunnies, bunnies it must be bunnies!

Anya isn't alone in her bunny fear, though. In Arabic poetry, there is a mythical yellow rabbit beast called Al-Miraj with a horn on its forehead, which it uses to kill its prey, according to Humon Comics. The only known entity who can calm and defeat this wild and deadly creature is a witch, says Humon Comics. Very interesting and totally in-line with the Sabrina The Teenage Witch history, where witches took down the reign of King Bunny.

In Chinese Astrology, Tarot.com, describes people who are born in the Year of the Rabbit to possess some deceptive bunny-like qualities. "You may think you know a Rabbit, but it's very hard to find out how they really feel, as they are so discreet about their true thoughts and feelings," Marie Diamond wrote on the mystical site.

And it seems that pop culture has also developed a certain fear of those cute long ears and puffy little cottontail. Cult hit movie Donny Darko features the creepy Frank the Bunny. Classic comedy Monty Python and the Holy Grail contains a Killer Bunny. Most recently, The Secret Life of Pets showed a Kevin Hart-voiced bunny named Snowball, a human-hating head of a sewer pet gang.

So even though bunnies look super cuddly and cute, pop culture definitely wants audiences to look beyond the adorableness — because maybe it's a cover for something more sinister.