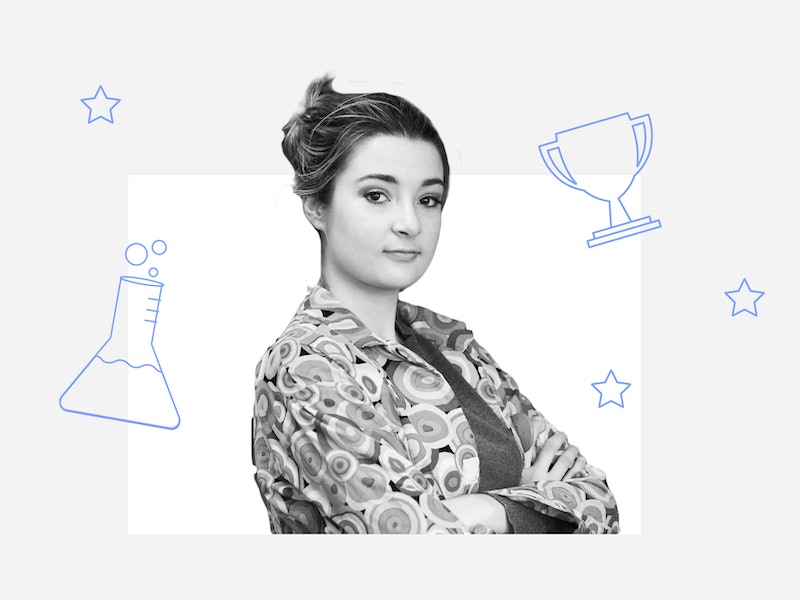 We all know the "scientist" image: an older guy in a white lab coat and plain goggles, peering into a microscope in a lab populated by people who look just like him. It's a trope that's been around for ages, but it might not last for much longer, thanks to Olivia Pavco-Giaccia. The Yale graduate and 2016 Bustle Upstart Awards honoree is the CEO and founder of LabCandy, a company whose mission is to encourage young girls to get involved in science. Launched in 2013, the Kickstarter-funded LabCandy sells colorful lab coats, sparkly goggles, and female-driven storybooks to girls between kindergarten and third grade, all in the name of getting them enthusiastic — and knowledgeable — about science. And it's all the brainchild of Pavco-Giaccia, who worked throughout high school and college to make LabCandy a reality and get accessible, fun science equipment and projects into the hands of the next generation.

"I think we have the potential to really help young girls see themselves as scientists in the way that I couldn’t ever have before," Pavco-Giaccia tells Bustle. She may have only graduated college in May, but already, she's taking the STEM world by storm. Named one of Glamour's Top 10 College Women in 2015, Pavco-Giaccia has spent the last few years expanding LabCandy from a company that solely sold colorful lab coats to one that publishes award-winning storybooks and sends bedazzled goggles to girls across the globe. Her journey so far has been pretty incredible — and here, Pavco-Giaccia explains how it happened.

Mentors Made All The Difference

Growing up, Pavco-Giaccia never considered herself "a science kid," she says. But thanks to a female middle school teacher who encouraged her to get involved in the field, she began to think of science as "not something that you find in a textbook or in a lab — it’s all around us, it’s the whole world." From then on, "I was hooked," she says. A few years later, a female high school advisor encouraged Pavco-Giaccia to do independent research and take additional classes. So she began working in a lab at Stanford University, where she manned a science-focused blog aimed at young girls because, she says, "It became very quickly apparent to me that... not enough girls were into this kind of stuff."

Even later, once LabCandy was off the ground and successful, when Pavco-Giaccia looked around for people her age to lean on, she realized how few women were in the STEM field, and how important it was to have female peers.

"I had great friends and a great support system, but they weren’t doing the same thing," she says. "For me, mentors were the ones who stepped in and supported me and gave me the confidence to pursue those goals."

While writing on the blog one day, Pavco-Giaccia decided to post a photo of some sparkly lab goggles, just for the fun of it. She didn't think anything of it until the next day, when she logged in and was "flooded with comments from little girls all over the country asking me where I had gotten these goggles, how they could make them, if there’s a place they could buy them." Unknowingly, she says, she had "stumbled across something that had resonated with young girls."

Yet while she was excited about the reaction the photo had received and the potential it had, college applications and the stress of senior year kept her too busy to pursue the idea any further.

An Entrepreneurship Program Gave Her Support

While at Yale for college, Pavco-Giaccia noticed a flier for the Yale Entrepreneurial Institute, a university department that helps participants turn business ideas into investable startups. She thought back to the photo of the sparkly goggles and decided to apply for the institute. She thought she'd perhaps be given enough money to fulfill all of the requests she had received after her blog post, nd yet when she applied, she got more than she bargained for — in the best way possible. Impressed by her idea, and despite her inexperience ("I had no idea what equity even was, I was so in over my head," she says now, laughing at the memory) the institute awarded her a fellowship that allowed her to create the products and build a company. She was their youngest-ever fellow.

The Need For LabCandy Became Evident

Although being the youngest fellow in the program (and one of the only women) was nerve-wracking at first, Pavco-Giaccia stayed inspired by realizing how much of a need there was for a company like LabCandy.

"I talked to hundreds of girls, parents, teachers, and scientists, and I realized what I was making wasn’t just goggles," she says. "What I was really building were these characters who the goggles belonged to, these characters that young girls could relate to. When I figured that out was kind of an 'aha!' moment for me."

She expanded LabCandy's products to include not just the goggles, but lab coats and storybooks featuring young female characters going on adventures and solving problems using science. She pitched the final idea to the institute, and it tied for first place.

A Company Was Formed

Funding LabCandy and providing the materials proved a challenge, so Pavco-Giaccia turned to Kickstarter — where her goal of raising $20,000 over 30 days was completed in three days. The company took off, and today, LabCandy's science kit is shipped across the globe, with Pavco-Giaccia at the helm of it all.

"My favorite part of it now that I’ve graduated from school is that I get to spend more time talking to the girls who I’m making these things for, and it’s so rewarding," she says. "I hang out with them, figure what it is about the characters they like, what it is that makes science feel relatable or not… it’s been a really incredible experience, and I’m excited about the work that we’re doing."

The Impact Is Already Visible

Thanks to Pavco-Giaccia, young girls like Ava can be scientists in the making and experience a future in which they're not, finally, the only women in the room.