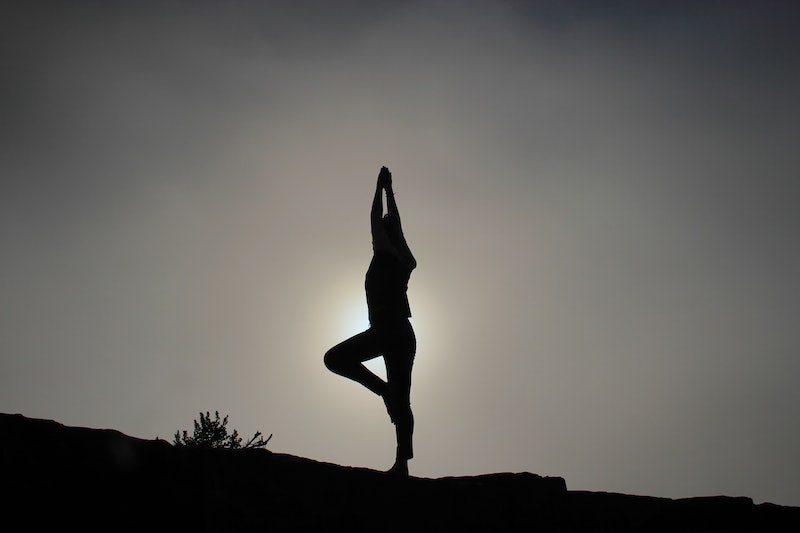 After an hour of bending yourself into increasingly pretzel-like positions, it certainly feels like yoga is exercise, but researchers disagree. According to a review of existing research published in the American College of Sports Medicine's flagship journal, Medicine & Science in Sports & Exercise, hatha yoga may not count as moderate physical activity. But that doesn't mean yoga is totally useless; it's been associated with all kinds of health benefits — not to mention all the potential Instagrams. (Is it cliche to do dancer's pose on top of a mountain? Yes. Does that change the fact that it still looks awesome? Heck no.)

The review analyzed data from 17 prior studies evaluating the energy cost and intensity of yoga, and the results are bad news for anyone who relies on yoga as their primary source of exercise. According to the analysis, yoga poses and full yoga sessions range from light to moderate aerobic intensity — the majority being light. There was one notable exception: Surya Namaskar, or sun salutations, was classified as moderate-to-vigorous activity. Any form of exercise is better than than none at all, of course, but the review points out that the American Heart Association (AHA) recommends at least 30 minutes of moderate physical activity, most days a week.

This isn't the first time yoga's intensity has come under scrutiny. A 2007 study found similar results, suggesting that most yoga poses are categorized as light intensity. This isn't to say that yoga can't count as moderate exercise; the intensity depends on which poses you're performing. Lead author D. Enette Larson-Meyer wrote in the review, "A few sequences/poses, including Surya Namaskar, meet the criteria for moderate- to vigorous-intensity activity. In accordance with the ACSM/AHA guidelines, [these sequences]... can be accumulated throughout the day and count toward daily recommendations for moderate- or vigorous-intensity physical activity."

The AHA notes on its website that although it typically doesn't count as moderate aerobic exercise, yoga can still improve your heart health. Furthermore, yoga has been shown to have numerous other benefits, including reducing lower back pain, easing anxiety and stress, and (unsurprisingly) improving flexibility. It may not be as high energy as high-intensity forms of exercise like CrossFit or whatever variety of boot camp is en vogue, but yoga is still good for you — just think about throwing in some cardio a few times a week, no matter how much you hate it. Your heart will thank you later.