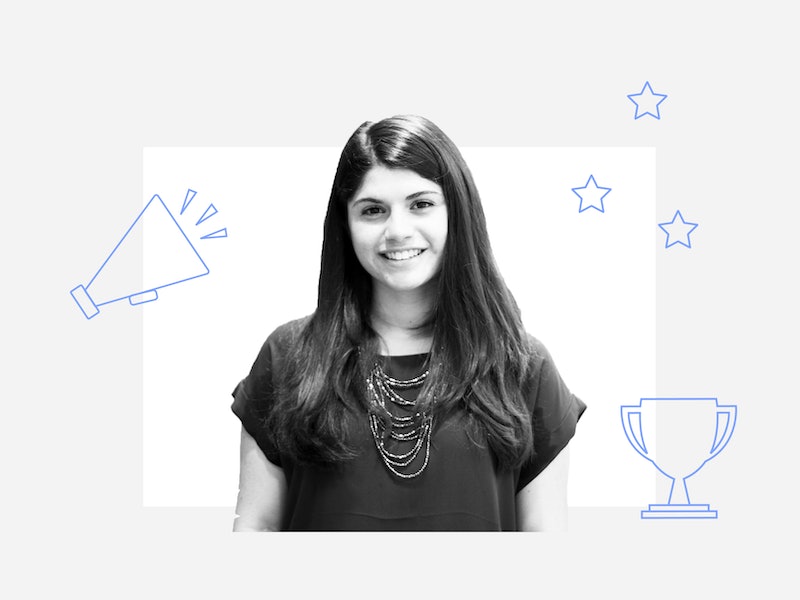 For better and for worse, Hillary Clinton's presidential bid has encapsulated what it's like to be an ambitious woman in the public eye. As many have noted, the criticism surrounding Clinton's candidacy has reached far beyond "the issues." When the former Secretary of State isn't fielding questions about whether she's "qualified," she's critiqued for her appearance, the sound of her voice, her personal life, her perceived "stamina."

Regina Monge, a recent graduate of American University and 2016 Upstart Awards honoree, is well-acquainted with this sort of noise. Not only has Monge worked to promote female and Latinx representation in politics, but she ran for political office while still in college (and won). Now, as the state and local campaigns assistant for EMILY's List, a PAC that aims to elect pro-choice Democratic female candidates, she continues her advocacy for equal representation in government.

She recently spoke with Bustle about how women in politics experience, and internalize, the perception that they just aren't ready.

"Women face greater barriers to entry into the political realm," says Monge in a phone interview. "They are criticized for things that male candidates never, ever get called out on." As a result, they seldom run for office.

Whether you plan on running for president in 2032 (woo-hoo!) or simply want to move up the ladder at work, there are some important lessons here: about how affirming it can be to put your beliefs and passions to work, and about how you should never mistake your ambition for arrogance. Here are six things you can learn from women who work in politics.

1. Your Qualifications Will Be Questioned

When Regina Monge ran for her district's Advisory Neighborhood Commission (a D.C.-specific form of local government) she was faced with skepticism.

"When I told [another commissioner] I was campaigning, he said, 'Oh, that's cute,'" she recalls. The commissioner was running for the same position, but in another district.

"That's something that pissed me off for a long time," she continues. "Yes, I'm younger, which is a layer. But also, I'm a woman. I think when younger elected officials who are male run — yes, their qualifications are questioned in that way. But they would never be called 'cute' or minimized like that."

Nevertheless, after spending a whopping $58 on her campaign, she won a seat on the commission and served her district for nearly a year. Throughout her tenure, she advocated for D.C.'s student population and spurred community members to get involved in issues of safety on campus, including sexual assault-related concerns.

2. You Might Have To Work Twice As Hard For Financial (And Political) Support

EMILY's List, where Monge has worked since August, contains an acronym: "Early Money Is Like Yeast." And yeast, as EMILY's List founder and chair Ellen Malcolm once explained, "makes the dough rise." (Get it?) The idea is that early fundraising can help establish female politicians as viable candidates.

"EMILY's List helps women who otherwise wouldn't be able to run" due to lack of financial support, says Monge. "It gives them the confidence to run and invest in themselves and their campaign."

Before even getting to the fundraising stage, women face many barriers for entry into politics: according to a 2013 report from American University (Monge's alma mater), women are not only less socialized to think about politics as a career, but they are less likely to be asked to run than men are. They are also less likely to see themselves as qualified compared to their male counterparts.

3. You'll Be Forced To Overcome Your Insecurities

This is all to say: running for office is a surefire way to make you reckon with your sense of self-worth. Monge's mentors, former colleagues, and friends all stepped up to support her candidacy, but she admits that it wasn't easy.

"Asking people to vote for me was uncomfortable," she wrote after being elected. "Part of that was the fact that I didn't have any prior experience, but I couldn't ignore the gendered nature of my discomfort. I felt arrogant asking for the support of my friends, people who didn't question my intentions and were excited for me. I felt I had to justify my desire to run even though I wasn't being challenged."

While mulling her candidacy, Monge was working for Running Start, a non-partisan nonprofit that encourages women to run for office. So despite her misgivings, she pushed herself to turn advocacy into action.

"The fact that I could be seen as a legitimate candidate was something I was hoping for," she says. "But it also surprised me."

If, like Monge, you're the first in your family or in your social circle to run for political office — or really, approach any field in which you're underrepresented — it's hard to figure out where you fit in. Which leads us to the next point...

4. You'll Learn That Networking Can Be Empowering (& Not Scary)

"Networking" might feel intimidating (and honestly, boring), but Monge found a way to leverage volunteer opportunities and personal connections into big opportunities.

While running for office, Monge met Nicole Castillo, who interviewed her for an article. Castillo had co-founded an organization called BeVisible, an online platform that connects Latinx millennials with other professionals and job opportunities. She invited Monge to contribute as a writer and member of their "millennial advisory board." They've kept in touch; Castillo has provided her with valuable mentorship, and Monge serves on the board of BeVisible to this day.

The key here? Castillo and Monge both provided value for one another, and Monge also seized the opportunity to pay it forward. As a young Latinx woman, she stressed the importance of building this network for future generations who have found herself in her position.

Monge says: "When people give career advice, people say, Tap into your network. See if there's anyone that can give you career advice. And while Latinx have huge, extensive networks that provide social capital in many ways, a lot of times — for first-generation students or students that are approaching fields in which Latinx are underrepresented — it's harder to find mentors that actually understand what it's like to grow up how you did, or in a family similar to yours."

"OK," you might be thinking. "How do I actually get involved? How do I actually do this 'networking' thing?" Monge's answer is simple: volunteer. You might notice that she created numerous opportunities by seizing unpaid roles, from her stint as an elected official to her internships.

"Volunteering helped me meet the people I needed to know in order to get my internship," she says. "One of my first political jobs was an internship that dealt with training young women to run for office." At the time, she listed volunteering at an after-school program for young women on her resume.

"That easily could have been written off as doing 'after care,'" she continues, but she stresses that you should never minimize your volunteering experience.

6. You'll Learn That Visibility Is Everything

Today, only 19.4 percent of the U.S. legislature is female, and a mere 6 percent are women of color, despite the latter group comprising 20 percent of our population.

Though Regina Monge is working behind the scenes to change those numbers, I had to ask: would she ever run for office again?

"I would," she says. "I would love to work [at EMILY's List] for as long as I can, but I'm definitely still figuring out what I want to do. In the long term, I do want to run for office."

Well, you heard it here first.