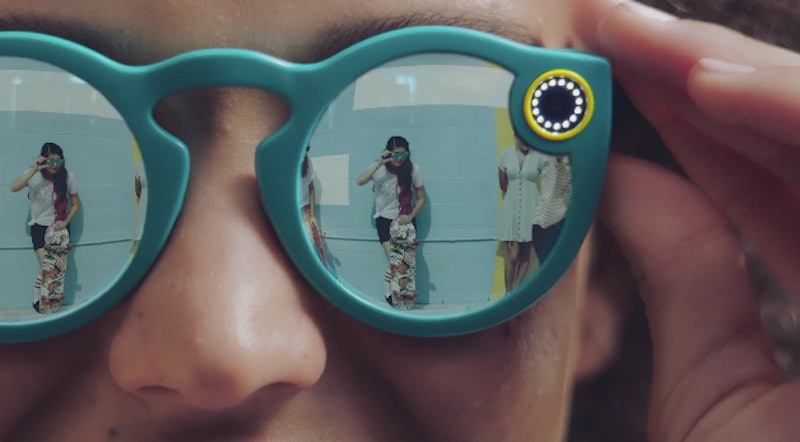 As is always the case when a snazzy new piece of technology makes its debut, questions begin flying almost as soon as the announcement lands. Such is the case with Snapchat Spectacles —we all started asking ourselves everything from where we can get Snapchat Spectacles to what exactly they are in the first place pretty much immediately after the Sept. 24 blog post introducing the forthcoming accessory hit the internet. The answers to all those questions are trickling in slowly, so for the curious, here's what we know so far.

Snapchat Spectacles are a wearable device akin to Google Glass. The colorful, high-tech sunglasses come equipped with snazzy little video cameras, which will apparently make it that much easier to create Snapchat Memories. According to Snap Inc., a limited supply of Spectacles will be available for purchase in the United States later in the fall; they’ll cost $130 a pair. As far as where we’ll be able to get them, though? Snap Inc. is keeping the details under wraps for now. This post will be updated when the information finally arrives, though, so stay tuned.

Some may be wondering exactly why we might need a $130 device just to create short videos meant for social media — and sure, when you put it like that, it sounds a little silly. But there’s a bigger picture here, too. Consider, for example, the fact that people are now shooting feature-length films on Snapchat and think about what Spectacles might do for this up-and-coming filmmaking technique. Although Google Glass has gone back into hiding for the time being, some of the most creative uses we saw of it during its initial incarnation involved filmmaking and other artistic endeavors; if Snapchat Spectacles continue the work that Google Glass started, it'll contribute to a growing body of evidence that thinking outside the box has huge implications for the application of this sort of technology. Furthermore, Snap Inc.’s recent rebranding terms itself a “camera company,” not a social media company, which suggests it might be positioning itself for more gadget-related releases later on.

But even though we still don’t know exactly where we can get Snapchat Spectacles yet, we can actually make a few reasonably educated guesses. Here are some possible places we might be able to get the device once it finally drops:

At the end of the day, Snap Inc. is a brand like any other, which means that there’s a good chance a branded store will emerge as a place to buy Snap Inc. gear. Think the Apple Store, only for Snapchat-related items.

It’s true that Snap Inc. is a little bit of an unusual case here; after all, social media companies aren’t really known for having their own branded stores that sell physical items. Facebook, Twitter, Instagram — none of them really sell gear. But Snapchat is in the process of making the transition from being a social media company to being a “camera company,” as their new homepage describes it — which means that Spectacles might just be the first in many planned projects that will lift the brand off your phone screen and launch it into other arenas.

After all, we’ve seen this kind of thing before, notably in Google — what was once merely a search engine is now a technological juggernaut, with its own store selling everything from Google Cardboard to Chromebooks.

Think Best Buy, Amazon, or any other place you might typically get electronics. This is pure speculation on my part, but I suspect it’s likely that Snapchat Spectacles will debut in a Snap Inc.-specific store first before becoming available at other retailers later on. Remember what a big deal it was when Best Buy became the first independent retailer to sell iPhones?

Everything ends up on eBay eventually — and often sooner rather than later. The question is always whether or not you’re willing to pay the absurd markup many sellers peg to limited-edition items.