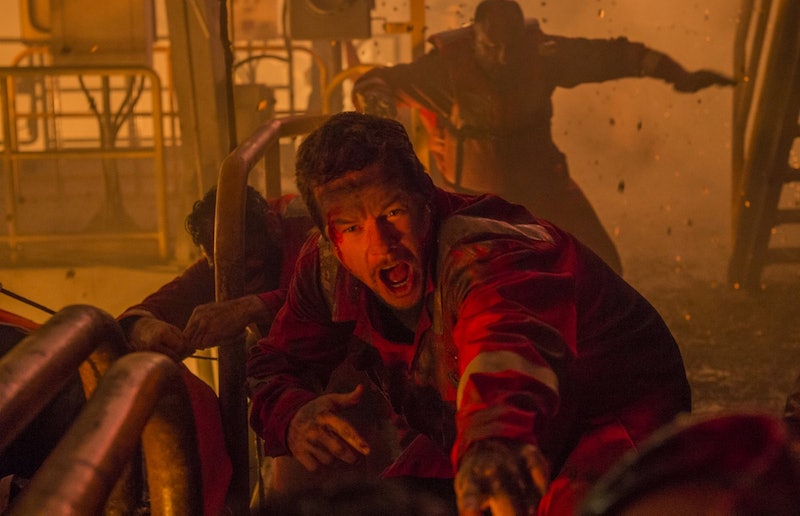 It's always tricky, when writing a movie based on true events, to balance between writing something compelling and sticking as close to the truth as possible. Often with films based on true stories, there are some liberties that are taken for the sake of the "entertainment" factor of the movie. At some point, we all have to acquiesce and accept that more often than not, movies are not completely accurate depictions of real life events. And with the new movie Deepwater Horizon, audiences are fully aware that it's not completely factual, even if it does stay close to the truth. But just how accurate is Deepwater Horizion?

Deepwater Horizon is based on the 2010 drilling rig explosion in the Gulf of Mexico, which caused the deaths of 11 people and became the worst environmental disaster in history. Mark Wahlberg plays the film's protagonist, and real life survivor, Mike Williams. Essentially, the film chronicles the events leading to the explosion of the rig — Deepwater Horizion — and the survival of Williams and others aboard the rig after the explosion. Of course, real life accounts of what happened that day are cloudy, and there's a definitive gray area between who made the errors and why the explosion happened, but does the film adhere to the real life events or does it take some liberties?

According to USA Today, the film diverges from public record in some ways. The film doesn't go into detail about the fact that BP — the company who leased the rig from Transocean — was convicted of manslaughter and environmental felonies and had to pay a $4 billion fine after the explosion. Instead, John Malkovich's character, the real life BP employee Don Vidrine, is used as the primary antagonist. USAToday also reports that the film doesn't put too much focus on any errors possibly made by the Deepwater Horizon crew members. Other things depicted in the movie, including some relationships, phone calls, and friendships, also most likely never occurred, according to USA Today.

But that's no reason to be disappointed. I understand wanting a film to be exactly how events happened in real life, but that's what a documentary is for. Yes, Deepwater Horizon seems to take some liberties, but that's what narrative movies based on true stories so often do in order to be as compelling as possible.