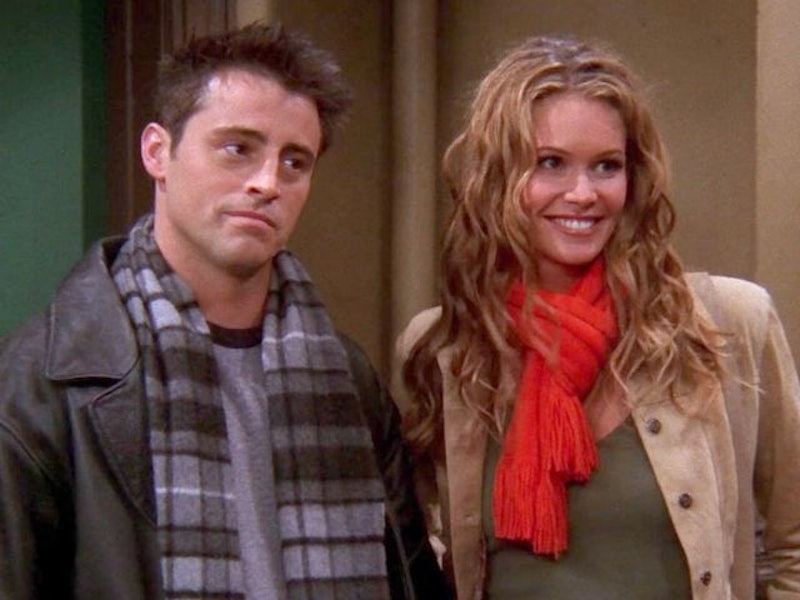 If you were never a huge fan of the short-lived Joey dates his roommate Janine subplot, you're not alone. Apparently Elle MacPherson regrets her guest spot on Friends, as the longevity of the series has kept her as Janine LeCroix indefinitely. In an interview with Australia's TVWeek she admitted, "If I'd known how important it was in the U.S., or how long it would be on TV, I may not have chosen to do it," and revealed that she was offered to film more episodes but chose to pass since she was living in the U.K. And it makes the mind boggle... what would've happened if the Janine story arc went on a little longer?

Well, if you retrace that brief plotline you'll remember that the deal breaker between Joey and Janine was the fact that Janine didn't like Monica and Chandler. The verdict was that Monica was too loud, and Chandler? Too "blah." Suffice to say, lovers getting in between friends seemed to be a running theme on this show (remember how Kathy nearly ruined the Chandler-Joey bromance?) so it isn't too crazy to think of an alternate universe where Joey could've isolated himself from the couple to save his own relationship. But such a plot could only extend another two or three episodes max before it could truly boil over, right?

An alternate theory is that Friends could've scrapped that plot out entirely (as it was clearly written to be MacPherson's exit out of the show) and had the relationship develop naturally for the next few episodes. Now, the timing of the Janine-Joey arc is intriguing because it occurred in the midst of season six, long before the end of the series and long before Joey fell for another roommate... Rachel. Now, I hold no delusions that MacPherson would've lasted four straight seasons. However, if Janine could've proven herself to be a good fit for Joey, and MacPherson had a willingness to return to the show, maybe she could've swung by a later season as Joey's endgame. Perhaps that would've botched the Rachel-Ross-Joey love triangle before it even started. It sure as hell would've botched the short-lived Joey spin-off (for better or for worse).

Of course, this is all heavy "maybe" territory. Most likely what would've happened is post-break-up we would've gotten the expected "problems when you're stuck living with your ex" episode. Seriously, I've seen the fall out between lovers who live together and it is a sticky web of real estate battles, mixed feelings, and the awkwardness of whether you can bring someone home or not (hint: it's not a wise idea).

Anyway, while MacPherson's arc on Friends remain contained to those five episodes, her reputation and legacy as Janine has apparent staying power through reruns. "[My son and his friends] know me as Janine LeCroix and they are always like, 'Oh you know, Cy's [mom] she is on Friends. They haven't figured out it was nearly 20 years ago, they still think I am on 'Friends,'" MacPherson said. Bless.

More like this
24 Years Ago, 'Friends' Dropped Its Most Underrated Ross & Rachel Episode
By Grace Wehniainen
The Best 'Grey's Anatomy' Intern Moments, From MAGIC to Glasses
By Grace Wehniainen
Netflix Reveals First Look At Wednesday In The 'Addams Family' Spinoff Series
By Bustle Editors
A New Scooby-Doo Movie Confirmed Velma Is Gay & Twitter Is Pumped
By Radhika Menon
Get Even More From Bustle — Sign Up For The Newsletter