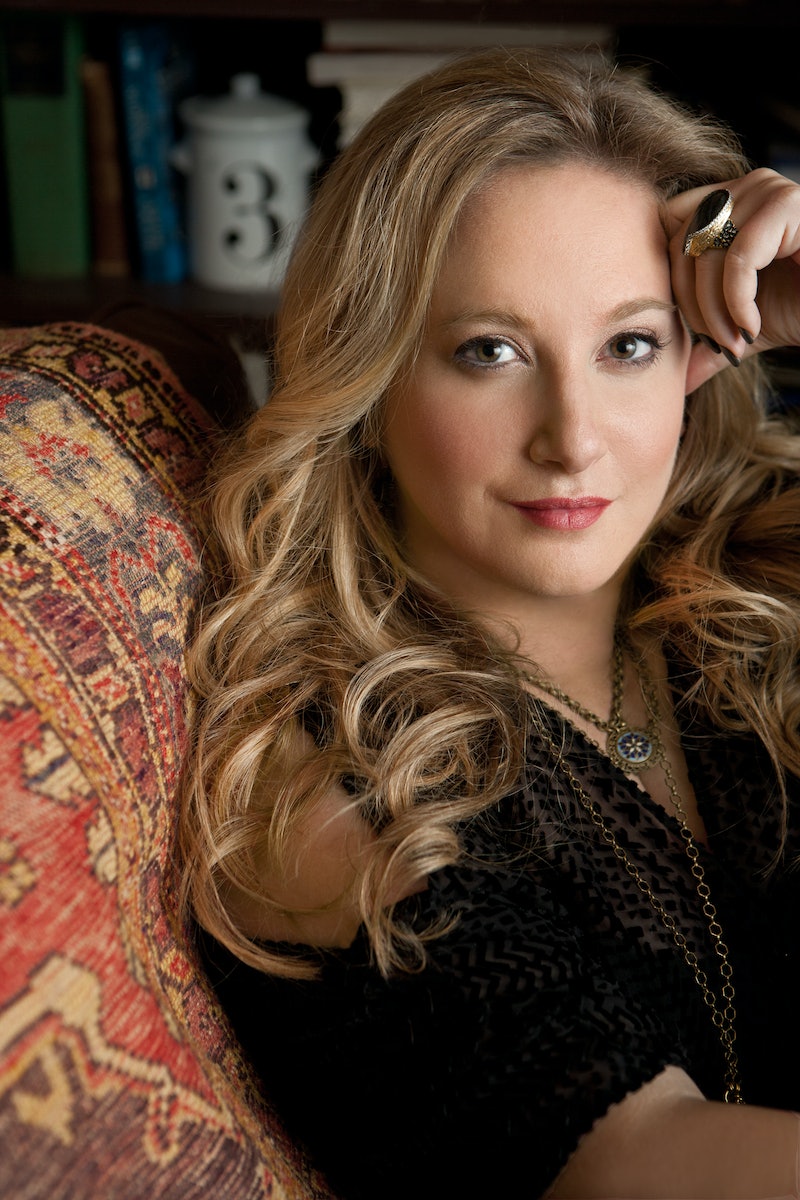 No mourners, no funerals: the second and final installment in the Six of Crows series, Crooked Kingdom, is here, but don't start crying for Kaz and crew just yet. In true Ketterdam fashion, this goodbye isn't a sentimental one, but an explosive one — marked by sharp-shooting, tight-rope-walking, knive-throwing, and more than a few near-death experiences. But then, did we expect any differently from #1 New York Times bestselling author Leigh Bardugo?

"The 'goodbye' didn't really hit me until a few weeks ago," Bardugo tells Bustle. "I was scrolling through the Tumblr tag, and there were these beautiful Crooked Kingdom countdown posts readers had created. Suddenly, I realized it was all going to be over, and I got all choked up. I'm a stone cold sap."

Bardugo first introduced readers to the world of the Grisha — a selective group of magical people — in her 2012 novel Shadow and Bone, the first installment of The Grisha trilogy. The Six of Crows series takes place shortly after the events of the original series, but with a different set of characters and in a different city.

In Six of Crows, readers first met our main characters: six youth on the fringes of society in Ketterdam, a bustling metropolis where the poor suffer and the rich get richer at their expense. The only thing standing between the suffering and the elite? The unrepentant criminals, like Kaz Brekker. No one knows the city better than he does; no one can pick a lock faster; no one can plan a heist like him. So when one of the city's richest men presents him with the opportunity of a lifetime, Kaz can't say no. But he needs help — so he enlists Inej, a talented spy known as the Wraith; Nina, a Heartrender who uses her magic to survive the streets of the city; Matthias, an exile who doesn't look kindly upon Kaz and his ilk; Jesper, a sharpshooter who doesn't know how to channel his magic; and Wylan, a runaway with no clue how to survive on the streets. The six tentative allies embark on the adventure of a lifetime — and along the way they discover the object of their pursuit has the power to change humanity as they know it.

Six of Crows ended with one dramatic cliffhanger, and Crooked Kingdom picks up right where it left off. But don't expect another heist novel: this book is about more than one goal; there's more than one villain, more than one mission, and more than one character in search of redemption, revenge, and power.

I spoke to Leigh Bardugo about Crooked Kingdom, writing diverse books, and what she's working on next. Here are five things I learned:

1. She Told The Story From Multiple Perspectives For A Very Important Reason

The Grisha Trilogy was told from the perspective of just one person: Alina. But Six of Crows and Crooked Kingdom have multiple narrators: Additionally, the Six of Crows series is told from third-person, a shift from Bardugo's previous work. These two decisions were essential in forming the story she wanted to tell.

"As soon as I got the idea for Six of Crows, I was imagining building it in multiple points of view," Bardugo says. "Heists are all about the reveal of information. You're keeping secrets from the reader, but you don't want it to feel cheap when you get to the big reveal. It'd definitely be possible to do it in first person, but I think it's much harder. Six Of Crows is about every member of the crew, the grudges they're holding, the way they build trust. First person wasn't the right fit."

2. When It Came To Plotting The Heist, She Turned To Film And TV For Inspiration

Bardugo says most heists share a similar structure, and she followed that outline in her own work: "Choosing the mark, building the team, making a plan, attempting the heist, and then, of course, the heist going (or at least seeming to go) to hell," she says.

She also drew inspiration from some obvious — and not-so-obvious — movies and television shows while plotting the heists and adventures of the series. "Ocean's 11 was definitely an inspiration," she admits. "But I'll also say that the season one finale of Sense8 is one of my favorite heists of all time."

3. She Plots Her Books Heavily, But She Leaves Room For The Characters To Take The Reins, Too

The characters' of Crooked Kingdom all have incredibly detailed backstories that contribute to their decisions during the series. That's intentional. Bardugo says she loosely plotted the betrayals and "emotional landmarks," but she "really found [her] way to the characters through the backstories."

"I plot my books pretty heavily," she says. "But there are always big places left open to explore. Some of the characters' pasts did take me by surprise."

4. The Diversity In This Series Is No Accident — And Bardugo Takes It Very Seriously

Leigh Bardugo has been deservedly commended for the diversity of this series: there's a male-male relationship, there's a character with a disability, there are two characters of color, and many of the characters are marginalized in the society in which the books are set. Though the world of the Grisha is fantasy, Bardugo insists that the rules still apply, though she admits writing diversity in a fantasy novel presents a different set of challenges than writing diversity in contemporary realism. "I'm tempted to say that writing diversity in our world is harder because you run a greater risk of putting forth a damaging narrative," she says. "But I also think we give fantasy too much of a pass. 'It's a fantasy world!' isn't an excuse to run roughshod over marginalized voices."

Still, she's hesitant to accept praise for the diversity in her novels. "I'm not an authority here. It’s dangerous to start thinking of yourself as one of the good guys, because we’re all carrying around biases that we often don’t see until someone calls us out on them," she says. "It’s easy to get defensive around these issues, but the alternative to facing them is some kid picking up your book and feeling hurt or diminished by what they found on the page. I don’t want to write that kind of book.

To avoid writing a book that could do harm to marginalized people, Bardugo does diligent research and turns to readers and authors she can trust to be frank with her. "I spent a lot of time on The Writing with Color Tumblr and N.K. Jemisin's blog," she says. "I try to make sure I'm reading LGBT authors and authors of colors. The truth is, I get a lot of praise for diversity, but there are far more diverse fantasy worlds out there."

5. She's Not Ready To Say Goodbye To The Grishas, But She's Focused On Wonder Woman For Now

Crooked Kingdom features a few cameos that fans of The Grisha series will be overjoyed to reunite with. Don't worry, though: this isn't a goodbye. Leigh Bardugo says readers will see more Grisha and Six of Crows characters in the future: "I can't say much about it," she says. "But the short answer is yes. I love writing this world too much to leave it behind forever."

For now, Bardugo is focused on what comes next: her YA adaptation of Wonder Woman, out in August 2017. "I'm finishing up my first round of revisions right now," she says. "Writing [Wonder Woman] has been such a happy surprise. Turns out heroes are as much fun to write as amoral murderers."

More like this
9 Must-Read New Books Out This Week
By K.W. Colyard
The 20 Best Audiobooks To Fall Asleep To
By Aoife Hanna and K.W. Colyard
Conversations With Friends' Endometriosis Scenes Are As Brutal As It Gets
By Ivana Rihter
'Bridgerton' Star Nicola Coughlan Confirms Season 3 Will Focus On Colin & Penelope
By Grace Wehniainen and Alyssa Lapid
Get Even More From Bustle — Sign Up For The Newsletter