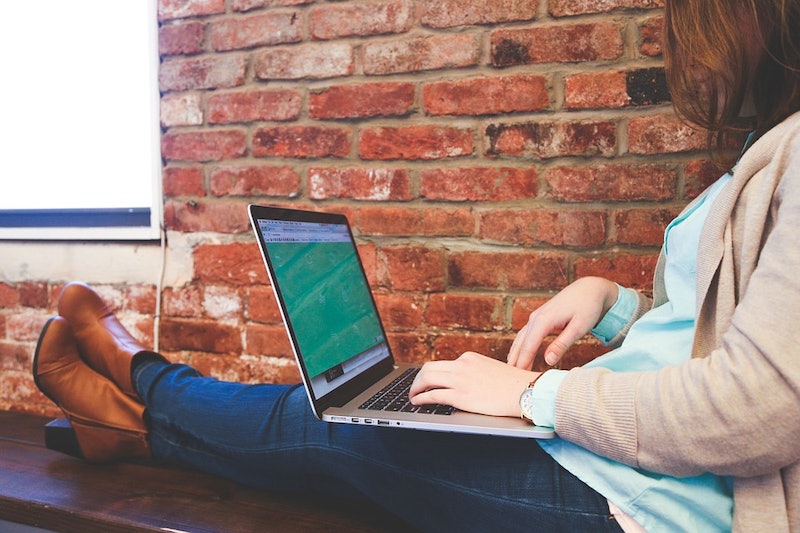 If you've been living under a rock or have recently broken up with Twitter, now's a good time to inform you that the presidential election is only six weeks away. That means it'll soon be time to get your ass to the voting booth so you can have a solid say in who will be the next President of the United States for the next four years of our lives. But before you can do that you need to make sure you're registered to vote.

America doesn't exactly have the best track record when it comes to voter turnout, as you may well know. A recent study by the Pew Research Center shows that out of the 35 top developed countries, the U.S. takes the 30th spot. Ouch. Plus, as opinionated as we are, millennials aren't known to flood the polls when the time comes for electing a new president. In 2004 and 2012, millennials actually had the lowest voter turnout rates amongst all the age groups.

Hopefully this election will be the one where young adults flock to the polls in this Clinton vs. Trump battle, though. We talk about politics enough online, and the stakes are certainly high enough. There's no better time than today, September 27, National Voter Registration Day, to join the voting force and make your voice heard loud and clear. If you've never registered before and you've been delaying the process, you'll be shocked at how simple it is.

Here are the six easiest ways to register to vote.

You can't get it any easier than this. Click on this Election Assistance Commission link and follow the simple instructions that allow you to vote at both the federal and local levels. There's also the option of registering to vote in person or by snail mail, but let's face it: Online is way easier.

All it takes is a cell phone and 90 seconds to register to vote. Text 384-387, visit hello.vote, or chat with a HelloVote bot on Facebook Messenger. When HelloVote first launched, they said in a statement, "HelloVote takes the registration process right to the voter — instead of the other way around, and may make millennials, immigrants, and communities of color the decisive game-changers in this closely contested election up and down the ballot by leveraging up-to-date technology and social media." Sounds good to us.

You're a smart, capable adult. You use Gmail. Therefore, registering to vote has never been easier. On Monday, Google's homepage doodle transformed into a one-stop-shop to registration. It leads you to a tool where you can immediately enter in your state and all your basic voter information. It's even available on mobile devices, so you can get it done on your phone or tablet.

In a positively hilarious and accurate video made by BuzzFeed, President Obama sat down and fished through five things that are way harder than registering to vote, including playing the game Operation, naming all the characters who have died on Game of Thrones, and stacking Cheerios. There's really no excuse. Visit BuzzFeed's TurboVote, where you enter in your most basic information in a short amount of time.

Since this past Friday, the mobile Facebook app has been presenting people with reminders to register to vote. On your newsfeed you'll see a colorful banner that says "Vote Now," which takes you straight to the USA.gov site so you can register yourself. Then you can choose to update your status and let everyone know that you've registered, which can serve as a solid reminder for your friends to do the same.

Snapchat has partnered with TurboVote to make sure everyone over the age of 18 has the chance to vote this election season. On the Stories and Discover pages of your Snapchat app you can see TurboVote's ads, which are essentially videos of celebrities like The Rock and dreamy Jared Leto urging you to swipe up to get to the registration page. This feature is available until October 7 — and it takes less than 60 seconds to finish!

YouTube wants to "get out the vote" in whatever way they can, so they've launched a campaign called #voteIRL, which encourages people everywhere to get their asses to the polls on Election Day. Along with inspiring videos in which people demonstrate all the things they can do in the short amount of time it takes to register to vote, YouTube has made voter registration tools available on their site. Follow the links and you'll find yourself signed up in no time.

Bustle has partnered with MTV’s Elect This to spotlight the issues that matter this election cycle. To learn more about how to register tovote, go to trl.electthis.com