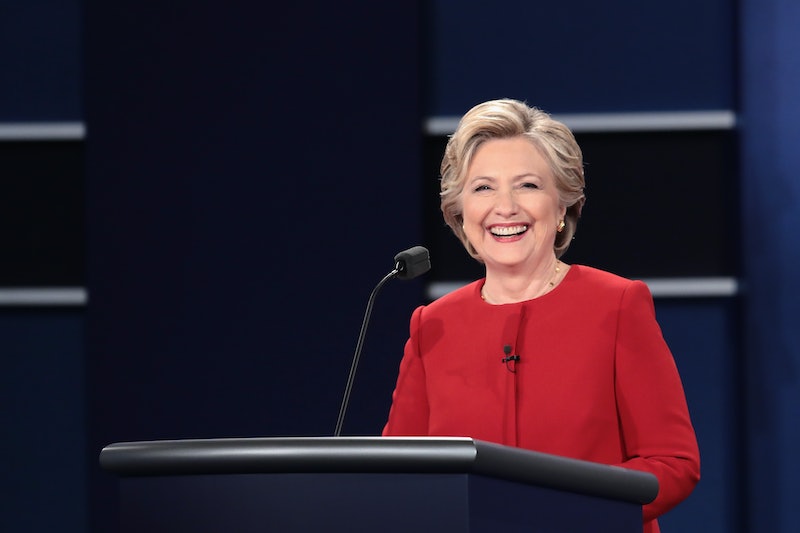 There was a lot that you could tell about the candidates during Monday night's presidential debate. The most telling, conventional wisdom might say, would be specific points about their policies and insight into the candidates' debate styles. But if the famous 1960 Kennedy-Nixon debate, which split audiences on who won depending on if they watched it on television (they largely went for JFK) or radio (who leaned toward Richard Nixon), taught us anything, it's that there is more to running for president than the actual things that you have to say. That moment in 1960, the first time that a debate was broadcast on television, was instructive during the first presidential debate of 2016, because Hillary Clinton's facial expression said a lot about the sexism and mansplaining that she's faced for years.

The debate stage, despite all the pleas from moderators, is not a kind place. Lester Holt, of the NBC Nightly News, gave his futile instructions to Clinton and Donald Trump not to talk over each other and to respect the two-minute time limit they were allotted to answer each question. OK, sure, Lester. That didn't happen, and the candidates spent a good chunk of the night trying to shout down the other.

But there was a glaring difference in the way that Clinton and Trump handled the moments in which they were ostensibly being told to shut up. As Clinton spoke, usually trying to debunk some Trump comment that has been disproved many, many times before, Trump often seemed impatient, clearly champing at the bit to seize control of the conversation again. Clinton, meanwhile, looked like this:

Don't get me wrong, Clinton didn't always hold up her end of the bargain when it came to respecting Trump's talking time. There were moments when her composure broke and that face of calm resolve gave way into crosstalk with Trump. But for the majority of the sometimes baffling rhetoric Trump offered, Clinton kept some version of that "oh-my-God-I-can't-believe-he's-saying-that-but-I-have-to-let-him-finish" face on display the entire night.

There's a good reason for that. Since seminal research on the topic emerged in 1975, the sociological phenomenon of men interrupting women has been well-documented by researchers. In internet parlance, that often is interpreted as mansplaining, or the idea that men can A.) interrupt, and then B.) tell you why, exactly, they know more about the topic than you do.

In her years of serving in public office, Clinton has been mansplained more times than many of us can even fathom. After all, the world of politics is still a male-dominated field. But Clinton's face in the moments Trump talked revealed that not only did she know how to handle it, but she knew how to counteract it.

About halfway through the debate, Trump started touting his "winning temperament" over what he perceives as Clinton's poor constitution. I don't think I need to waste much time explaining why Trump talking about his great temperament is eye-poppingly absurd (the audience actually laughed in response). But while he waxed on and on about how Clinton's nature would make her a bad leader and how he has the yugest, most amazing temperament ever known to man, Clinton remained calm, occasionally smiled, and waited her turn. When Holt finally wrestled the platform away from Trump, Clinton finally seemed to exhale.

"Whoo, OK!" she said with a little shoulder shake, before launching into a serious discussion on sanctions on Iran. Clinton's face, in other words, wasn't just her maintaining a guise of placidity while Trump gabbed about his "biggest asset." She was patiently waiting, listening to what was being said, and focusing on how to keep her message straight as an arrow.

In a business setting, some studies have shown that men speak as much as 75 percent more than women, and a lot of that has to do with interrupting, or women's fear of being interrupted. So Clinton, who has had to train herself how to operate within a man's world, has in my opinion adapted to use her time on the floor efficiently, which means balancing the ability to both listen and stay on message. Her response to Trump's temperament tirade was a perfect example.

In the two remaining presidential debates, I doubt that Trump will deliver on his fabled pivot. This is the Trump that we should expect to see throughout the remainder of the campaign, mansplaining and all. Luckily, it seems like Clinton is more than prepared to handle it.