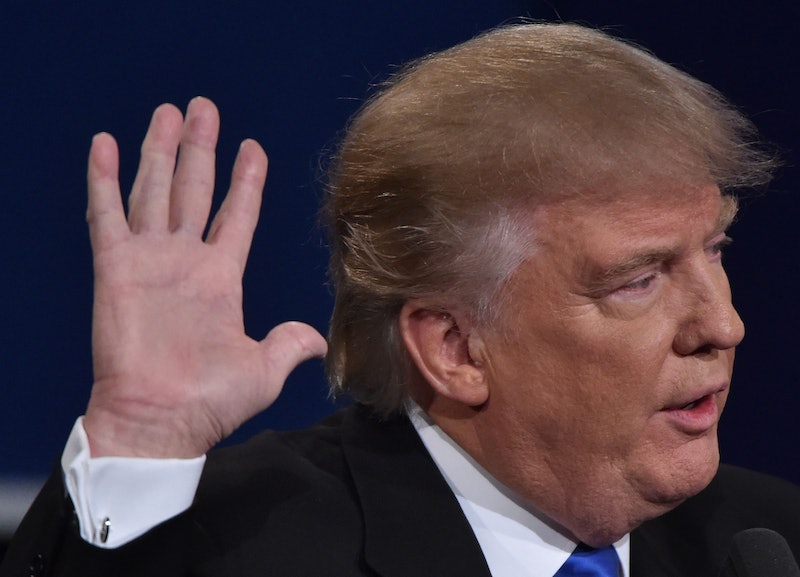 The first presidential debate Monday night was one of the biggest television events of 2016; analysts even predicted that the event would be as popular with viewers as the Super Bowl. A few of the millions of viewers, apparently, were former staffers on the Law & Order television franchise, many of whom had some harsh words for Donald Trump. Trump has repeatedly deemed himself the "law and order" candidate, and the former creative team behind Law & Order just weighed in on Trump. And they weren't amused.

Former Law & Order writer David Slack tweeted, "the only role Donald Trump could have in Law & Order is as a rich bastard suspected of killing his wife," and former Law & Order: SVU executive producer Warren Leigh called Trump a "human virus." Both Slack and Leigh spent the evening live tweeting the debate and criticizing Trump on Twitter; Slack said it looked like Hillary Clinton "was debating the comments section," and Leigh said Trump "wet himself in the ring."

The actors of Law & Order seem similarly unimpressed by Trump. Former SVU star Chris Meloni tweeted an article in January from a former McCain aide titled "We Deserve Better Than Donald Trump" that referred to Trump as a "xenophobic bigot" and openly questioned his readiness for office. He has also called Trump a "snake oil salesman." Meloni's former SVU costar Mariska Hargitay has kept quieter on the election, though during the GOP primary she once jokingly suggested that it would be better if she were leading in the polls.

For what it's worth, Trump seems to have fared better with lowercase law and order workers—Trump was endorsed by the Fraternal Order of Police earlier in September. His bad luck with the employees of the Law & Order franchise extends, however, to many other writers and actors. An open letter and petition denouncing Trump was published earlier this year by hundreds of writers, including Stephen King and Daniel Handler (better known as Lemony Snicket); and many famous actors, including Scarlett Johansson and Robert Downey Jr., recently released a video that asked viewers to "save the day" by voting against Trump.

It's certainly possible that Trump's performance on this or a future debate could change the mind of a wavering Clinton voter; but it seems certain that the "law and order" candidate won't be getting many votes from the Law & Order creative team.