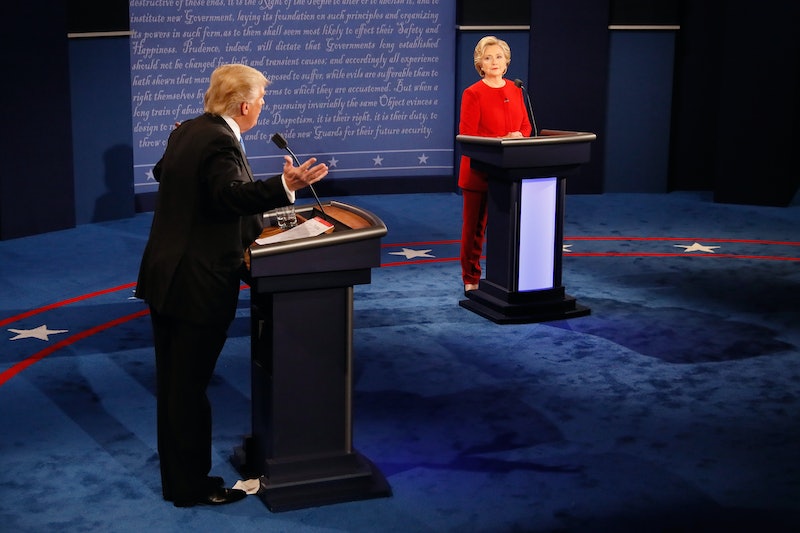 There are only three things in this life you can count on: death, taxes, and Republican presidential nominee Donald Trump interrupting Democratic presidential nominee Hillary Clinton. But just how many times did Trump interrupt Clinton during Monday night's presidential debate? The number adds up to more fingers and toes than you have (I hope?), so settle in for this whammy: Trump interrupted Clinton a total of 51 times, according to Pew Research's Senior Demographer and Associate Director Conrad Hackett. That's a whole lot of wasted minutes in a live televised debate you're not allowed to pee during.

Although your blood pressure might have been acclimating to the temperature on the roof while this happened again and again (and again), Clinton remained unsurprised and undeterred by the interruptions, continuing to talk over Trump and even calmly telling debate moderator Lester Holt to start her two minutes again after one particularly long interruption. In comparison, Clinton interrupted Trump a total of 17 times — a third of the number of times he interrupted her. Further analysis showed that Lester Holt interrupted Trump and Clinton a total of 30 and 19 times, respectively. (And to be fair, I interrupted approximately 168 times to say, "Oh my god, Twitter's going to go nuts.")

To make matters even more annoying, Trump spoke for a total of 68 percent of the debate, whereas Clinton spoke for a mere 38 percent, according to Twitter. If that statistic is true, then it is no doubt in part thanks to Trump's frequent interruptions — which, as Rachel Krantz of Bustle points out, is a side effect of a culture where "man-interrupting" and "mansplaining" are not just encouraged, but expected.

Fortunately, debates are not judged by the quantity of words spoken, but the quality — and 38 percent was more than enough for Clinton to make her points, with or without the 51 interruptions.