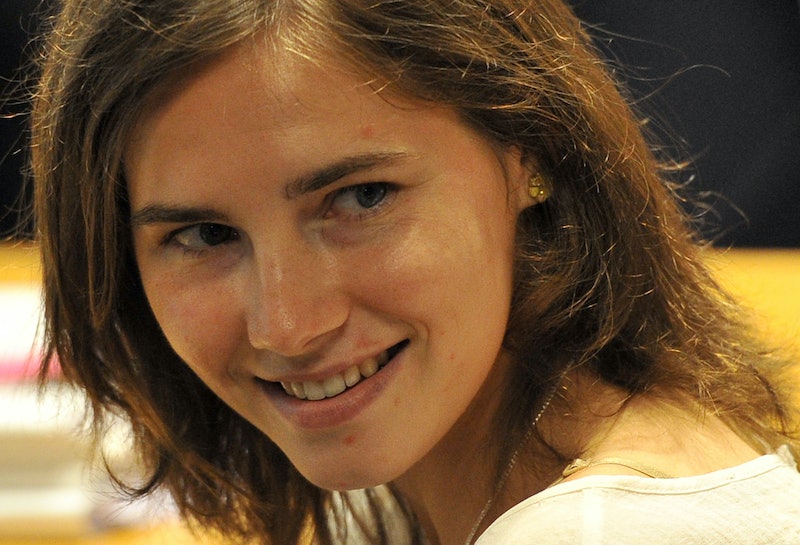 It's hard to believe that eight years have passed since Amanda Knox first skyrocketed into the public consciousness after being accused of murdering her roommate Meredith Kercher while the two were studying abroad in Italy. Knox is a household name at this point, with the international community having spent years in heated debate over her potential guilt. Both Knox and her boyfriend of the time, Raffaele Sollecito, were convicted of Kercher's murder and imprisoned in Italy for four years, eventually being fully exonerated in 2015. Now Netflix has a new documentary titled Amanda Knox, which attempts to tell Knox's story. The doc gives Knox's relationship with Sollecito a particular spotlight, explaining how Amanda Knox and Raffaele Sollecito met, and looking deeply into the relationship formed between the duo before Kercher's death.

The doc explains that in 2007, the then-20-year-old American college student Knox met Sollecito, an Italian, at a classical music concert in Perugia, Italy. In the doc, Knox explains that she attended the concert with roommate Kercher shortly after arriving in Perugia for a study abroad program, and it was there where she met Sollecito, a then-23-year-old computer engineering student. Knox and Sollecito began dating shortly after the concert. Currently, they are not together.

An ABC story from September 2013 detailed an interview Sollecito gave that year with the British TV program Daybreak, in which he described his past relationship with Knox, saying, "It was a teenage romance, it was a blossoming. We were eager to date each other, to see each other every day. But as soon as we dated and we started to have this romance, it was shut down, it was destroyed by events and circumstances."

Both Knox's and Sollecito's lives were turned upside down when they were accused of murdering Kercher and, later, were imprisoned for the crime. Even after DNA evidence resulted in the conviction of Rudy Guede in 2008, both Knox and Sollecito were still considered guilty by Italian courts, and the two went through an arduous process of seeking acquittals. As The Guardian reports, the duo were only definitively acquitted by Italy's highest court in March of 2015.

A Daily Mail story from October 2013 reported that in an interview with CNN's Piers Morgan, Sollecito acknowledged regret at having become involved in Knox, answering Morgan's question about whether he "wish[ed] with hindsight that you'd never laid eyes on her" with a yes. However, the previously mentioned ABC story reported that Sollecito expressed more generous and nuanced feelings toward Knox while speaking on Daybreak, sharing that he and Knox had been in contact in the years following their imprisonment, and that they "are friends." Of their four years in jail, Sollecito said,"We shared letters, we kept each other positive, we gave each other strength." So while their romance may have been long gone, their friendship clearly held strong despite the circumstances.