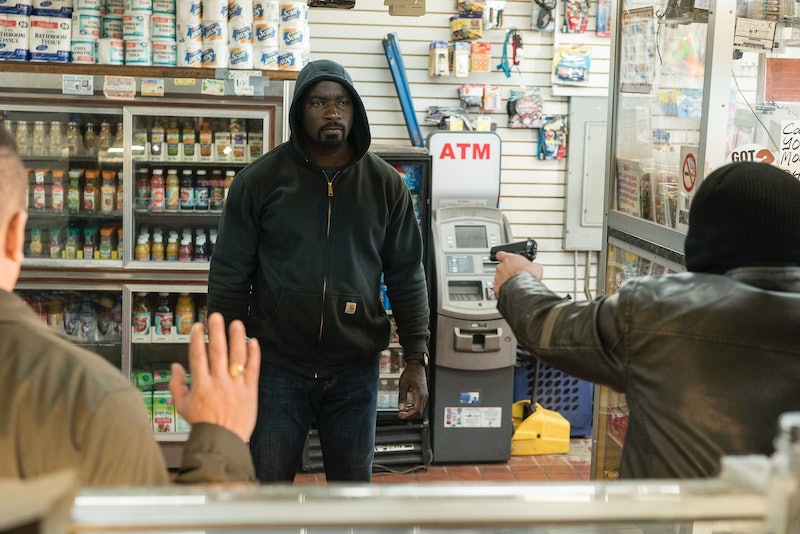 Luke Cage's story seems so perfect for the current cultural climate that you might think that he's totally original to the Marvel Netflix universe. But in fact, Luke Cage's Marvel Comics history goes back decades. While he's not as well known as Spider-Man, Captain America, or some other major characters, Luke Cage has been an important figure in the history of comics, particularly when it comes to the representation of black heroes. His first appearance was in Luke Cage, Hero For Hire in 1972, giving him a nearly 45-year history in comic books before being adapted to the screen.

Now, Cage is a part of the Marvel TV universe. He already appeared in Jessica Jones, as the title character's occasional love interest, where he learned that his wife was actually killed by Jessica while she was under the control of villain Kilgrave and mot killed in a bus crash as he had previously believed. Now, Cage will have his own spinoff, and it's moving from Hell's Kitchen, the neighborhood where Daredevil takes place, and downtown, where Luke met Jessica Jones, up to Harlem, a historically black neighborhood. And if you learn a few things about the character's history, you'll see that this choice of a setting was very meaningful. Here's everything you should know about the Luke Cage comics in order to be adequately prepared for his series when it premieres on Sept. 30.

His Origins Revolve Around A Key Genre

Luke Cage was created in the early '70s as a response to the blaxploitation genre, something revisited in the upcoming throwback comic Cage. Blaxploitation films featured almost entirely black casts, and while the genre includes the formative projects of artists like Melvin Van Peebles and Pam Grier, it often succumbed to portraying black people as criminals who disrespected women and became violent. As Charles Pulliam wrote for Mic:

"Depending on who you are and how you look at Blaxploitation, the style can either be used to reinforce and perpetuate racist ideas about black people, or serve as a means of using camp and humor to unpack and explore difficult conversations about the black experience.

More often than naught, thing that influences a Blaxploitation project to err towards one side more than the other is the degree to which black people — be they artists, writers, or directors — are directly involved in the production of the project. "

The original comics did sometimes fall into such ideas, making Cage a foster child, former gang member, and ex-con (though he was imprisoned falsely), so it may not be surprising that Luke Cage was originally created by three white men. However, Luke's story has evolved in the decades since his creation and it bodes well for his latest incarnation on Netflix that the series' showrunner is Cheo Hodari Coker, a black writer and journalist whose previous projects include Southland and Notorious.

He's Had Other Aliases

While "Luke Cage" may sound like an average name, it's actually a part of his secret identity. According to the character's official history from Marvel, Luke Cage was really born Carl Lucas, and didn't change his name until he gained powers and became a "Hero for Hire."

And while he probably won't be using it in the Netflix show, Luke Cage has another secret identity in the comics — Power Man. Keep that in mind, since there may be some joking or ironic references to it in the Marvel TV universe.

He Has An Arch-Nemesis & Ally

In the comics, Cage grew up with Willis Stryker, who chose to stay in the New York City underworld and wound up becoming a gangster. Pictures from the set show that a character who may be Stryker was filmed fighting with Luke Cage.

Cage has also been paired with Danny Rand, the hero Iron Fist, who's inspired by heightened kung fu films. Iron Fist, like Luke Cage, will be adapted into the Marvel TV universe, so these two characters will likely cross paths on Netflix soon.

And He Had A Memorable Costume

Luke Cage's costume likely won't work in a modern adaptation, but his blaxploitation-influenced bright yellow shirt, tight pants, and chain belt is certainly distinct. The way Luke Cage unabashedly embraces his blackness, no matter what era he's in may have helped him become one of the first iconic black superheroes. Since the '70s, his appearance has changed to reflect contemporary style, and the trailer for the Netflix adaptation rather pointedly features him wearing a hoodie, in a visual reference to the movement started after the death of Trayvon Martin.

His Powers Have A Political Underpinning

According to Marvel, Luke Cage's power set includes being "superhumanly strong, able to lift/press approximately 25 tons, ... skin is steel-hard and his muscles and bone tissue super-dense; he can withstand conventional handgun fire at a range of four feet and cannot be cut by the sharpest of blades." If you've been following the Black Lives Matter movement, then you'll understand why the latter elements are significant. Being invulnerable to violence is a power fantasy that allows black Americans to consider what could come of being able to confront racism — or any conflict — without having to always worry about danger or death.

As the rest of these points have shown, while Luke Cage was originally released in 1972, his story hasn't remained trapped in that decade. His look has changed over the years, as have the problems he faces, like the above excerpt of Cage encountering a pre-presidential candidate Donald Trump.

All of this should assure you that if you feel like you spot a contemporary message in Netflix's Luke Cage (like his hoodie, or other allusions to Black Lives Matter), it's more than likely intentional. Luke has long been a reflection of his time and his first TV series should be just as relevant as his comic book history.

More like this
Rupert Grint Just Shared A *Major* Update About Ron Weasley’s Future
By El Hunt
Netflix Shut Down 'Bridgerton' S3 Rumours About A “Very Dark” Storyline
By Bustle
This 'Gossip Girl' Wardrobe Error Has Gone Viral On TikTok
By Alyssa Lapid
'The Last Of Us' Has Officially Been Renewed For Season 2
By Darshita Goyal
Get Even More From Bustle — Sign Up For The Newsletter
From hair trends to relationship advice, our daily newsletter has everything you need to sound like a person who’s on TikTok, even if you aren’t.