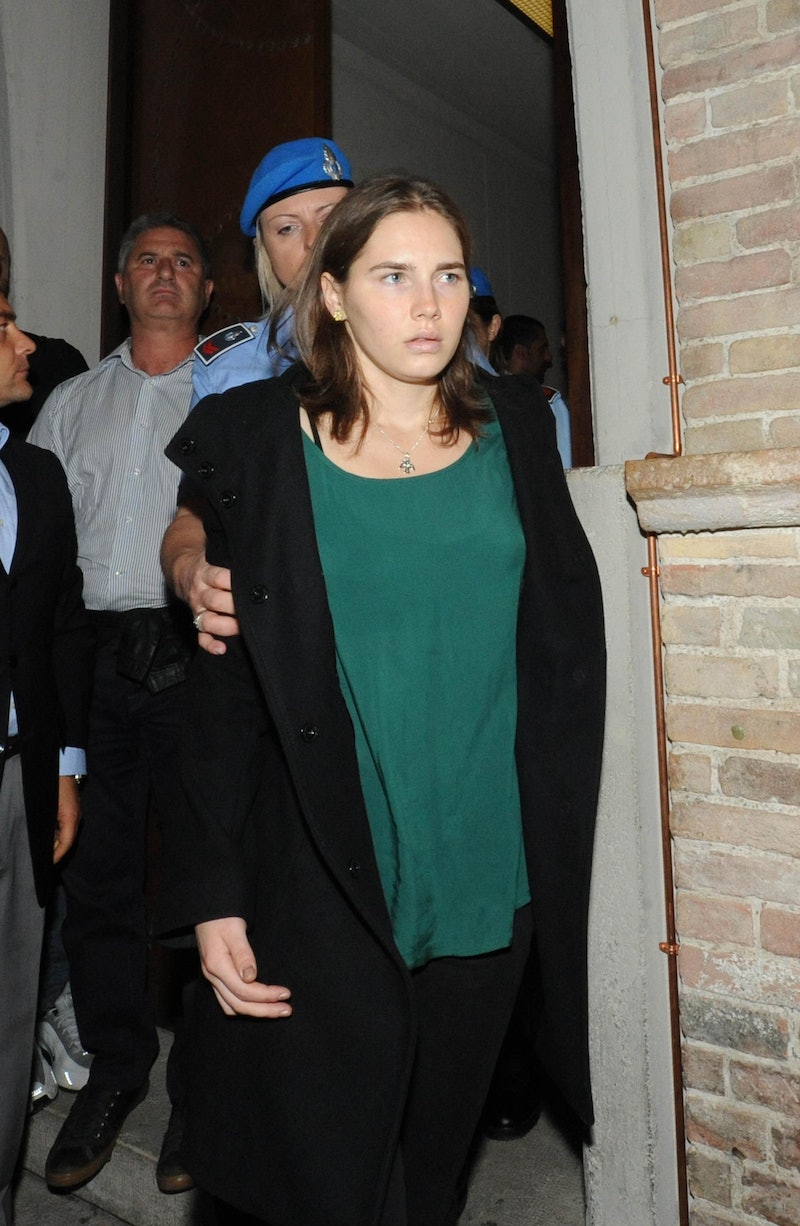 Amanda Knox was famously convicted of, and then acquitted of, the same murder twice, and now her story is coming to the small screen with Netflix's new documentary Amanda Knox. Knox's legal battle began in 2007 when the then-20-year-old was arrested for the alleged murder of her roommate, 21-year-old Meredith Kercher. Knox spent close to four years in prison before being freed in 2011, only to see her case retried in 2013, with another guilty verdict handed down in 2014. Then in 2015, she was declared innocent for good and fully exonerated of the charges. The trials and retrials largely focused on evidence that was eventually ruled unusable, but what was the DNA evidence in the Amanda Knox case?

The new documentary Amanda Knox pays a lot of attention to detail when it comes to the DNA evidence in the case. During the first trial, the two most crucial pieces of physical evidence used to tie Knox and her then-boyfriend Raffaele Sollecito to Kercher's murder were a kitchen knife and a bra clasp. The knife was found at Sollecito's apartment and was touted by the prosecution as allegedly being the murder weapon. It contained Knox's DNA on the handle (which she claimed was due to her using the knife to prepare food), and a small amount of Kercher's DNA on the blade. The bra clasp belonged to Kercher, and was found in her bedroom, where the murder took place. It contained a trace of Sollecito's DNA. No other evidence was found linking Sollecito or Knox to the murder, though.

By contrast, the DNA of Rudy Guede — who is currently serving his sentence for Kercher's murder — was found in numerous spots throughout Kercher's bedroom, including mixed with Kercher's blood in her bag, on a vaginal swab taken from Kercher, and in his bloody handprints and fingerprints throughout the room.

The amount of evidence linking Knox and Sollecito to the crime was relatively tiny in comparison to the abundance of evidence that pinned the deed to Guede, but it was enough to convince a jury of their guilt. However, at the retrial, the DNA evidence was further scrutinized and deemed contaminated by forensic experts Stefano Conti and Carla Vecchiotti, both of whom share their findings in the documentary.

In the case of the knife, the amount of Kercher's DNA present was so minuscule that it could have been disregarded as inconclusive, as, the Netflix documentary points out, an amount that small is almost always the result of contamination. Also, the knife was not examined alone in a sterile environment. Rather, it was examined immediately after the technicians handled and examined 50 items belonging to Kercher that were covered in her DNA.

As for the bra clasp, it reportedly wasn't examined until six weeks after the murder. Police procedure at the crime scene in the interim was allegedly not sterile, as there were reportedly people all over the scene without protective suits, and latex gloves were not changed as often as they should have been, according to the Netflix documentary. The belief addressed in the doc is that it is possible that an investigator could have inadvertently brought some of Sollecito's DNA from elsewhere in the apartment and transferred it to Kercher's bedroom. Also, there were at least two other unknown male DNA traces found on Kercher's bra clasp in addition to Sollecito's — a fact that was omitted when the prosecution presented the clasp as evidence.

The DNA evidence linking Knox and Sollecito to Kercher's murder just didn't hold up, and was justly deemed unusable. It's just unfortunate that it took years for the courts to come to that conclusion.