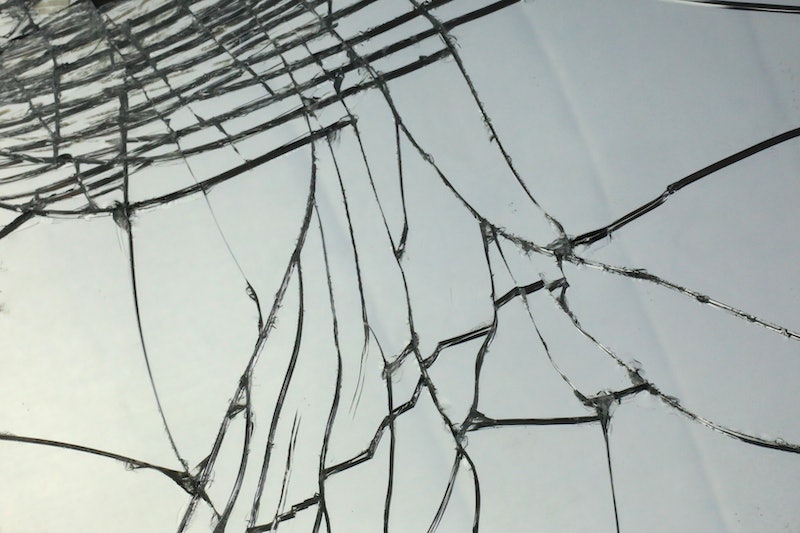 I am theoretically a competent adult woman — a human being who holds down a job, dutifully gets her fire extinguishers refilled each year, and sort of knows her credit score — but I have always been kind of scared of mirrors. I mean, I don't have catoptrophobia or eisoptrophobia, which are the actual medical terms for straight-up fear of mirrors; I've been known to waste massive amounts of time using mirrors to do respectable, adult things, like trying to straighten my bangs. But put me in a darkened room with a mirror and I become, well, basically an idiot.

Why am I so freaked out by darkened mirrors? Do I think that some vengeful, Ring-style ghost is going to come out of said mirror and get me? Or do I think I am going to accidentally look into a mirror and see that a vengeful, Ring-style ghost is already here, hanging around behind me and waiting for just the right moment to dramatically eat my brain-meats? I couldn't really say; all I can tell you is that I have actually moved a motel bed in order to not sleep next to a mirror. No, I'm not proud of that. But I'm a journalist, and I have a duty to report the facts, even when the facts are that I am a gigantic adult baby.

My anxiety around a poorly-lit mirror would seem to imply that I actually suffer from a case of spectrophobia, the fear of ghosts — which is actually often associated with mirrors, because the items hold a lot of supernatural baggage for many of us. But ghosts aren't the end of it — mirrors play a role in many myths as a place where reality and the supernatural meet. So it makes some sense that our culture has so many enduring legends about mirrors, and that said legends are often creepy as, well, a mirror in a dark room.

Surely you've had the pleasure of breaking a mirror and having some helpful person inform you that you have now given yourself seven years of bad luck. You probably did not pause to reflect on this idea too deeply, possibly because you were more focused on making sure to not accidentally step on any shards of broken mirror.

But had you decided to look a bit further into it, you would have found that this superstition stems from the ancient myth that holds that the mirror reflects not just one's external surface, but one's soul, as well. Ancient Romans believed that the soul regenerated every seven years — so if you messed with a mirror, you had to consider your soul equally messed with for seven years, until you could grow a new one. The most important moral of this story? I was staring into a mirror for an hour this morning because I was trying to straighten my soul's bangs.

Ghosts Live Inside Mirrors, Waiting To Attack You

If you've been to a slumber party (or, at least, a slumber party held before the advent of Netflix), then you're familiar with the game "Bloody Mary." Game players enter a darkened room, and chant some variation of the phrase "Bloody Mary" into a mirror a varying amount of times (in my neck of the woods, the go-to incantation was "Bloody Mary, Bloody Mary, show your face" three times, but the legend can call for up to 13 repetitions of the phrase). In some versions, you do it in complete darkness; in others, you clutch a candle or flashlight. In some versions, the woman you're invoking is a murderer; in others, a demon; and in yet other versions, Mary I of England, who was nicknamed "Bloody Mary" during her reign. In all versions, when you're done with the ritual, a ghoulish woman is supposed to lunge out of the mirror and, I don't know, ghoul around at you?

I'm being sassy right now, but I'm sure childhood games of "Bloody Mary" are at the root of my mirror fears — and I'm not the only one; this myth is the basis of the still-good 1992 horror movie Candyman . However, folklorists locate the roots of this story not in an actual ghost who liked to victimize people through the looking glass, but in an older ritual where young women chanted a special incantation in front of a darkened mirror in order to try and get a look at their future husband. Why was he in the mirror? Were he and Bloody Mary having a thing? We'll never know.

And what if you do actually see something in the mirror while you're tromping around in the dark, invoking a deceased British royal? Odds are that you're simply experiencing the Caputo Effect, a psychological effect that leads us to react to sensory deprivation with imagination. When the effect was studied in a lab by placing subjects in front of a darkened mirror for several minutes, they began to think they saw the image of a different face in it — when in reality, they were seeing their own reflection, with added details created by their minds.

Also, no matter what, it's definitely not Queen Mary I coming for you through your bathroom mirror — she got that name due to her taste for putting Protestants to death while trying to re-establish Catholicism as the reigning religion in 16th century England, not her taste for mauling tweens who are bored because they can't get a good phone signal at their parents' vacation cabin.

You Can Access A Creepy Mirror World Whenever You Want

A new twist on the classic mirror game, this Reddit-popularized rite involves setting up candles, a fan, mirrors, three chairs — one that you sit in and two that you place mirrors upon — and then engaging in a series of ritual actions that are supposed to allow spirits or creatures of some sort to take up residence in the mirrors, occupying the roles of "queen" and "fool," and answering your questions.

If you do play this game and happen to see a being in one of the mirrors, which are you supposed to only gaze at indirectly? Yup, more Caputo Effect. And if you hear answers? Well, it might just be a case of pareidolia, a psychological phenomenon where you perceive a pattern where one does not actually exist — which can cover everything from seeing a stain that looks like the Virgin Mary to, yes, hearing words in the rhythmic whirring of a fan.

Or, hey, maybe you are communicating with demons. I'm just some blogger, I don't know what you do in your mirror-based free time.

Souls Of The Dead Can Become Trapped In Mirrors

Of course, the "Bloody Mary" legend isn't juts based on some harmless, pre-online dating romantic fun; it also seems to draw from the ancient, cross-cultural myth that the dead and mirrors interact quite poorly.

In Jewish culture, when someone dies, all mirrors are covered in the house while the members of the household mourn for a week, engaging in a practice called "sitting shiva." According to some old Jewish myths, this is because demons visit homes where there has been tragedy or loss — and while they cannot be seen with the naked eye, one can see their reflection in mirrors (so they're essentially reverse vampires). Keeping the mirrors covered keeps mourners, who are already dealing with enough problems, from being startled by the sight of these death-loving goblins. (More commonly understood reasoning holds that the mirrors are covered because praying before mirrors creates a chance that the person praying could become distracted — which is a totally reasonable explanation, so where's the fun in that?)

In some German and Dutch cultures in the past, mirrors were covered up after a death because it was believed that catching a glimpse of yourself after a member of your household died meant that you would go next (and soon). Some historians have documented an older Chinese superstition that held that if a corpse is taken past an uncovered mirror, they will become a ghost. Some old Irish beliefs also held that the soul of a dead person could become trapped inside a mirror that was brought near the body. Rituals involving the covering of mirrors after death were also found in some Indian, English, and Scottish cultures.

But in Victorian culture, the practice of covering mirrors became non-denominational; supposedly all the mirrors were covered when Abraham Lincoln's body was laid out in the White House.

What are you supposed to take away from all of this? Beware of mirrors? Or at the very least, don't stare into them in a darkened room? It's not for me to say; but I hope the next time someone tells you about messing up their back moving a motel bed away from a mirror because it was just too freaky for them, you'll have a little more empathy.