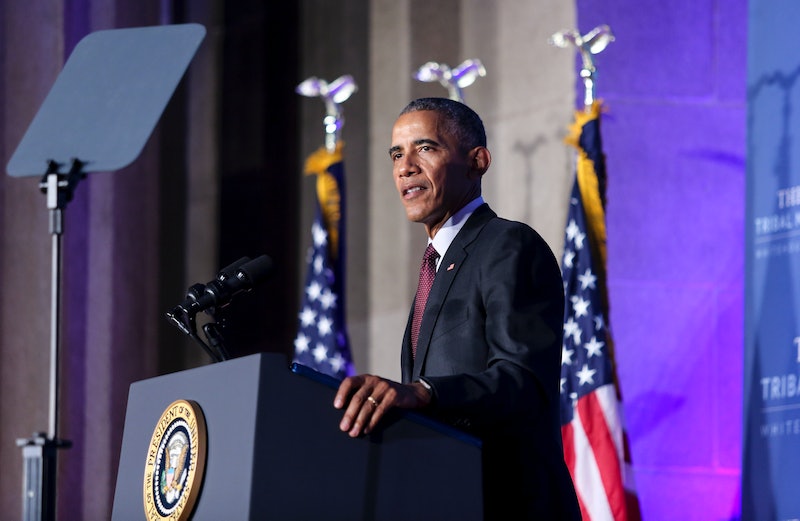 When a politician is elected to the president of the United States, regardless of how much they've prepared for the role, there are certain things that they just can't predict or immediately know how to navigate. In the past nearly eight years of President Barack Obama's presidency, he's had to find his way through so many challenges, vetoed bills, criticism from every direction, and many more bumps in the road. Now that he is about to leave the White House, he's taking some time to reflect. On Friday, Jimmy Fallon aired an interview of Obama giving advice to his newly-elected self.

It's a short video, but Obama's first piece of advice to his 2009 self is poignant and very telling. It's easy to miss in a segment that's trying to get laughs from the audience about the weariness of presidents as they exit the office. He says, "I promise you, if you occupy this job long enough, you're going to, in some ways and some areas, fall short of the ideal." The 2009 Obama quickly responds that "You certainly shouldn't be punished for that, that's just piling on." But Obama's point about falling short of the ideal is an interesting concept to think about. Does an ideal president really exist?

Because our country is governed by three branches, the president will, rightfully, not hold so much power that he or she could take action on his or her own (with some exception). Presidents, like Obama, enter the White House thinking that it is finally their time to make a difference in the country. Yet, because governments are made of people, and people are imperfect, things don't always go so smoothly.

Obama so much believed that he could affect change while running for the presidency that his campaign slogan was the word "Hope." It was infectious, and voters trusted that he could bring about the change that they were looking for. But no matter how much one president accomplishes, there will always be those who claim he or she was a failure. While that's certainly a valid opinion, maybe it's time to recognize, as well, that the likelihood that a single person can step into the role of president and solve all of our problems is a flawed idea.

It's heartbreaking to watch Obama admit that he has felt that he has at times fallen short as a president, and it also reminds us that he is a human being, and doing all that he can. The fact that Obama thinks about his shortcomings is endearing, and it's also evidence that his motives are pure.

Throughout the 2016 election, people have referred to voting for Hillary Clinton as the lesser of two evils. Yes, she has made mistakes, and her email scandal certainly would have been a bigger deal if her opponent was more capable than Donald Trump, but she also has extensive experience in public service, knowledge about public policy, and the temperament to keep up relations with the rest of the world and provide a safe country for citizens. If that is not enough, what ideal are we holding our presidents to?

The public is completely within its rights to question a president or presidential candidate on his or her experiences and effectiveness, as it is an extremely important job that affects people's lives. But it's also would help to remember that presidents are people, too, and there's a good chance that they are doing all they can to get the job done and move our country forward.