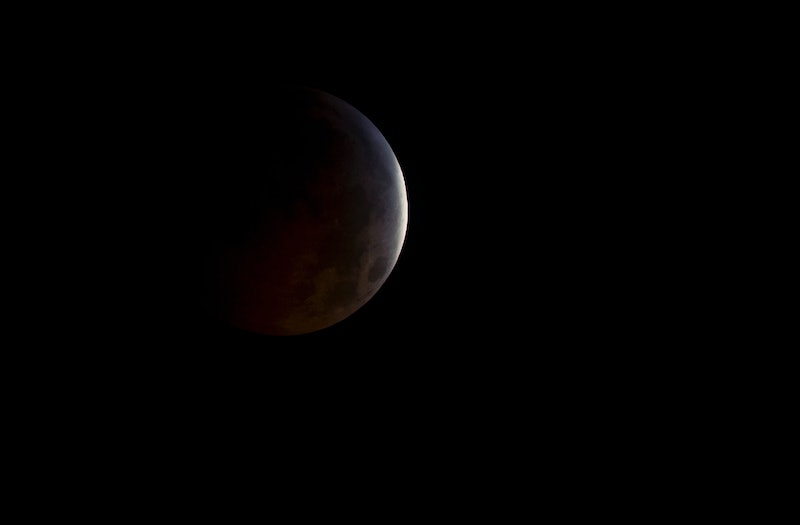 Say what you will about other current events, but 2016 has been a series of delights for anyone fascinated by the stars. You may have heard that this week brings yet another astronomical event you'll want to experience, but what is a Black Moon? It sounds like something straight out of Edgar Allan Poe's imagination, but the event isn't quite as Gothic as you'd think — well, no more so than any other new moon, which is still pretty darn Gothic.

But I digress. What makes a Black Moon special isn't the phase itself, but its timing: A Black Moon the second new moon in a single month. Basically, it's a Blue Moon — the second full moon in a month or season — directed by Tim Burton. In contrast to a full moon, when the side of the moon facing Earth is totally illuminated by the sun, a new moon occurs when the side of the moon facing Earth is enveloped in shadow. (The moon doesn't generate any of its own light, so we're only able to see it when it reflects light from the sun.) Unfortunately, this means you can't really see a new moon; it's a black patch in a black night sky until the moon begins to wax toward a full moon once more.

So you won't actually be able to see the Black Moon this Friday, Sept. 30, but it's still worth celebrating. According to Space.com, Black Moons are fairly unusual astronomical events, occurring approximately every 32 months. The last Black Moon took place in 2014, when there were two new moons per month in January and March. Since then, there have been all kinds of celestial events to keep us occupied, including supermoons, meteor showers, and two types of eclipses, not to mention all the Ophiuchus business we've been seeing lately.

Although they aren't particularly enthralling viewing, Black Moons have some religious significance. New moons are generally important in paganism and Wicca, and some followers of Wicca believe that Black Moons are a time of enhanced spiritual power. Earlier this week, UK tabloid Express reported that some conspiracy theorists claim the black moon is a sign of — what else? — the end of times.

The Black Moon will only occur in the Western Hemisphere this week, so presumably residents of the Eastern Hemisphere will be spared all the doom and destruction. (According to Weather.com, the new moon doesn't rise until after midnight on that side of the globe, so it technically occurs on the first of the month, exempting it from Black Moon status.) But if you live in the Western Hemisphere and want an excuse to throw a lunar-themed party, the black moon officially takes place on Sept. 30, at 8:11 p.m. Eastern Daylight Time. New moons make for excellent stargazing, so it's a win even if you try (and fail) to see the black moon in action.

In the meantime, anyone who prefers the flashier celestial events can use the black moon as a chance to start planning for the Orionids meteor shower in October.